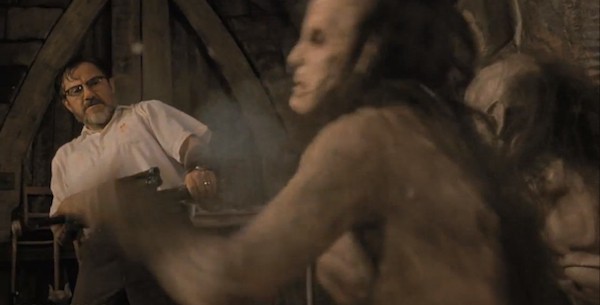 Priests throughout the history of cinema have really had to evolve along with everyone else and they’ve had to do so even more really since thanks to the ideas and subjects that have been pushed by films those playing the part of holy men in them have had to adapt. The priest is no longer just the bystander any longer, especially in the 90s. They had to be combatants as much as holy men in some cases, and had to stow their holier-than-thou attitude a lot to get down and dirty in order to make sure that the people they were protecting came out in one piece. Some of them were even corrupted during this time and some of them were in danger of losing their faith. But the best thing about priests in the 90s is that they were starting to take on more of an aggressive quality when it came to combating evil in its various forms.

Here are some of the best priests from the 90s.

Kiernan had serious doubts about a lot of things when it came to his faith since he was the guy that was sent to investigate the authenticity of certain religious phenomena and prove or disprove them. Of course many people had serious problems with this since being a priest he was supposed to operate on faith and little else. This movie didn’t so much demonize science as it kind of left science to do its own thing while it turned upon itself for the most part. While religion is still a big thing throughout the world and many would rather die than admit that their faith is false, this movie attacks the core of religion by stating that many upon many people have the idea of religion all wrong.

Father Kovak is basically the only guy that will get in Arnold’s face and tell him what’s up when it comes to the end of days, citing just what he believes and what is already happening. He’s also the only one that decides to stand up and say that killing the young woman that is meant to be Satan’s bride is wrong, that they’re only doing evil by trying to prevent evil. He even stands up to the avatar of Satan but gets rudely slapped aside for his efforts. Give props to this guy, he stuck around the entire time until he was basically pimp-slapped out of the way by a power that none of the priests were ready to face.

So this is and isn’t accurate since the presence that is committing the atrocities in this film is doing so by using the body of Father Karras as a means of refuge until it escapes to use others to do its bidding. That alone is scary enough since it means that Karras can’t possibly fight back considering that he’s too weak and was perhaps not ready for this invasion. While he was awesome in the beginning and was definitely the one that was there to start with when everything first kicked off, Karras is kind of a minor role in this one, though he’s an important role all the same that can’t be erased.

It’s funny how the young priests in many movies are still idealists and still think that the world is going to make sense when they want it to. Many of them will claim that this isn’t so but when the world reaches out and slaps them full force in the face they still aren’t ready. This is pretty much what happens with this young priest when he figures out that the man he’s been following so dutifully for so long is in league with the master vampires and is willing to trade his humanity in order to become immortal. At that point the young priest makes a decision that will rock his world even more.

1. From Dusk til Dawn – Jacob Fuller

In this movie you’re given the impression that Jacob has fallen from grace since he hasn’t practiced since his wife died and he lost his faith. But when the group inside the bar needs him to step up he’s able to do so as he turns the most mundane items into weapon that are absolutely lethal against the undead. Imagine being able to throw a water balloon at a vampire and have it burn them the same as acid, or douse them with a Super Soaker and create the same effect. His makeshift cross is pretty cool as well since it offers him some form of protection and then becomes a weapon in the next second. Hands down this is the meanest and most awesome priest in the whole bunch.

In the 90s a lot of movie characters had to get harder, but priests had to step up in a big way.