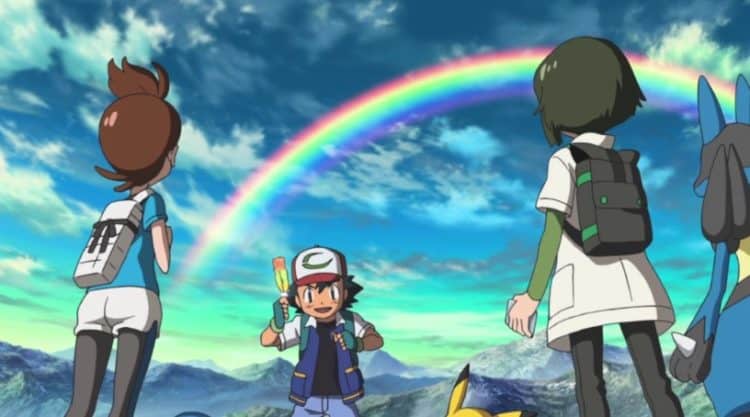 If you look at Pokemon from an adult perspective you might find it kind of disturbing largely because the trainers catch the various creatures that make up the game and make them fight for sport. But if you’re a kid then it seems perfectly okay since it’s fun, colorful, and no one ever seems to get permanently hurt, at least not on a regular basis. But since its inception in the mid to late 90s Pokemon has been a craze that has gripped a great many people and managed to emerge as one of the most dominant kids shows that’s ever been created. Seriously, it’s outlasted a good number of other shows and has swamped many others when it comes merchandising and the everlasting need to see more of the franchise as it continues to expand. Remember the vast number of people that were having issues taking their eyes off of their phones not too long ago when Pokemon Go came out? Yeah, that’s how addictive Pokemon is.

But the movies are the real test of how popular it’s become since if something can make it on the big screen or even on just a straight to DVD release then it’s become something that you simply know is bound to stick around. Here are five of the top Pokemon movies ever made.

This movie is pretty much led by Ash, Latios and Latias and it stands out as a testament to the friendships between the people in the series and the Pokemon. This is after all a big part of the franchise and is ultimately very important since if the Pokemon and the humans can’t trust one another then there’s really no show, or at he very least things would be very, very different. The action sequences in this film are quite impressive and help to capture the absolute joy of roaming the world with your BFF at your side. In this film you can really get the feeling that the humans their Pokemon friends rely on one another quite a bit and are fully aware of the relationship that needs to exist between them.

4. Lucario and the Mystery of Mew

For the most part a lot of people love Mew, which is obvious since if you go ask anyone that likes Pokemon you’ll likely find that an entire generation can recall the many hours it took trying to obtain this highly-prized Pokemon. Despite lacking legendary status Lucario is also a very loved character. It’s mostly to this movie but hey, a Pokemon that people love in this manner is something that means a lot more than status sometimes. Mew plays about the same role in this movie as in the first, basically a sidekick to Ash. Lucario is the stoic and very loyal partner to Aaron and the bond they share rivals that seen between Ash and Pickachu, meaning that it’s something quite strong that isn’t easy to test.

It’s difficult sometimes to make a sequel since they’re doomed to be a poor copy of the first film or are going to suffer in some other way that will make them seem ultimately inferior. Pokemon 2000 managed to avoid this however since the movie does tend to focus more on introducing many more first generation favorites into the film and brings all three legendary birds and Lugia to the party. That attention to detail is what kind of saved the day for this film, plus the truce with Team Rocket kind of put a different spin on things since it opens up the film for much better battles with Articuno, Moltres, and Zapados. It’s one that was definitely played up for the fans.

Eventually every franchise gets a little stale, and after two decades you’d almost expect that Pokemon would have been running on fumes, but you’d be wrong obviously. The 20th film in the franchise was one of the best and it does help that there was a new, alternate manner of telling Ash and Pikachu’s earliest adventure that kept the old lore and yet still introduced a new dynamic between the two. That’s looking out for the fans and introducing something new at the same time and it’s something that many franchises could take a lesson from. This is great for fans both new and old and the only reason it doesn’t get the top spot is that it features Pikachu doing the one thing you never get to hear except in this movie. He actually speaks. Yeah, that’s kind of a different spin that a lot of people weren’t expecting.

About a year or two after Pokemon got truly big and was making headlines and carving a well-defined path throughout the animated world some folks thought that it couldn’t last, that it would eventually just fade away into nothing. But then in 1998 the first movie came out and that was the beginning of the end for doubters since this became the first bar and possibly the highest to reach for any and every movie that came after. The origins of Mew and Mewto were huge driving points that made this movie work and despite having some flaws it was still the best and the most influential of all the movies.

Yes, Pokemon is likely to still be popular when our kids are adults.