Home
Movies
The Five Best Prison Movies of the 90s 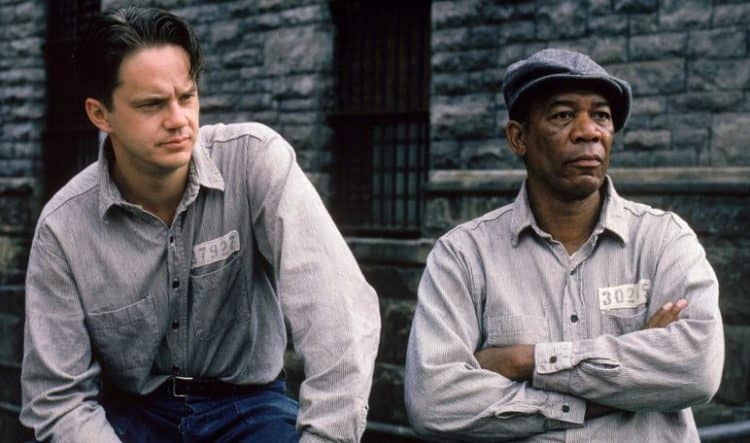 Prison movies aren’t supposed to be particularly funny unless they’re built to be comedies, but something about the prison movies in the 90s seemed to elicit a bit of melancholy laced with humor at critical moments that just couldn’t be avoided. In some of the movies from this decade it was easy to notice how the levity kind of relieved the tension, but in other moments it was as though it was carefully crafted to remind people that they were watching a movie and not a real account of what might go on behind the walls of any given institution. This decade certainly put a great deal of edge into many movies, but it also managed to bring in a fair amount of evolution in terms of showing people something of the truth while at the same time reminding them that prison wasn’t pure entertainment. If anything these movies are masterful strokes on why a life inside is anything but agreeable.

Here are five of the best prison movies from the 90s.

5. In the Name of the Father

In a movie it’s easy to think that someone could get away with locking a person up on a forced confession and by withholding any evidence that might exonerate them, but the fact that it might happen in real life is something that seems quite abominable. In essence it’s an attempt to find a scapegoat because the people in charge of law enforcement can’t do their job properly. When the police bungle their investigation and jail the wrong man before finding the right person they don’t want to look incompetent and so they bury the evidence. Thankfully there are people in the movies that are set up to find these missing pieces of evidence, just as there are people in the real world that will risk everything to get the truth.

Hatred is exhausting. It’s tiring, it’s pointless, and unless it’s what you’re using to fuel your need to continue forward, it’s a self-fulfilling prophecy that leads only to one place, the absolute bottom level that any human being could hope to reach. The blatant racism shown in this film is doled out in great quantities to make a massive point, and while it’s horrifying to think of what has happened and that what’s depicted in the movie has its basis in reality the turnaround is something that many would gladly aspire to. Derek’s unrelenting hatred for anyone that’s not white swiftly turns around during his time in prison, especially when the faith he’s exhibited is betrayed so casually by those that claim the same ideals he initially does. Hatred is its own worst enemy at times after all.

Some criminals just can’t catch a break no matter how smart or talented they are when it comes to staging a breakout. Jack and Buddy are a good pair in this movie but at the same time it’s a wonder why Jack would continue on with Buddy when the latter has to confess everything and thereby ruin whatever they’re doing. One of the upsides is that Jack is a smart man, but he’s also a habitual criminal. He doesn’t do the 9 to 5 and he certainly doesn’t appreciate being disrespected by those that he helps out. So unfortunately he goes and he makes poor decisions on who to partner with and what score to chase after, which keeps landing him in the pen time after time.

Believe it or not prison does include some of the worst and best of humanity all at once. Back in the days when a person could be jailed for the mere suspicion of having done something horrible there were in fact people that were jailed just because they appeared to be guilty. Whether or not they’d done anything other than what they were being held for might be in question, but in this movie the miracle that was John Coffey was on death row for what appeared to be a heinous crime. In the end however the real killer finally got his due and the resident bully of the mile finally got what was coming to him, a nice long stint at the loony bin.

People do things to get in prison, there’s no other way around it. No matter if they want to tell you a story or spin a yarn that you might find compelling enough to believe, most men are in prison for a very good reason. That’s why men like Andy are so interesting since he didn’t do anything that was deserving of such a fate. He didn’t kill his wife, didn’t kill her lover, and despite evidence to the contrary he was still sent up for it. The worst part however came when the warden figured out a good use for Andy as his accountant. If not for his escape Andy might have died in Shawshank an old and beaten man.