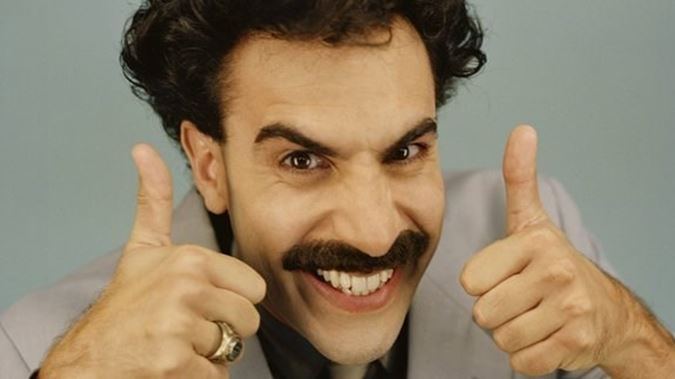 Putting it mildly, Sacha Baron Cohen has been a guy that has developed a talent for really ticking people off with his films. He’s had just as many fans rally to his cause and his movies as detractors, but there’s no denying that he’s truly gone out of his way to make a bit of controversy now and again. As time has gone on however he has managed to tone it down and create characters that are a little easier for a lot of people take, though early on when his career was really taking off he didn’t seem to mind the fact that his act was really disturbing a lot of people. On one hand it was kind of inappropriate at times, but on the other it was something that a lot of people thought was hilarious in their own way. That’s show business however, what one person laughs at another might find increasingly offensive. Ah well.

And here we go with the offensive films. In this movie he plays the part of, you guessed it, a dictator that has no respect for anyone and is planning to address the UN about their decision to invade his oil fields because he refused to allow access to them. Throughout the movie however he kind of proves why he’s not that worthy of a leader and even meets up with people he thought he’d had executed earlier in his rule for very minor transgressions. By the end of the movie he’s been married, opened up his oil fields, and sought to instill democracy in his country, though of course he still favors himself in many ways when it comes to who has the most to gain.

To be quite honest Girard isn’t the bad guy in this film though it would appear that he’s being made to look that way at times. Yes he’s out to beat Ricky Bobby and yes he’s kind of a pain in the butt, yet for all that he’s not the real antagonist, he’s just another racer trying to do his best. Some might call that an attempt to humanize the bad guy but in competition there really is no bad guy unless someone decides to go off the rails and attack another person in a manner that goes against the competitive nature of the sport. Girard isn’t impressed by Ricky Bobby at first, but he’s not the villain either.

When you boil this one down it all comes out that Bruno is basically trying to get attention, which is what a lot of people have thought about Cohen for a long time now. Yes he’s calmed down throughout the years, but as Bruno he was truly doing things that shook people up and set them firmly against him since if you ever watched the movie you know just what he did. The sex acts, the trading of a baby with electronics, the bid to get famous at any cost, and so on and so forth. If he was ever being this serious in really trying to get famous, which some have argued he was, then the future of entertainment would have been in serious trouble.

Simply put this is probably the most engaging and dynamic version of this song that’s come along since the play came out. Les Miserables has long been a favorite of many and the songs that are sung throughout have touched a great many lives and inspired one person after another as they’ve picked out their favorites. This one about an innkeeper and his wife that basically rob their guests blind, sometimes almost literally, is kind of amusing since they’re two of the worst people around and yet they’re making do in the only way they know how. In fact this is probably one of the most amusing scenes in the whole movie.

Borat actually left people wondering how Sacha Baron Cohen wasn’t in jail at some points since the film, shot in documentary style, wasn’t something that a lot of people were ready for and it was kind of obvious that those on film had no idea what was going on. The harassment charges alone would have been something that might have gotten him in trouble if not for the fact that he was shooting a film and the scenes were apparently necessary. This is one of those cases in which the movie was hilarious to some people but a giant joke to others since it didn’t make a lot of sense and it was almost like a giant gag reel that didn’t end soon enough.

He’s either a genius or a goof, according to a lot of people.