Home
Music
The Five Best Songs from the Trolls Soundtrack 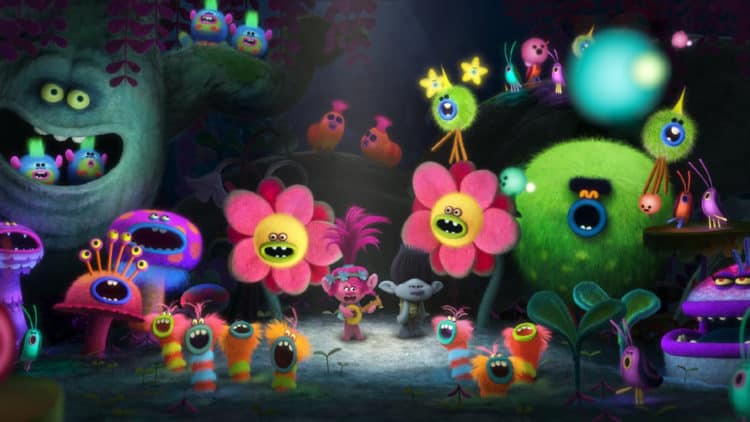 Really all you need to know about the movie Trolls is that the Trolls are happy and satisfied little creatures that love to be positive and have a good time, but the Bergen’s are bent on eating the Trolls since this is the only way they can be happy. When the Bergens attack and capture the Trolls, Poppy, their princess, goes on a quest to save them and eventually encounters Branch, one of the most unhappy Trolls to ever exist. While he eventually agrees to go on the quest with her his constant and rather depressing attitude is something that doesn’t really change until he finally starts to come around and has to help Poppy regain her color. At that point Branch regains his color as well and they set to releasing their people while at the same time convincing the Bergen’s that they don’t need to eat Trolls to be happy.

5. Get Back Up Again

From the start you kind of get the idea that Poppy is a little naive when it comes to venturing too far away from her home, but her upbeat attitude is just enough to make her keep going all the same since it’s incorrigible and allows her to kind of plow forward with an air of assurance that she’s on the right track and will do whatever it takes in order to get her people back. That’s the kind of positive, ‘can do’ attitude that a lot of people tend to like but not a lot of people tend to exhibit sometimes. One explanation is that no matter how good it feels, it’s kind of exhausting to be that upbeat all the time.

As you can see from the movie the Trolls just like to have fun all the time, but that does kind of become their downfall since the Bergen’s are able to find them when they get to partying and capturing them isn’t much of a hardship at that point. But the reason why Branch never takes part in the parties is that he feels guilty about his grandmother being taken by Bergen’s when he was little since he was the one that was singing and thereby it was his voice that led the creatures to them. That’s why his color is so much different than the other Trolls, because he’s given into the negative emotions.

The only thing worse than losing your spirit, your sense of happiness, is knowing that you can’t do much to bring it back. There are always those moments in life when you might feel helpless, troubled, trapped, and in no way able to make it back to your happier times. But with friends, those that care enough to make it worth trip back, you can find a way back to the light that helps us shine as we were meant to since the day we were born. The Trolls remind us that deep inside is a sense of power that we don’t always realize we have, a brightness within that comes from a place that is never allowed to fully extinguish.

When a lot of people first saw this was coming out the general idea was either that it was going to be cute and awesome or it was going to be something that they would have to take their kids to and suffer through. In retrospect it was a pretty cute movie and something that was actually geared towards adults as much as kids since, quite honestly a lot of us can remember Trolls being a part our younger years. Who would have thought that those cute little critters that you used to see everywhere would one day inspire a movie? Ah well, it was a decent movie and something that kids really enjoyed.

To be quite honest it would seem that if pop culture wasn’t used to make this movie it wouldn’t have done even half as well as it did. This addition was a great way to bring this move to the audience since it helped them relate to it and get the overall message that was being conveyed at the same time. That alone is worth the thought of going to see this movie or, at this time, to go out and either buy a copy or rent it wherever it’s available. It does convey a very positive feeling that could be called a good life lesson for kids and adults alike to learn.

It didn’t seem like it was going to much of anything when it was first revealed, but the actors and the music helped to make Trolls into something that kind of defied expectations. That being said it’s a movie that you might not watch all the time, but it’s still one that’s worth taking a look at.