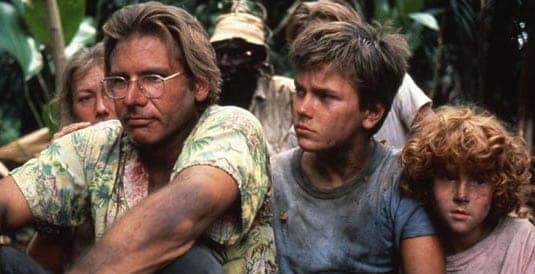 It’s kind of tough to think that anything Harrison Ford has done is underrated, isn’t it? Well to be honest a lot of performances have usually been noticed without fail, but there are those that are overshadowed either by his own level of fame or by the work of others since it’s become very easy to believe that as great as he is, Harrison Ford has been pushed to the side a bit in a few movies. Thankfully this isn’t really a negative since he’s still a living legend, or will be at some point, but it’s still amusing to think that any work he’s done could be underrated in the least bit since he’s one of the best actors in the business at this time. But it’s possible to lose track of his works now and again since he’s stood on-screen with some truly talented individuals that have drowned out his character a bit, and some of his movies have flown under the radar over the years and have been drowned out by his other successes, thereby making them less effective than usual. But most of his movies are still worth watching no matter that they don’t get mentioned as much these days.

Here are a few of Harrison Ford’s most underrated movies.

It’s very easy to say that this is a revenge story since the payback never appears to end as Frankie goes on his way to get revenge for those that have been taken from him. But without knowing the true reasoning behind why the IRA and the British have been at odds for so long it’s a bit hard to follow, and one can get lost pretty quickly. But the fact that the fight was brought to America in this movie and ended up involving a retired cop’s family is enough to give the story a bit of a punch since taking someone into your home and then having to deal with the mayhem they brought with them is hard to excuse.

For the time it was released this movie was actually pretty effective since it had a decent story and just enough action and other material to work. As I mentioned above, time and other accomplishments have a tendency to bury anything since otherwise, this movie is actually pretty good. The whole dirty cop angle has been worked over so many times that it might have gone stale by the time this movie was made, but the hiding among the Amish element was something that not a lot of movies do for various reasons. But in this movie, it worked in a very big way since it gave it a bit more character.

There’s one big reason that this is underrated when it comes to Harrison Ford, and it’s because this movie really belonged to Chadwick Boseman, who was playing the part of Jackie Robinson, one of the most influential baseball players to ever play the sport. As Branch Rickey, Ford did his part for this movie as one of those that actually supported Robinson and was very convincing when it came to playing Rickey, who was adamant about breaking the color barrier in baseball and worked diligently to make it happen. If you want to know just how hard he worked in real life, it’s not hard to find.

Sometimes the best intentions are the ones that tear people down the quickest since Allie comes off as the kind of guy that wants nothing but good things for his family, but his disdain for anything having to do with the United States makes it obvious that he’s going to say and do anything that will keep his family from returning. The major downside of this of course is that he ends up lying to his family as he continually attempts to keep them in his ‘utopia’, which continues to crumble down around his ears until finally he’s paralyzed in a shootout and dies sometime later, which allows his family to return to the states.

This is actually one of his best movies since it details the life of a very miserable human being, even if he doesn’t realize how truly miserable he is since he’s successful and powerful but still a humongous jerk. When he suffers a gunshot to the head though his entire mood changes as he loses a great deal of who he was, becoming almost childlike in his manner and needing a great deal of care. Once he starts to recover though he eventually realizes the truth of just how miserable his life was and begins to change in a big way, creating a happy ending that is actually easy to get behind.

Again, it’s hard to think that he has any underrated movies, but they’re out there.