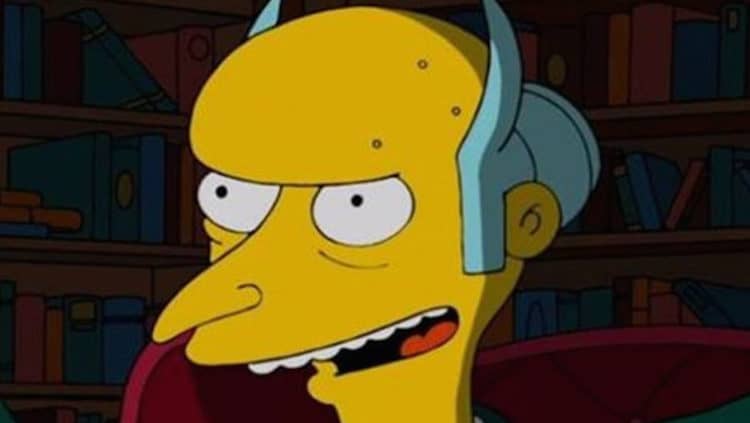 Montgomery Burns is by far and large one of the worst characters when it comes to The Simpsons since he’s not even acting on his nature unless his natural state is to be the most vindictive and evil human being imaginable. That might not be too far from the truth since seeing him as a child in an episode made it clear that if he had the chance to make money or love he was all about the money. But while he’s shown hints of humanity here and there he’s brushed it aside rather casually at times by being the worst person he could possibly be, reasserting the idea that he is evil incarnate in a very frail form. In many ways, he is kind of the devil in The Simpsons, as he outdoes Devil Flanders in a variety of ways that are easy to describe given that he’s never really sorry about anything he does and he’ll gladly take what he wants without offering anything for it in return. At least Homer got a donut when he sold his soul, Burns probably would have promised the treat and then yanked it away at the last second after taking Homer’s soul, with a team of devilish lawyers there to make certain that there were loopholes he could use if possible.

Here are a few of the worst things that Mr. Burns has done on The Simpsons.

5. He stole the Simpsons’ puppies.

It takes a truly demented mind to think about killing and then skinning puppies to make a coat, but when you’re talking demented and cruel you’re talking the kind of language that perfectly describes Mr. Burns. The fact that this was something that had been done in the past with respect to Disney is all well and good, but Burns kind of rivals Cruella DeVil when it comes to their overall depravity since both of them are rich, eccentric, and so over the top nuts that it’s hard to think that they wouldn’t get along somehow. But while this was definitely a diabolical plan, it wasn’t the worst thing he’s ever come up with.

The fact that Springfield has a very inept system and a mayor that is routinely caught in one scandal or another would be appalling in real life, wink wink. But the fact that Burns’ company has been dumping toxic waste into the water supply for so long is something that has been brought up on the show but has never really been remedied in the long-term. Seeing as how this has been happening on the show for so long it’s easy to say that Burns isn’t bound to be taken to task for something that is more or less accepted on a ready basis. In real life, this would be a huge issue, but in the show, it’s another part of life.

3. He tried to seduce Marge.

Seriously, trying to seduce another man’s wife, especially a man that happens to work for you, is about as scummy as some people can be, but this isn’t even the height of Burns’ disturbing behavior since he can only get worse and worse. But thinking that Marge might actually do anything other than pity him is amusing enough to make this storyline worth it since Homer might be kind of a moron, but Burns is just one step shy of being an actual ghoul since the guy is decrepit in ways there aren’t even words for. So yeah, this was bound to be something that wouldn’t have a chance in hell of happening.

2. He actually blocked out the sun at one point.

Well, to be fair, he blocked out the sun over Springfield, which was something that was both cruel and highly unusual since a lot of evil characters wouldn’t even think of doing such a thing unless it was something that was bound to be an act of perfect revenge or the best way to mess with an entire town. It’s stuff like this that makes a person wonder just how Burns has never been replaced on the show after the other characters get tired of him and decide to get rid of the guy. But then one has to remember that he’s the perfect villain because people tolerate him and his schemes don’t always work the way he wants.

1. He tried to kill Bart and Grandpa Simpson.

It was funny to see that Burns and Grandpa Simpson had anything in common, but it was even funnier to see them square off as they tried to vie for the same prize. The fact that Bart was caught up in it was even better since he could have made things worse in a heartbeat. But in the end, it became obvious that things were going to go on as they always had, as this is the way that The Simpsons works.

Burns is a bad guy, but he’s a tolerable bad guy…kind of.