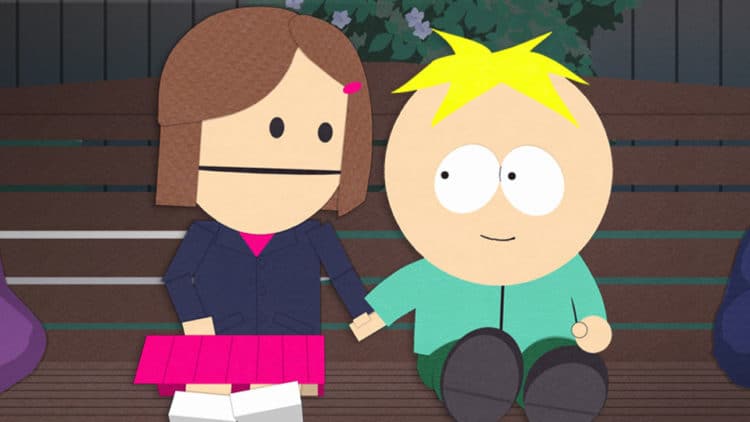 Time to go on down to South Park and have ourselves a time. Well, there is one particular child in that town that doesn’t always have quite the time. His name is Leopold Stotch, better known to the fans as “Butters.” Fans that have been keeping up with South Park since the very beginning should know that Butters is not exactly the most popular kid on the block. In fact, he is probably the most naÃ¯ve, gullible, and dorkiest kid you will ever see in any form of media ever. While these character traits have made him a popular character on the show, it has more than often gotten him into quite the pickle. He has been a replacement for Kenny as the “fourth friend” in Stan, Kyle, and Cartman’s little circle, and subsequently adopting the alter ego of Professor Chaos, constantly claiming to dominate the world (although it usually goes nowhere). Butters’ main role in the group can best be described as the stooge or fall guy of the boy’s schemes and pranks. In short, while he is a significant character in the show, he is ninety percent of the time used as a patsy, which also makes him the greatest comic relief on the show. Poor Butters has been the victim of so many pranks gone wrong that we cannot but help feel sorry for him, but let’s face it we still think it’s funny. Oh hamburgers, it is time to reveal the top five worst things that has happened to Butters in South Park. Gee whiz, where to begin?

5. Being Manipulated Into Becoming Overweight and Then Getting Liposuction (Jared Had Aides)

When Butters became the new fourth member of the main South Park friend circle, he was often used by the boys as their personal stooge. If they had a ludicrously far-fetched idea and needed someone to do all the dirty work and take the fall if something went wrong, then that’s where Butters came in. One of their most famous schemes was to get Butters to gain a lot of weight and then lose it by supposedly eating only City Wok food, making them tons of money similar to how Jared Fogle made the big bucks by losing weight and supposedly only eating Subway sandwiches. The boys make Butters eat until he pukes and then make him eat his own puke (gross), and when Butters fails to lose the weight on his own, they decide to perform their own liposuction surgery on him. It of course goes horribly wrong and Butters ends up getting grounded as a result. The boys later convince him to defy his parents while Cartman covers for him, except Cartman speaks to his parents with crude language over the phone while imitating Butters. This prompts Butters’ parents to come home and mercilessly beat the confused Butters while Cartman sits outside of his house happily watching as he’s eating popcorn. A lot of bad things happen to Butters in this episode, but it’s the best example of showing Butters as the stooge of the group.

4. Being Bullied by His Grandma (Butterballs)

Being bullied is no laughing matter, but when Butters is revealed to be a victim of bullying by his ruthless grandmother, it certainly makes us laugh in typical South Park fashion. The evil grandmother steals his lunch money, gives him black eyes, stabs him with a fork repeatedly, and gives him “gummy bears,” where she puts parts of his body into her toothless mouth (ewwww). Although Butters’ grandma puts him through hell throughout the entire episode, the most satisfying part was Butters actually standing up to her and calling her out for the dark and empty person that she truly is. This episode took a surprising turn, but it still showed Butters suffering in a hilariously twisted way that only South Park can pull off.

3. Being Tricked Into Believing that the World Has Ended and Overrun by Cannibals (Casa Bonita)

Any South Park fan should know that Butters is basically Cartman’s punching bag. They should also know that Cartman will do anything to get what he wants, even if it includes deceiving Butters into believing that the world has ended. In order to replace Butters for a trip to Casa Bonita, Cartman convinces Butters that a meteor is about to hit Earth. The always gullible Butters buy’s into this and allows Cartman to trap him into a bomb shelter. When a search party is being sent out to find Butters, Cartman convinces him that the meteor destroyed the Earth and the radiation turned everyone into cannibals (classic Cartman). When Butters frees himself from an abandoned refrigerator Cartman locked him in, he finds himself in the middle of a garbage dump, believing that’s what’s left of South Park. When a garbage lady reveals that the town and everyone in it is perfectly safe, Butters exposes Cartman’s scheme, but that doesn’t stop Cartman from having a good time at Casa Bonita. This episode shows the gullibility of Butters at its peak, making it his most defining character trait, which we all still love him for.

2. Getting a Ninja Star Thrown into His Eye (Good Times with Weapons)

When Butters created his alter ego, Professor Chaos, he did so with the intent of becoming a more confident and tougher child. However, this alter ego didn’t do him any favors when he went up against Stan, Kyle, Cartman, and Kenny while they were playing ninja with actual ninja weapons. In the heat of the very imaginative battle, Kenny throws a ninja star into his left eye. Fearing for what punishment they will face for playing with weapons instead of worrying about Butters’ life, the boys concoct another ridiculously absurd plan to dress Butters up as a dog and take him to a veterinarian. Butters spends the rest of the episode on the brink of death, dressed as a dog (very poorly), and even gets urinated and defecated on by other dogs. While Butters eventually gets his wound treated, the amount of abuse he goes through during this episode is insane, but hey, it still made us laugh. Let’s fighting love!

1. His Mother tries to Kill Him (Butters’ Very Own Episode)

Linda and Chris Stotch, the parents of Butters, aren’t exactly winning any mother and father of the year awards anytime soon. They are probably the worst parents in South Park and Butters’ Very Own Episode (the actual title) proves it. When Butters discovers that his father indulges in homosexual activities (although he is too naÃ¯ve to understand the true nature of it), he takes photos and shows them to his mother, indirectly causing her to have a mental breakdown. She then tries to kill him by dumping her car in a river while he’s inside it, and when she confesses what she has done to Chris, they both lie to the press about it by saying Butters was kidnapped by “some Puerto Rican guy.” While Butters eventually finds his way home, he remains completely oblivious to his mother’s attempted murder of him and his parents even try to convince him to lie about where he’s been. When Butters tells them that telling the truth is the right thing to do, Chris and Linda reveal everything to the press, even the attempt on Butters’ life. This revelation horrifies Butters, while Stan, Kyle, and Cartman upbraid him for his psychotic parents and inform him that they will rip on him for it. Butters learns that lying can actually be for the best and proceeds to go on with his life as if nothing ever happened. No wonder this poor kid has so much anxiety.

There you go, South Park fans, those are the five worst things that happened to our favorite dweeb, Butters. There were many to choose from, but these were the worst of the worst. Butters may forever be the punching bag of the show, but that’s exactly what we love about him. He is a dweeb, but he’s our dweeb. Gee whiz, fellas.