Home
The Flash
The Flash Season 3 Episode 16: “Into the Speed Force” 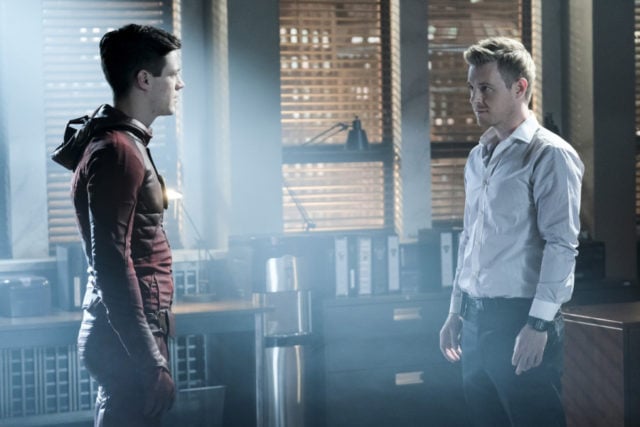 The Flash has always been a show that falls back and forth on what it wants to accomplish and quite often feels like it’s retreading on a lot of former plots. Season 3, while a little shaky to start, has actually shown some nice development and really rounded out the Flashpoint story in a unique way. Yet, just when the show feels like it’s getting somewhere or presents interesting concepts, it can completely destroy things in one swift move. The threat of Savitar has been looming for awhile now, and Barry is doing everything in his power to stop it, but the character just continues to display a lack of growth that begins to get frustrating.

“Into the Speed Force” presents a really fun concept by having Barry re-enter the mysterious landscape where pretty much everything can happen. It’s something that the show has briefly explored for an episode before, but is a great setting to address any topic and really allow Barry to try and learn more about his powers and the forces behind them. The Speed Force adds a really unique layer toÂ The Flash because unlike other heroes, there is a supernatural force involved with speedsters. This episode has a lot of fun with that idea and sends Barry onÂ A Christmas Carol type journey to confront people from his past who have sacrificed their lives for the greater good, but as a result of Barry’s mistakes.

It’s great to see the familiar faces of Eddie, Ronnie and Snart show back up onÂ The Flash, but the characters represent a whole lot more. It was surprising to see the episode open right with Eddie, but he is the clearest example of someone dying because of events Barry was caught up in. While there is no way Barry could have ever predicted Thawne would come for him from the future like that, it was something that the character would have never been involved with if it weren’t for Barry. All of these people have sacrificed their lives yet Barry has continued to get everything he has wanted in life. The Speed Force feels they really have to teach him a lesson about trying to make things perfect, which is something that has been long-needed.

While all of the past returning characters would most definitely sacrifice themselves again, the point is that Barry has not yet reached a point of selflessness where he would do the same. Even in last week’s episode, “The Wrath of Savitar,”Â Barry sits and watches as Wally gets sucked into the Speed Force, screaming for Barry’s help. The character has so many great characteristics, but he hasn’t grown into a full leadership role yet, which is what this season has been about.Â The Flash presents a really fun-loving and caring character, but Barry’s biggest flaw is his selfish nature that dominates his personality at times.

The Flash has been putting together some really nice episodes lately, and it’s been important to teach Barry such a serious lesson in order for him to develop as a hero. What’s funny is that even in “Into the Speed Force,” Barry has zero intention to take Wally’s place. The character just assumes he will find some way to break the rules, which on one hand is admirable and displays the character’s strong belief in himself; however, it also just reemphasizes how naive of a person Barry is and how much growing he still has left to do. It was fun seeing so many speedsters in the episode, but Jay’s inclusion at the end was one of the best moments because of the meaning behind it. Jay’s belief in Barry is very enjoyable because it feels like he knows Barry will become a great hero, but Jay helps Barry get there by being a role model who makes the necessary sacrifices for the betterment of the future.

Everything about this episode was really great, until the final moments. The journey Barry gets sent on is very important and has a lot of meaning but, yet again, in one swift writing decision,Â The Flash manages to almost ruin an episode. Barry spent the previous week trying toÂ outsmart the future by proposing to Iris, thinking it will change things enough to save her. Despite Iris telling Barry that he has now tainted their relationship by selfishly using their proposal as a tool in his fight with Savitar, the titular hero decides he will try the opposite and break up with the love of his life. It’s sad because while Barry is definitely a smarter character than this,Â The Flash is suffering from clear (INSERT CHEAP CW DRAMA HERE) writing. It really spoils what was a solid episode and makes Barry look less intelligent than he truly is.

“Into the Speed Force,” does a nice job of continuing to present Barry with all of his flaws and everything that has happened as a result of him becoming the Flash since the show’s inception. The character is facing his toughest challenge yet, but there should be no sympathy for Barry because he created all of this at the beginning of season 3 out of pure emotion. Being a superhero comes with great responsibility and a huge weight to carry, but having the ability to rationally restrain oneself from selfishly using their powers for personal gain is what separates a hero from a villain. With Iris’ death right on the horizon, hopefully Barry can stop messing around and start rationally trying to fix the problem instead of doing stupid things like trying to propose or dump Iris, thinking it changes his feelings.

– I think Cisco is the best part of this episode.

– I appreciate that HR continues to prove his worth. It’s nice to have a character who manages to stay focused on the threat of Savitar when everyone else is getting caught up in drama. Now we officially know the character is wearing armor (not that it was unclear to viewers, but it’s confirmed).