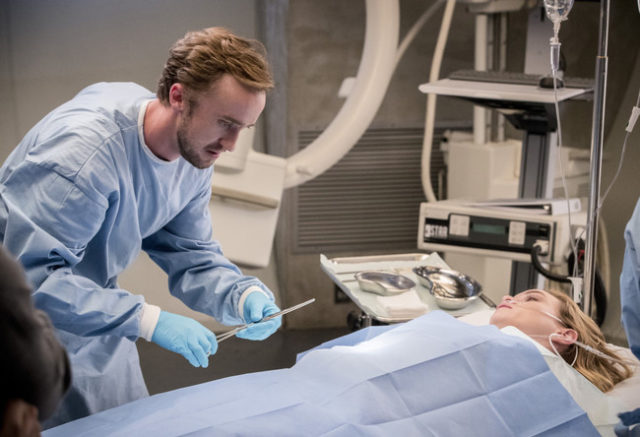 Come March, all of the CW DC shows, including The Flash,Â Â start to hit their final stride and really begin to raise the stakes with only a few episodes left to finish off the season. However, with that usually comes some epic episode or reveal that changes the game and is the make or break moment for a villain reveal or plot twist. BothÂ Arrow (which even still has an episode left) andÂ Supergirl are great examples of this and have given fans plenty of thought provoking content to hold them over and keep the show fresh as it takes a break from the air.Â The Flash, however, has been relatively quiet about Savitar more recently and continues to leave viewers guessing about the epic sounding origin for the God of Speed.

Last night’s episode, “Abra Kadabra,” takes the show into it’s break until April 25th, and introduces the titular new villain who comes from the future. Abra Kadabra is a massively fun villain to incorporate into the show because he extends the amount of future and other dimensional beings with powers that feel unusual compared to whatÂ The Flash has given to viewers thus far. While the character is only attempting an escape mission to return to his own time, the villain shows that his future knowledge is one way he can really torment team Flash. Savitar has been a looming threat all season long, but for the most part it’s been all talk, which has both a good and bad impact on the show.

On one hand, the threat of Savitar and knowledge of Iris’ death, has been breaking down Team Flash left and right, which was shown once again last night when Joe chose to let Abra Kadabra free.Â The Flash is tackling the idea of living in blissful ignorance over horrifying truth pretty well so far, and it definitely has brought a nice lesson to the table for Barry and everyone else involved that will be a game changer in the character’s growth into becoming a better hero. Barry has been pretty carelessly running around and changing time since the show’s first season, but as mentioned before, it’s all about the character’s origin story and growth into a great hero. These are some necessary lessons for Barry to learn and Savitar is going to teach them, even if it comes in a the harshest way possible. However, at the same time,Â The Flash has suffered from building up villain reveals that end up feeling boring with lackluster finales. For how much Savitar is being built up, and the longer his identity remains a secret,Â The Flash writers better have something legitimately fresh and exciting planned for the show’s return.

What season 3 ofÂ The Flash has nailed though, is the development of it’s side characters. Cisco has started his pathway to becoming Vibe, and even with some frustrating back and forth, his character has returned to natural form and been given some nice steady growth so far. Bringing Gypsy into the show has been a lot of fun, especially because it has also opened up access to new villains like Abra Kadabra, as seen last night. While Caitlin’s transformation into Killer Frost has been pretty predictable and a little back and forth, it at least is a fresh story for her character to have and feels like she is being given more to do. It will be interesting to see how the show moves forward with Killer Frost, because Caitlin is too great of a character to lose on a full-time basis, but at the same time, it would be very bold forÂ The Flash to strike such a blow to Team Flash (and the viewers).

“Abra Kadabra” continues to throw the characters on the show out of their comfort zone and push them to do irrational things. Last night, in an unusual fashion, Joe was the one to selfishly try and save his daughter’s life in exchange for freeing a criminal. Despite being out of left field, this is where the Savitar’s threat actually does a nice job in showing just how far a single unexpected idea or event can push these characters to their limits. Joe has always been a relatively pure character who, being on the police force, knows that upholding the law should come before personal benefit. Yet, the knowledge that he will lose one of his children pushes him to forego logic and act on emotion. This seems to fully prove how much of a nightmare Savitar has become, because not only has he gotten to the younger immature characters, but he is even starting to get under the skin of one ofÂ The Flash‘s wiser and more controlled characters.

The Flash has been really back and forth throughout it’s third season, but overall has been building up to teach Barry, and Team Flash, a good lesson about thinking before they act. In this origin story, Barry has easily overcome the villains by outsmarting them while not really caring about how his powers work or the repercussions that could come from thinking he can do whatever he wants with them. Once again,Â The Flash has built up a villain and the massive threat that comes with it, but continues to hold the cards close to the chest with only a few episodes left. While Savitar seems like a more complicated villain compared to last season’s Zoom, the show is taking a bold step by not revealing anything yet. Great villains aren’t made by a revealing twist, but by how that twist completely messes with each character’s trust and psychological state, and hopefullyÂ The Flash can deliver that with enough time to provide a satisfying finish to the season.

– I love how much Gypsy is recurring so far and having her team up with Cisco. I really buy into the theory that Earth 19 Cisco was her partner who was killed.

– Honestly I am super bummed thatÂ The Flash didn’t give us a Savitar reveal in this episode. If handled correctly it would have been the perfect reveal to deliver to fans before the hiatus.

– So I guess The Thinker is going be our big bad for next season? Abra Kadabra dropped his name in the list of “The Flash’s greatest foes.” I hope that he organizes a really epic Rogues team and is the mastermind behind them all.

– Glad they got Tom Cavanagh that episode credit…