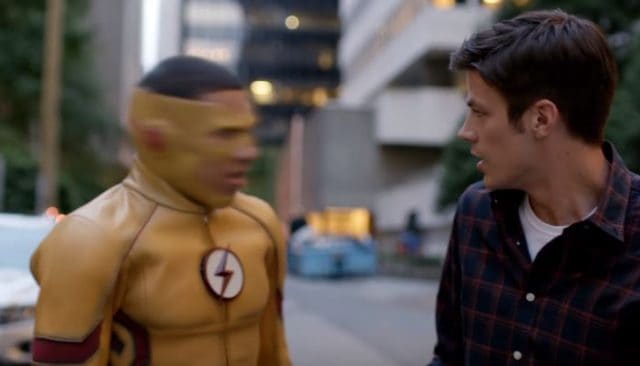 The Flash Season 3 finally kicks off tonight with its premiere, “Flashpoint,” and there’s still a lot that we don’t know about the new reality that Barry has created. However, one thing that has been clear since the very first trailer for the CW series’ third season is that there’s a new Flash in town, and his name is Wally West.

In the scene below from tonight’s premiere, Barry has his first encounter with Wally, aka Kid Flash, as Central City’s new hero faces off against The Rival. How does Barry respond to being a spectator to the event instead being the superhero at the center of it? Watch the sneak peek for yourself to find out.

As mentioned above, The Flash Season 3 begins tonight at 8 p.m. on The CW. Check out the clip from “Flashpoint” below, along with The CW’s official description of the episode.

WHAT WOULD YOU SACRIFICE TO HAVE EVERYTHING YOU’VE EVER WANTED? — Barry (Grant Gustin) is living his dream life — his parents are alive, he’s asked Iris West (Candice Patton) on a date and he can finally be a normal guy as Central City has another speedster, Kid Flash (Keiynan Lonsdale), running around saving the city. When Barry starts forgetting parts of his old life, the Reverse Flash (guest star Matt Letscher) taunts his nemesis and tells him that there will be serious repercussions for Barry and the ones he loves if he continues to live in this alternate universe. In addition to losing his memories, his powers will also start to fade. When disaster strikes, Barry must decide if he wants to continue to live in this world as Barry Allen or return to his universe as The Flash. Jesse Warn directed the episode with story by Greg Berlanti & Andrew Kreisberg and teleplay by Brooke Roberts.