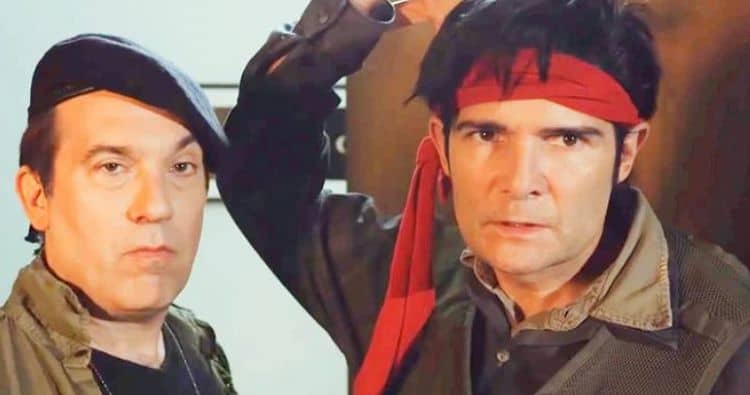 Hands up, who saw the last two Lost Boys movies, The Tribe and The Thirst? If you’re one of the few, yes my hand is raised, then you’ll know that the Frog brothers, Edgar and Alan, did eventually come back to run The Thirst after Corey Feldman was basically a cameo character in The Tribe. The end credits of The Tribe did feature Corey Haim as a vampiric Sam from the first movie, with the implication being that Edgar finally dealt with him after a story that many people likely don’t know the history of. But it would appear that the Frog brothers are going to be featured in a free YouTube video that will coincide with Halloween and will bring Feldman and his old buddy Jamison Newlander, aka Alan Frog, back to help enjoy this Halloween season since many places across the nation will be shut down and unable to provide the same kind of entertainment that this time of the year is known for. It’s regrettable to be certain since this time of year is always a lot of fun for kids and adults alike, but with the pandemic still going it’s not likely that a lot of places are going to be in business, and those that are might be getting an earful for operating during such a time.

There aren’t a lot of details at this point about what the Frog brothers will be up to in this presentation, but the rumor is that they’ve expanded their repertoire to ghosts, and if there’s any indication of this being true, then maybe they’ll take after the last movie, The Thirst, and include werewolves as well since the implication was that there were werewolves in Edgar and Alan’s world as well. Hey, they dealt with vampires, so why in the world couldn’t their world be hiding even more secrets? If you’re laughing or at least chuckling then you’ll likely know just what might be coming, or at least have an idea since it’s the Frog brothers, two of the most unlikely individuals to survive a horror movie out of anyone that’s ever been in a horror movie. They might be prepared and they might be well-versed at this point, but if anyone remembers how they started out it was kind of hilarious since they forgot so many things that it made a person wonder just which comics they’d been reading. It might have also made sense to think that anyone reading legends about any type of legendary beast or creature might be killed outright before figuring out that half of the legends and rules regarding spooks and creatures of the night are likely to be a lot of nonsense, especially considering that if they were real, most people simply couldn’t handle the thought.

The idea is that the legends and myths that we hold onto had some basis in reality, no matter how mundane or hard to explain some of those legends might be. But in Edgar and Alan’s world, since vampires are real, and they’ve likely figured out that some of the preconceptions they had weren’t realistic, it’s also hard to imagine why they haven’t been doing everything they can to stay on the down-low and keep the bloodsuckers from finding out who and where they were. Of course, it could be that the vampires didn’t care since they didn’t figure the Frog brothers were worth that much attention. To be real, they don’t pose much of a threat to smart, powerful vampires that would tear them limb from limb. And when you look at it, the vampires that the Frog brothers have gone after have been kind of arrogant, foolish, and a little too full of themselves to really see a threat when it was staring them in the face. Underestimating a Frog brother is a bad idea obviously, but taking them seriously would be their downfall without fail since if the vampires they’d been fighting were written in as anything but vain party boys they would have been handled quite easily.

But that’s one of the main points of the Lost Boys movies, the vampires weren’t really that intelligent, and they weren’t cunning enough to do much more than feed off of people that might as well have been wearing numbers denoting the order in which they would be killed. The idea that the Lost Boys has been pushed towards the small screen is still an idea that’s being pursued, but with the failure of the last unfinished pilot, and the idea that the Frog brothers would become the Frog sisters, it’s likely that people are going to give this a definitive ‘no’ until it can really wow someone. Personally, my thought is that the Lost Boys should have been left alone as a one and done kind of movie.