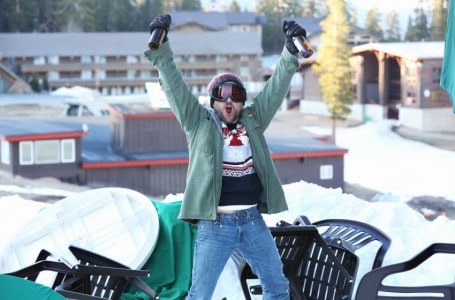 It’s Always Sunny in Philadelphia is good at a lot of things, but one thing it really excels at is spoofs. Whether they’re making their own Lethal Weapon or not-so-subtly making fun of all the mainstream shows that win awards, this show knows how to make a good spoof. This week they took on spoofing bad 80s ski movies, making sure to include all the tropes that make these movies so disastrously hilarious. And of course, this show always has to put their own spin on things that take their episodes from funny to exceptional. They did so again last night, and while some of the humor was a little too over-the-top for my tastes, there were still plenty of laughs in this highly entertaining episode.

From the start, the premise of the episode was set up around the notion that the mountain is magical and things that normally wouldn’t happen to you, will happen on the mountain. All of a sudden the gang, who rarely ever leave Philadelphia, were master skiers, able to do flips and jumps that most pros might struggle with. But that’s just the power of the mountain, where even Charlie could make it down one of the most difficult courses on his first try without even using ski poles. A good spoof is nothing without ramped up unbelievability and that notion followed the gang throughout the episode.

One of the best gags of the episode came from the fact that Charlie was the only one who realized how ridiculous everything was. Having never been to the mountain before, he didn’t understand its power and questioned every coincidence along the way. When Frank challenged his old rival to a race, having Dennis take his place, and Dennis ended up with a team of Swedish racers, Charlie questioned it. And when the announcer at the ski resort seemed to be only focusing on the gang and their adventures, Charlie couldn’t understand why. Of course, all of this was just making fun of how contrived and unbelievable everything in the terrible 80s ski movies are, and it was brilliant to have Charlie there as the voice of reason, pointing out all the coincidences that the audience obviously also noticed.

Keeping in line with their goal of making fun of 80s ski movies, Charlie also had to choose in this episode who he was going to spend the two days with. On one hand, he could go with Mac and Dee, whose only goal was to party and have fun, a classic plot in these movies. His other choice was to go with Frank and Dennis, whose goal was to buy the mountain and essentially turn it into a resort where businessmen could go to cheat on their wives, another classic plot (minus their reasoning for wanting to buy the mountain). Again, the show acknowledged how dumb this all was when Frank and Dennis encouraged Charlie to join them and Mac and Dee’s only response was that they didn’t care who he went with, it was only two days. The stakes always seem so high in all the movies and It’s Always Sunny made sure we knew just how low the stakes really were in their episode.

No good ski spoof would be complete without a big race to determine who got to keep the mountain but of course, things don’t always go according to plan. Frank’s rival got arrested for inappropriate behavior and had to forfeit, leaving Charlie to save the day. It’s important to note that Charlie had spent the night before with a model, having a lot of crazy sex, as is opt to happen in ski movies. He finally saw the magic of the mountain, where someone like him could sleep with a model, and was ready to take the place of Frank’s rival to save the mountain. A freak injury for Dennis caused him to almost lose the race to a much slower Charlie, but he crawled his way to the finish line to claim victory because Dennis is nothing if not competitive.
The real genius of the episode wasn’t revealed until the end though, when Frank announced that he never actually wanted to buy the mountain. Instead, he had set everything up, including the strippers and everything else the gang had deemed ‘the magic’ of the mountain, in a plan to distract everyone while he exploited the mountain for its natural resources. The whole point they were trying to make in this episode is that nothing can actually be that contrived without there being a reason behind it. In an episode full of ridiculousness, It’s Always Sunny continued their streak of making amazing spoofs.