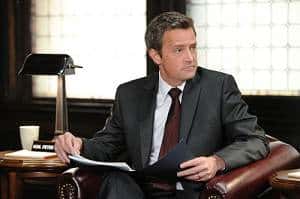 This week’s episode of The Good Wife saw Alicia securing herself a bonus and managing to pull a switcheroo on Louis Canning (guest star Michael J. Fox). After Canning got involved in a lawsuit involving a Lockhart Gardner client suing a snowmobile manufacturer, he once again offered Alicia a position. Desperate to secure more money so that she could afford to buy her old house, she approached Diane about the offer, asking if the firm could match it. While some of the other partners didn’t want to single Alicia out for a raise, Diane used her managing partner authority to grant Alicia a bonus. Also, she and Kalinda have somewhat reconciled, with the understanding that their relationship cannot be what it once was, but needs to involve a rebuilding of trust.

Matthew Perry will be making a guest appearance in the March 25 episode of The Good Wife. In the episode, Alicia is assigned to work on a blue ribbon panel, which is investigating a police shooting. But some suspicious actions lead her to question the motivations behind the panel chairman’s actions. Matthew Perry guest stars as Mike Kresteva, the panel chairman. Meanwhile, Kalinda’s business interests receive some attention from the IRS.

Watch a preview below for the March 25 episode of The Good Wife.Â 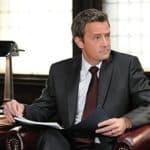 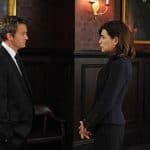