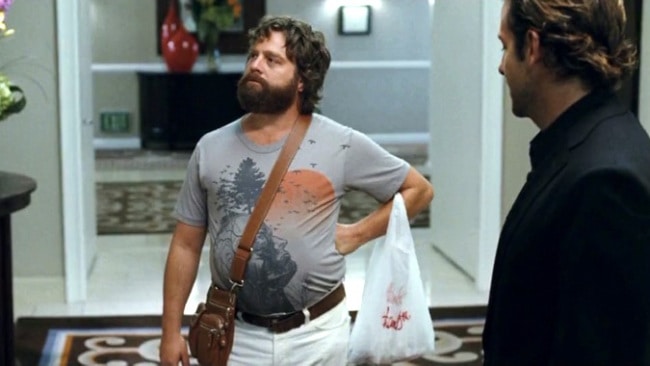 These days blowing a sponsorship with a company like Nike is still considered to be pretty stupid and rather costly, but it can still be a huge stab at taking a stand for human rights, at least in the minds of some folks. Apparently famed comedian Zach Galifinakis was approached by representatives of Nike after his stint in The Hangover and offered a deal that he torpedoed with a single question. The idea that Nike has been using child labor for so long isn’t much of a secret any longer, and whether or not it’s true is something that many people will continue to argue over for years to come no doubt. But Zach wasn’t going to let the moment go as he asked if Nike’s shoes were still being made by children, which was obviously something that the company wasn’t going to let pass and came with the rescinding of the offer. It doesn’t feel as though Zach was too hurt by this act, both emotionally and financially, since his career was on the rise, and one less sponsorship didn’t appear to bother him considering that he was still in high demand at the time. As far as now goes he’s still a well-respected comedian and actor, but it does feel a though his reputation has dimmed just a bit, or maybe it’s matured and he’s not quite the same individual he started out as.

One might think that it’s the height of stupidity for anyone to say no to a company such as Nike, but it’s important to remember that as much as a company such as Nike can bring to a person’s career, it’s also important to recall that for all their talk of diversity and supporting people around the world that are underprivileged, Nike was found to be running sweatshops back in the 90s. It’s kind of uncertain whether this practice is still in effect since Nike has likely become far better at covering up anything they don’t want people to see at this time. But it does sound as though the company has been trying to clean up its act. This usually isn’t enough for many people though since they’ll still remember the 90s, and forgiveness is a long path that has no definite end when it comes to many people. Today Nike is still in use around the world and they’re still a top brand, but the scrutiny has increased quite a bit since getting away with anything almost feels like it’s impossible, though with as many eyes on the company at the moment as there are, it’s still possible to miss something.

It does feel that those that allow themselves to be sponsored by Nike might be hypocrites when saying that they stand for something, especially if Nike still employs sweatshops, but it’s for each person to decide no matter how questionable this might be. A lot of people claim to have done their research as they accept or deny any involvement with the company. A lot of people might have thought that former NFL quarterback Colin Kaepernick, who claimed to have been blacklisted from returning to the game, accepting Nike’s money was being hypocritical in a big way. After all, the act of kneeling on the field in protest of the national anthem was said to be against police brutality and the woes of its influence in America. But to think that someone might have a problem with police brutality, which is a huge issue, but not child labor and sweatshops is more than a little confusing. Apparently this issue has been brought up and is being addressed, but until it’s certain that Nike is no longer in the business of employing those that it will work to death in sweatshops it’s likely that a lot of people might steer clear of the company, even as some continue to accept the products that are offered without thinking that anything is terribly wrong. Zach obviously wanted to stay away from a company that didn’t feel that it was morally bankrupt for employing children and allowing their people to work in some of the most unsafe conditions. Either it wasn’t good for his reputation or he truly cares about the issue or both. It’s hard to say really, but he absolutely denied Nike any hold over his life at that point. It might have been worth it just to be there to see the look on the representative’s face.

Seriously, some companies don’t like being told no, even though it happens on occasion and there’s not a lot they can do about it. Zach said what he had to say and honestly Nike didn’t care to hear it so they went on to the next individual that they could possibly sway to their side.