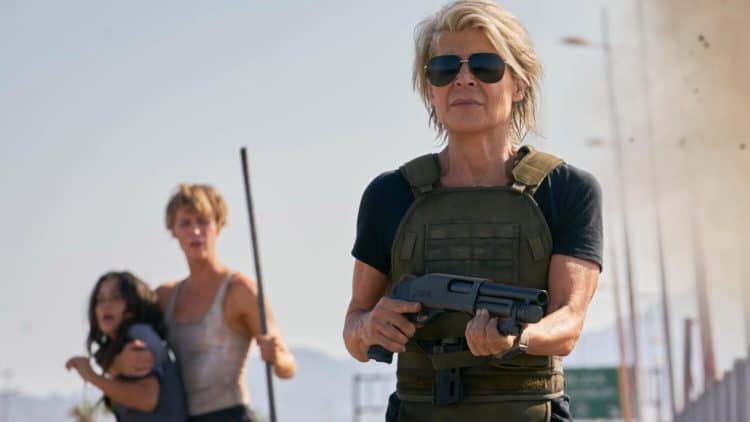 It almost feels like punching down now when thinking of Terminator: Dark Fate, doesn’t it? Oh well, the point is that the movie kind of brought this on itself since it was just that ridiculous. With all the fancy footwork that was being done to explain time travel and the many things that shouldn’t be possible but were possible because they were made possible before they were possible even when…then…oh hell let’s just admit that the writers tied themselves in knots and said ‘let’s add more explosions and future stuff and hope people don’t figure it out’. Seriously, the amount of thought put into this movie makes it feel as though those doing the writing and directing were thinking of how awesome it would be and how much money they could make and forgot that they actually had to put something into the story in order to make it work. At that point they must have then gone back and slapped a few elements from the Terminator franchise into the movie and added in a few new elements they figured would be accepted by the fans since there was no need to say sorry in any way for the horrible way the story had been bungled at that point. Because of that, we were left with a rehashed and reheated version of a classic movie franchise that should have ended with the second movie and the cliffhanger that would determine whether Judgment Day would still happen or not.

It’s not even just the lackluster story that killed this movie off, it’s the fact that they looked to feminism for their ideal storyline since Mackenzie Davis’ whole attitude, switching out John Connor for an unknown savior, and bringing back a crusty, bitter version of Sarah Connor made it feel as though the whole ‘I am woman, hear me roar’ vibe was meant to inspire the fans, when all it did was irritate a lot of people since had they gone about turning this part of the story into something that was a little more natural and not quite as forced it could have been interesting at the very worst. But turning Grace into a badass wasn’t a bad idea, it was showing that she had a serious disdain and disregard for men that kind of rubbed some people the wrong way. She’s tough, she’s irritable, and she has massive trust issues, got it. But seriously, she’s coming back in time to save the leader of the human race that exists in her own time, a time when Skynet no longer exists, and a force known as Legion takes over. Does anyone get the feeling that Legion might have been a secondary program that might not have existed or might have been subordinate to Skynet if the timeline had been preserved? In any case, there are still terminators under Legion’s rule since…reasons, and now humans are being augmented as well to combat the terminators, but they’re way more limited since being human they can still overheat quicker, they need to eat, and they need to hydrate. In other words, the whole human experiment might have upsides, but against a machine that will keep going until its scrap, an augmented human is still a less than reliable weapon.

This story was bound to suffer from the start since it took off on a premise that Judgment Day had been stopped when in truth had this happened the terminator wouldn’t have been able to come back and target John. Skynet wouldn’t have existed, but even if Legion did, then the point of sending a terminator back to the far past to eliminate the start of John’s family would have been the smarter bet. Pull the root instead of going after branches after all, as a machine might actually deduce at some point. Even better is the fact that people centuries back wouldn’t have anything even remotely useful to use against a Terminator unless one of them managed to line up a cannon and use it effectively. If the newest Terminator or even a T-1000 was sent though, it’d be game over pretty quickly. There are so many plot holes in this movie that one could drive a fleet of semi-trucks through them and still have room to spare for further explanation as to why this movie didn’t work. To be honest, there were a few decent action scenes and some of the effects were pretty cool, but otherwise, it was a mess, and talking about it like this isn’t really that big of a deal since it’s one of the worst movies of the decade.

What was meant to revive the Terminator franchise is likely to kill it off for good unless someone can come in and show enough intelligence and ambition to make it work once again.