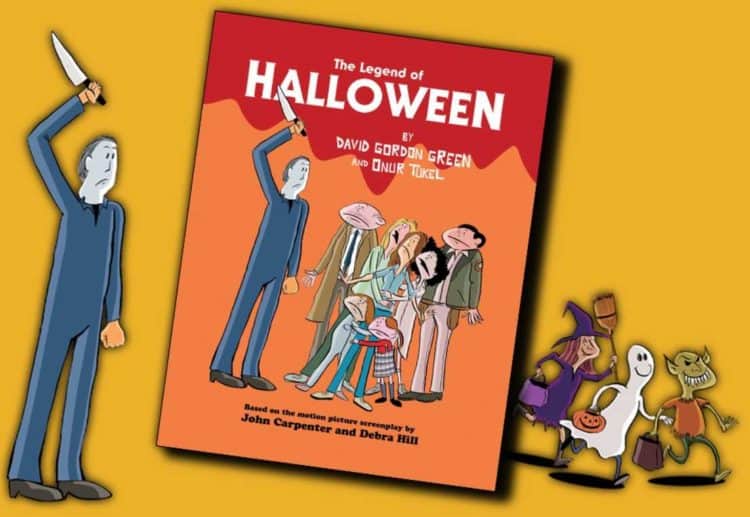 Does anyone remember when Die Hard was turned into something like this? It didn’t really take off then either, but for some reason, this feels like it might since Halloween is a movie that a lot of us probably wanted to watch when we were younger simply because an older sibling or their friends or someone we heard in school said it was awesome. Of course when you’re a kid doing or watching anything that makes you feel a little more grown-up is going to sound pretty cool, but this almost borders on disturbing in a way that’s hard to stomach. But before your guts tighten too hard it’s wise to think about what kind of material is pushed to kids these days between books, comics, movies, TV, and video games, and consider that it’s not likely to be that bad as far as the content goes. One thing that anyone should be able to realize is that it’s not glorifying killers, it’s not stating that Halloween is something kids should aspire to, and it’s not getting down to the same details that the movie went into, at least one would hope not. It does feel that some folks might blow this out of proportion and take the idea as something to be an effort to ‘corrupt’ the youth and get them hooked on horror from a young age.

Halloween fans, a new illustrated story #TheLegendOfHalloween, based on the orig. film, is here! The tale is co-written by dir. David Gordon Green & Onur Turkel, who serves as illustrator. Malek Akkad & Ryan Freimann will oversee production.

This is when a person wonders if anyone has ever read Grimm’s Fairy Tales and has perhaps forgotten what kind of stories were told to children way back in the day in order to keep kids compliant and get them to listen to a single thing that adults were talking about. Halloween is actually on par with some of the stories, but some of them, if retold in this current era, would go beyond grim and get downright disturbing since the new horror stories don’t really have much on the old tales and fables that people used to tell around campfires. Halloween is scary, there’s no doubt, but stripped down to a very basic level it’s bound to be something that kids might actually find spooky, but kind of enjoyable. Now, if people start finding a reason to sympathize with Michael and his decision to go on a killing rampage, it’s likely that there’s another issue at hand that needs to be discussed and will likely be best kept behind closed doors where parents can speak to their kids or their therapists. Michael Myers is after all one of the more disturbing movie monsters that have ever been created since he just doesn’t stop, and he doesn’t give a lot of reason behind why he’s on a killing spree. The only thing that’s obvious is that whoever he targets, well, most of them, are going to die since they’ll continue to follow the standard horror movie playbook, which is to either run and trip over nothing or try to fight back only to realize that the bad guy is insanely strong, tough, and can shove pretty much any solid object right through a human body and possible whatever is behind them.

Reducing this villain down to a kids’ book is kind of an odd move since decades ago this would have been seen as a bit of an abomination and might have been refused by a lot of book stores. But as of now, it’s something that a lot of people are bound to look and shrug off. It’s another piece of literature obviously, something that won’t hurt anyone and doesn’t need to be censored any further than it probably already has since there’s no need to worry too much about how graphic this book might get since as a kids’ book it’s not going to be as blood and guts as it possibly could be. Plus, does anyone remember that Halloween isn’t that gory in comparison to many other movies? It might be one of the scariest movies to ever be made, but it’s definitely light on the gore since it doesn’t go into nearly as much detail as other movies. Some stories use buckets and buckets of red to give the idea that people are witnessing the remains of a charnel house, but Halloween was pretty conservative with it, and a kids’ book isn’t about to go that far.

So really, if there’s anyone that’s about to get up in arms over a book, especially something that’s not about to be seen as harmful, it’s bound to be the hangup of the person complaining that matters more than anything since when looking at this thing at first it did feel a little suspect, but after thinking about it, the book could be an interesting idea. It’s not bound to be an easy sell to some folks, but to horror fans, it might be kind of interesting.