Home
Review
The Lesson of Taken Season 2 Episode 2: Ignoring the Past is not Helpful 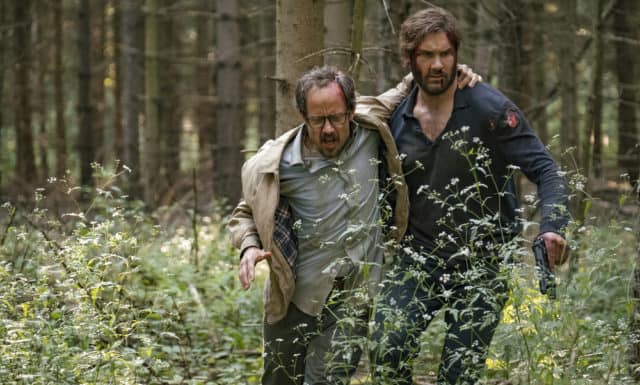 About five minutes into Taken season 2 episode 2 – “Quarry” – there’s a real, “you’ve got to be kidding me” moment.Â  As the story progresses, the irony just continues to mount.Â  Although the action sequences are solid, the overall message is that running from your past in order to protect those you love never works. Meanwhile, in his zest for the show’s new direction,Â  showrunnerÂ Greg PlagemanÂ has done exactly that with the character of Bryan Mills (Clive Standen).Â  It’s too bad, because it undermines the entire effort.

Everything But the Girl: The Problem WithÂ Taken Season 2 Episode 2

There’s this idea in television that it’s fine to ignore romantic relationships with impunity. It’s rarely works out that way. (Just ask the producers of Castle or Sleepy Hollow) but the myth persists.Â  It’s an idea tied up in the sexism of Hollywood, as it’s nearly always the female character that gets axed.Â  Just last fall The Washington Post ran an article entitled, “‘Disposable’ women? TV wives keep dying on shows centered on male actors.”

TakenÂ season 2 has a variation on the Washington Post’s theme.Â  In this case it’s not the wife but the girlfriend who’s disposable. In the revamping of the show the role of Asha Flynn (Brooklyn Sudano) -Bryan’s girlfriend – doesn’t even get the curtsy of being declared dead.Â  Â Despite the sizable amount of story line she was involved in for season one, we’ve yet to hear a word about her fate.Â  Â Even Bryan’s team members got an explanation as to why they’re no longer on the show!

What’s sad is this attempt to erase Asha is is so unnecessary.Â  If the new direction is about focusing more on Bryan and possibly his relationship with bossÂ Christina Hart (Jennifer Beals) the show had the perfect out.Â  Tell the audience Asha died and have it be part of the emotional burden Bryan carries.Â  That, would be believable and add to his hesitations in connecting to people.

Instead, the show acts like Asha never existed.Â  It’s absurd given the extensive part she played in Bryan’s life.Â  Furthermore, it undermines one of the new story lines they’re attempting to set up.Â  They are clearly trying tighten the connection between Christina and Bryan.Â  Apparently they didn’t want any past relationships muddying the waters.

That, “You’ve Got to be Kidding Me” Moment

Early on in Taken season 2 episode 2 Christina takes Bryan aside to talk about how he’s adjusting to his tramatic experience.Â  His response is this.

Well, it’s my folks. I haven’t told them I’m back yet.(…) They’ve been through so much this year, my sister. I just didn’t want them worrying about me.

To be clear, Asha’s role was written to be like family.Â  She’s the dead sister’s best friend and the families – Asha and Callie’s – were close before Bryan ever got involved with her.Â  Â Then he did and the connection was even stronger.

This romance wasn’t pitched as a fling or light relationship.Â  Also, Asha and Bryan’s story line was pivotal to how Bryan avenged his sister and ended up in that Mexican prison. Finally, Christina knew all about it.Â  No one’s even mentioning her and what happened in that season finale?

The only way this new tact works is if you didn’t watch Taken season one.Â  If you did, these first two episodes defeat the effortÂ  Plageman made to have a smooth transition to his machine-driven concept.Â  Â It’s too bad, because without this giant elephant in the middle of the plots this could have been a decent episode.

Taken season 2 episode 2 opened withÂ Paul Graham (Alex Draper), a nerdy professor of middle eastern studies, saying goodbye to his family to leave on some kind of business trip.Â  Â Only when he gets into his transport to the airport to we realize somethingÂ  else is going on.Â  We don’t know what he did, but he’s put in handcuffs – but it can’t be good.Â  Â Whatever it is, his family knows nothing about it.Â  this trip is to testify in a federal criminal case.

It turns out that Paul is set to testify in a federal case.Â  Protecting him is the first case for Christina’s new team, because her boss is concerned about an inside job. There’s the obligatory awkward moments of Bryan trying to connect with his two new team members.Â  It goes badly with Kilroy (Adam Goldberg) – who wants no one touching his precious supercomputer.Â  With Santana (Jessica Camacho)Â it goes better – because she’s got less hangups.Â  Bryan gets a kick about the weapons arsenal and other army essentials she’s lovingly putting together in the office.Â  She tells him she doesn’t believe in half measures and hits him with her personal motto.

Go big so you can go home.

Christina lays out the plan.Â  Bryan, undercover, will be replacing one of the marshals on the plane to D.C.. Santana, also undercover, will meet the plane when it lands.Â  They’ll follow the Paul’s detail to the court.Â  All the while Kilroy will be monitoring them via the computer program.

Up to this point it’s all fine – and then Christina takes Bryan aside for that afore-mentioned heart to heart talk about how he’s adjusting.Â  Â It’s so annoying! On the face of it, the parallel of Paul trying to protect his family from his crimes and Bryan wanting to keep distance from his own family to protect them worked well.Â  It’s just the ignoring of Asha is such a big hole in the equation.Â  It breaks the seamlessness of the story connecting season 1 to season 2.

Nevertheless, despite the glaring omission of Asha, Christina’s response to Bryan is spot on correct.

Yep.Â  The idea that Bryan’s parents would every stop thinking about their son is ludicrous on Bryan’s part.Â  Â It’s really more about making it easier for him.Â  Likewise, not mentioning Asha doesn’t make the audience that watched the first season forget about her.Â  I guess the writers thought having to deal with that part of Bryan’s story was too hard. God forbid their be moreÂ  emotional fallout for Bryan beyond his sister’s murder.

How wasÂ Taken season 2 episode 2 for you?Â  Do you like this new characters?Â  Leave your thoughts in the comments section below!

About five minutes into Taken season 2 episode 2 there’s a real, “you’ve got to be kidding me” moment.Â The good news is the procedural part of, “Quarry” works – but this transition from Taken season 1 is still bumpy.