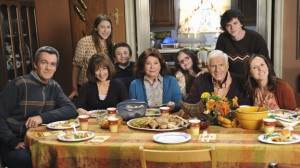 It’s Thanksgiving again and the Hecks managed to survive a dysfunctional gathering with Frankie’s family on this week’s episode of The Middle.

Molly Shannon made a guest appearance as Frankie’s passive aggressive sister, Janet. Her first move was to get to Frankie’s parents’ house first to claim the guest bedroom. She offers it to Frankie when they arrive, but she thought it was best for everyone because her husband needs to work and her daughter Lucy needs a quiet place to sleep. Like every other year, the Hecks get the air mattresses. Janet’s husband, who must be incredibly smart, manages to hide out in the guest bedroom–including during Thanksgiving dinner–until the final scene where he’s standing on the porch with his MacBook, waving goodbye. That’s one way to handle a family gathering. 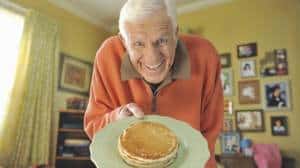 Jerry Van Dyke returned to The Middle as Frankie’s father, Tag Spence. He uses three sticks of butter in every batch of pancakes and takes pills for his liver, foot fungus and blood. That’s what we know. That and he got into a fight with the cable company because they wanted to charge him $4 for HD. Without TV, Mike and Axl escape the Thanksgiving festivities to go to the store every time someone needs something. On the first trip, Axl tries to hit on the cashier by finding ways to tell her that he plays football and is in a band. On the second trip, Mike tries to show Axl that you have to ask a girl questions if you want to make a connection, but he comes across as a pedophile when he asks her if she has to wear Catholic school girl skirts to her Catholic school. On the third trip, Tag comes along and takes his turn talking to the girl, but his conversation about gummy bears and his digestive system doesn’t go over well. I’m guessing Axl still has the best shot in this situation, no matter what he says. After all, he’s the only one of the three who won’t get arrested for flirting. The best line from the cashier: “Just the tiny pink marshmallows, sir?” 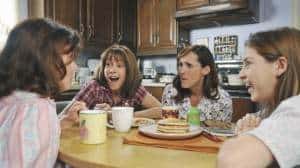 Sue is excited that she’s allowed to sit with her mom, her grandmother and her aunt to listen in on the family gossip. Frankie decided Sue is old enough now, and Sue agrees since she matured on a family camping trip on a recent episode of The Middle. She is now a member of the “blah blah sisterhood.”

With Sue invited to the gossip table, it’s now Brick’s job to play with their little (and whiny) cousin Lucy. After a failed attempt to get her to play librarian, they end up playing Connect Four and Pretty Pretty Princess. Despite his attempts to let her win the games, he ends up decked out in a tiara, necklace and earrings. Poor Brick. Lucy is crying over not winning the game, and Janet tells Frankie that Brick is being competitive. Brick gets no thanks and is forced into building a snowman with Lucy, during which her beloved Mr. Bear goes missing. Lucy freaks out (according to Janet, she’s having an emotional reaction appropriate for the situation) and the whole family–except Janet’s husband–goes out to search for the toy. When Axl finds it, it’s broken, and Brick gets blamed because Lucy says he had Mr. Bear last. Brick refuses to take that kind of accusation, and sets out to perform a crime scene investigation. 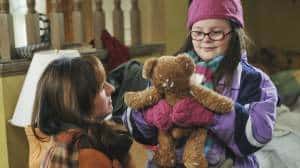 The Mr. Bear situation heats up the tension between Janet and Frankie. Without specifically asking Frankie to buy a new Mr. Bear, she mentions that you can get them at the toy store for $60. The next day, Janet tells Brick not to touch a frame that he appears to be fingerprinting–we will never know how that related to Mr. Bear–and then refers to him as “special” to Frankie. Frankie privately tells her mom about how ridiculous it is that Janet suggested she buy a new Mr. Bear, and Janet privately tells her mom why she thinks Frankie should. They’re all drinking wine by this point. Good idea. 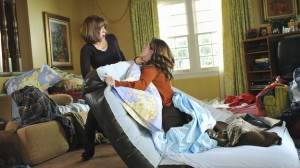 The sibling rivalry comes to a head when Frankie is taking a nap and Janet wakes her up to tell her it’s time for her to make corn. They yell at each other over who is more tired, whose kids are the most work, and how Janet broke Frankie’s plastic hotdog when she was six. Frankie is trying to roll Janet off the air mattress so she can clean up the mess Janet accused her of having, until they realize everyone is watching. They proceed to have the quietest Thanksgiving dinner ever.

After dinner, Brick solves the mystery of who had Mr. Bear last: unfortunately, he found his own footprints closest to where the toy was found. Later, Frankie and Janet apologize to each other, hug it out, cry a bit and make lots of loving sisterly compliments. Frankie is happy with the way the holiday turned out as they pull out of the driveway.