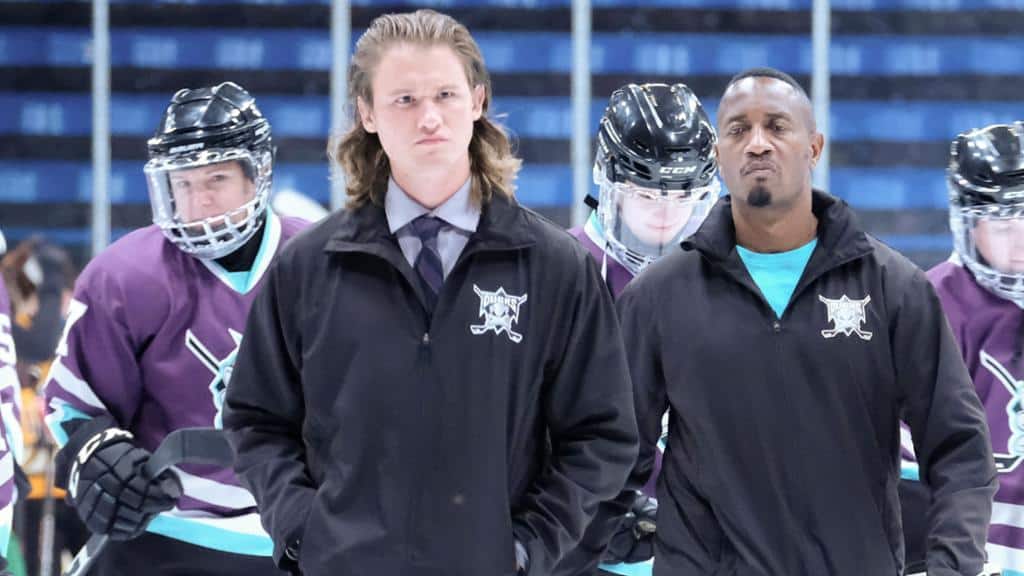 Things are getting slightly better, kind of, sort of, but in ways that are already making it obvious that they’ll continue to get worse before they really start looking up. Gordon Bombay is at least talking to Alex and the Don’t Bothers managed to score a single goal against the Mighty Ducks, which was amazing since the Ducks were slaughtering them and ended up winning 17-1. Obviously that wasn’t good enough for Coach T, who actually chewed his team out following the less than impressive win, stating that the Don’t Bothers shouldn’t have scored even a single goal. That was more than Sofi wanted to hear, and after balking for so long at Evan’s offer to join the Don’t Bothers, and even blaming him for a B+ on a math test after meeting him for pizza and another attempt at getting her to join the team, she finally said yes. Winning in sports is by far and large a great feeling, but there’s more to playing sports than just winning, and many would agree that Coach T has forgotten this in a big way, and so have the Ducks. Unfortunately, Alex, who has obviously not won in a long time in anything, even life, has taken those losses and adopted an attitude of ‘I still matter’ which isn’t a bad attitude to have but doesn’t inspire a lot of confidence when it comes to being competitive.

So far things have been pretty rough on the Don’t Bothers as Evan has to continue to deal with the abuse that’s been heaped on him by his former team, and the rest of the group have had to experience what it’s like to get thoroughly beaten down on the ice. On the upside, Gordon Bombay is starting to talk more and has confided in Alex why he stepped away from hockey, and the removal of the ‘No Hockey’ sign on the wall of The Ice Palace leaves a lot of hope that he might actually think about getting back into the swing of things, but don’t hold your breath just yet. It’s easy to think that eventually, we’ll get to see some of the original Ducks that started everything off, but whether we’ll see them during the next episode or not is hard to say since things are still building a very slow but deliberate way to show the development of the team, of a few individuals, and it’s been made painfully obvious that the Don’t Bothers have a long way to go until they’re good enough to challenge the Ducks. More and more Coach T reminds me of the Iceland coach from the second Ducks movie, while the team is a three-way cross between the Hawks, the Iceland team, and the varsity team from the third movie. In short, the Ducks and their coach are just utterly ruthless and have forgotten how to have fun, as have the parents that are pushing their kids to such limits as to keep them winning and on a positive course towards a life that they might not even want.

On the other end of this series though is Alex, who is doing her best to inspire her team but is so out of her depth that it’s actually painful to watch. But when Bombay wrote a set of instructions in her notebook she didn’t hesitate to use them or to say thank you, which eventually prompted him to open up. As cynical as he’s been playing his character, it’s obvious that he still cares, but he’s hesitant to get back into it since he lost so much to begin with that he doesn’t want to risk losing everything. If Bombay comes back to coach, and that’s a big ‘if’, then it will likely be with the help of the original Ducks. But if he’s there to give Alex a few needed pointers and help her development as a coach and a person it would be nice to see as well since it would indicate that he’s become not unlike Hans in his own way, the guy that sits behind the scenes and helps out when he can through the benefit of his gathered wisdom and knowledge of the sport. One way or another, it does feel as though the Ducks are either going to learn what it’s like to win with grace, or lose and be reminded of what it means to actually enjoy the sport. People might want to argue that winning is what makes a sport enjoyable, but there’s less learned from winning than there is from losing, no matter how many people want to laugh at such a sentiment.

Sometimes you’ve got to lose for a while to figure out what winning is really worth, and when that revelation comes it makes the hardships all worth it.