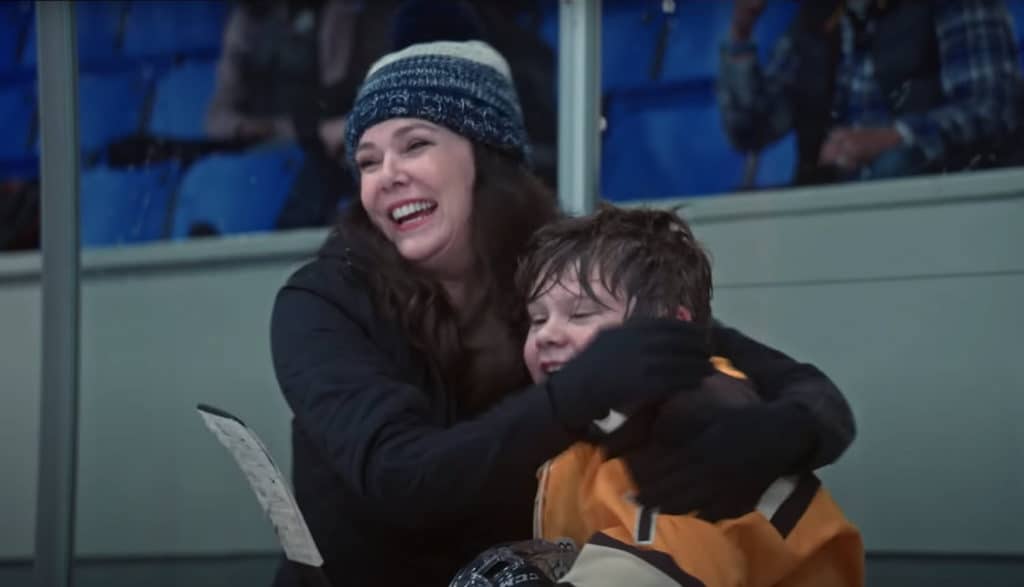 Just when a person might have thought they couldn’t dislike Coach T any further, he goes and opens his mouth and the dislike bar keeps dropping, and dropping, and dropping. It doesn’t help that he’s still sore that the Don’t Bothers scored once on the Ducks to avoid the game being a blowout, but he’s also been shown mocking the Don’t Bothers by calling them clowns, and the parents of the Ducks have even taken to calling the team a bunch of losers, as Sofi’s mother did within earshot of Evan and his mother. Let’s put it out there since the cringe that’s being delivered with the show, which helps the main point of it, believe it or not, makes it impossible not to defend the idea of winning. Competition is healthy, winning feels good, and being able to say that one has worked hard and has earned the win they receive and that they can feel good about what they’ve done. This isn’t that kind of show. The competition in the new version of The Mighty Ducks is fierce, it seeks to exclude those that don’t measure up, and it has no time or sympathy for those that can’t do for themselves. That’s until the Don’t Bothers are formed, and while their attempt to become a team and to pull together spreads the positive message that it’s okay to play and have fun with the game instead of being so amped up that a kid might actually vomit on the bench, their style is still rougher and soggier than a wad of clay that’s been left out in the rain.

To be fair, they’re getting better since they did score one goal thanks to Gordon Bombay’s advice, and it would appear that Bombay is coming around since he also helped with the mom’s hockey event that saw Alex take on her boss and lose because of a technicality, but also outshoot the woman that has taken her for granted for so long. If anything, Bombay is showing how miracles can happen again, but it’s a slow and arduous process, much like separating Koob from his phone is going to be. A lot of people might give kudos to Nick’s moms for stipulating that there were to be no more electronics after a certain time in the evening, and while some parents might have actually balked at this, there are a lot of us that would applaud this and have likely done something not too different. If there’s one issue that keeps Koob down it’s that the world doesn’t conform to his presence as his screen will. The fact that he was wondering why the X button wouldn’t work during a game is indicative of how much time he spends playing video games, and how little of a grasp he has on the concept that pushing buttons won’t get a person through life. Don’t get me wrong, playing video games is fun and can even be beneficial as a way to wind down or get away from the stress of the day. But the fact that Koob uses them as a constant escape from a world that he can’t really deal with otherwise is a bit troubling, as is his reaction to not having his screen in front of him. One thing that was interesting is that we did get to find out that Luke Islam, the actor that plays the character, does have a very nice voice. That makes sense considering that he was a semifinalist on America’s Got Talent back in 2019.

But even when the plan that’s concocted by Nick, Evan, and Koob succeeds in gaining Koob’s phone, the battery dies, which makes it feel as though it’s all for naught. A strange thing happened at that point though, since Koob came to grips with the idea that he didn’t need his screen, that he was okay, and that he could actually relax with his device in hand. It’s progress at the very least, and it’s happening in nearly every way that it needs to at the moment. Speaking of that though, I couldn’t have been the only one cringing when Sofi decided to forge the permission slip she needed to join the Don’t Bothers, especially when it was obvious that she hadn’t left the Ducks yet. The revelation that came when she forgot to take off her Don’t Bothers jersey before attending the Ducks practice though was a huge ‘oops’ moment that made it clear that she’d been running herself ragged. If there’s one message that did finally get made when Sofi’s father gave her the signed permission slip, admitting that he saw what it meant to her, it’s that pushing kids in the direction desired by their parents isn’t always the right way to go. Sometimes it’s wiser to listen to the kids and ask them what they want to do.