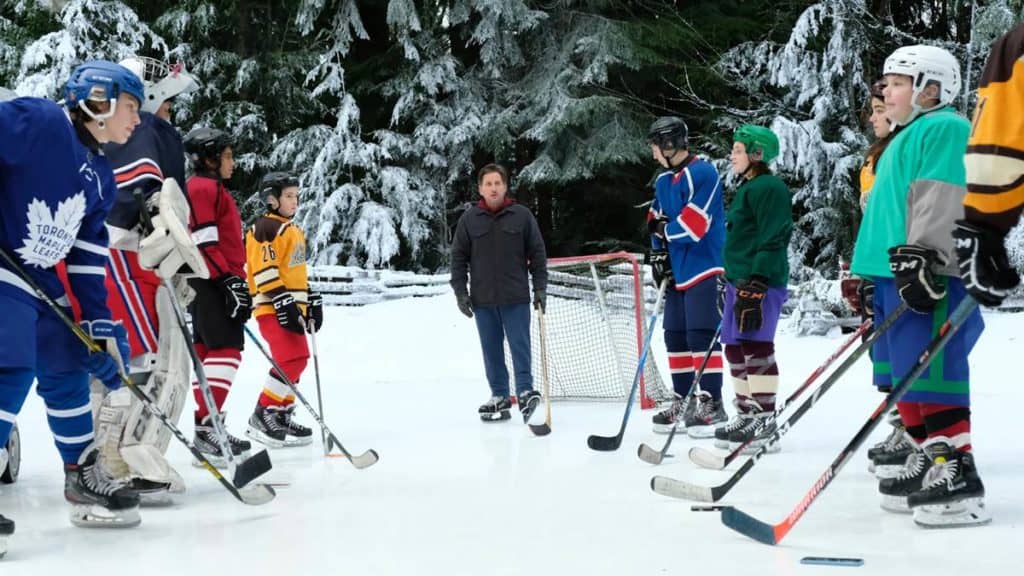 The Mighty Ducks: Game Changers might remind some of us how the days of being a kid were kind of hard to manage at times simply because we didn’t have the emotional capacity quite yet to deal with some of the issues that came our way. What an adolescent or adult might see as a mistake that’s meant to be forgiven and moved past quickly could easily be seen as a massive betrayal by a kid. Don’t get me wrong, kids are far more capable of processing emotions and various social situations than adults give them credit for at times, but the fact is that the lack of experience, even at the middle school and high school level, is still enough to be overwhelming. The moment that the Don’t Bothers saw an Instagram video of Evan practicing with the Ducks they turned on him, treating the poor guy like a Judas as they snubbed him so forcefully that it took Evan’s mom locking them in a locker room to hash it out. Obviously Gordon didn’t see any issue with this but was ready to admonish Alex for trying to shorten her own idea and talk to the kids, which was right of him to do for a number of reasons since Alex still has a lot to learn about being a hockey coach. Thankfully, Bombay is willing to teach her and step aside when she has something to offer. But blindfolding the kids to teach them how to ‘feel’ their way around the rink was kind of an awkward idea. The application was questionable, but the theory is still pretty sound, and at the end of the episode it did pay off, in a strange but useful way. Overall, the Don’t Bothers are growing stronger as a team and picking up a few tricks here and there much as the original Ducks did in their own time.

If there is a downside to this show at the moment it’s feeling a little TOO neat and ordered since Evan’s redemption didn’t exactly take that long, but given that kids can grow angry with each other, snub each other, and then become friends again in a short amount of time, that’s not the issue. The issue is the same thing that tainted the original Mighty Ducks movie, and it’s something that won’t be dropped since this is Disney after all, and cute and endearing stories are a bit part of what the Mouse House does. Being that the Mighty Ducks aren’t a part of the MCU, and aren’t related to any other adventure story that many fans have come to love over the years, it’s fair to say that being cute and friendly is going to be a theme that will only be offset by the fact that the Ducks are going to be vicious and driven, right up until someone figures out that Coach T and his team are a little too intense. It almost feels that one season might be enough to tell this story, but with people talking about season 2 already one has to wonder what’s going to happen to the story once the first season is done and over with. One also has to wonder what’s going to happen as the kids continue to grow and mature, since it’s bound to happen that season 2 wouldn’t be arriving for a while, and things are bound to change in a pretty significant way.

Getting back to the story though, it was uplifting to see Gordon take the kids to play a little pond hockey, as the old-school feel is still there and the idea that he had them use their cell phones instead of eggs was a nice touch when teaching passing drills. And the way he inspired Koob to move faster was a bit dubious but definitely useful since telling the goalie that the ice was about to break beneath him got Koob moving faster than he’s moved throughout the entire season. Not only that, but the goalie learned how to move his hands and his feet to block shots that only an episode ago were sailing right by him. In other words, he forgot about trying to find the X button on his controller and realized that moving around could do much, much more to help the team. The only other individual that really appeared affected was Max, who apparently lost his will to do crazy things when it looked as though Evan had given up on the team. Thankfully that didn’t last long though since all that had to happen was to remind Max that he was the team’s X factor, and he was back. So it’s fair to say that one major crisis has been averted, as Max and Sofi even went so far as to reconcile. In other words, the Don’t Bothers are still a team, and even stronger than before.