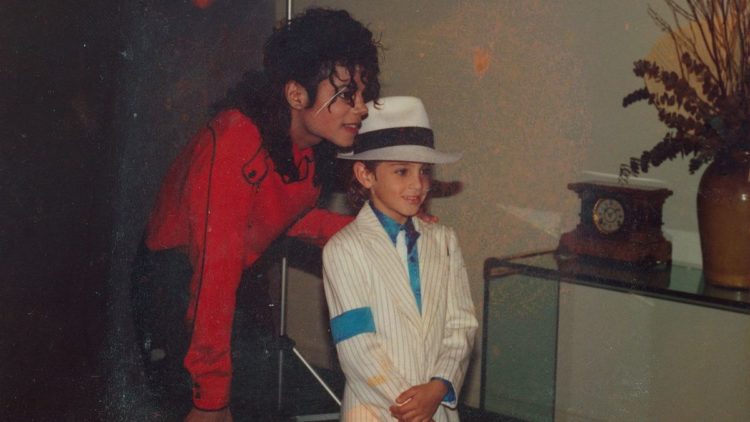 I don’t even know where to start with this article.Â  Just the fact that I’m writing about it makes me cringe.Â  I spent four extremely tough hours watching “Leaving Neverland” last night.Â  It was one of those programs like the movie “Schindler’s List” where you feel like you know you don’t really want to watch it but you know that you have to.Â  It’s just one of those important films that you’ll regret not seeing even though you know you’re in for an extremely tough ride.

First of all I want to start off by saying that I feel for Wade Robson, Jimmy Safechuck, and every single other little boy that had to endure what I can only imagine to be the most horrible life realizations as well as tough decisions later in life to confront their horrors.Â  I’d also like to go on record in saying I 100% believe every single thing I saw in the video.Â  And one more thing.Â  Even if the allegations weren’t and aren’t true, to go through touring with who was by far the biggest star on the planet at that time and only be just a small child will have permanent affects no matter if abuse took place or not.Â  That’s just not the kind of life a child should lead, period.Â  Tack on what I believe to be certain instances of abuse and these men will never, ever be the same again.

While I also don’t want to get into too much detail in terms of the actual abuse and painful things that were said, I do want to add that boy oh boy there seemed to be an awful lot of proof here.Â  I had no idea these guys kept so much stuff of Michael Jackson’s.Â  I mean the faxes, the recorded messages, memorabilia, jewelry, you name it.Â  There’s just so much there.Â  If you simply think that Michael Jackson was just one of the most generous people in the world and absolutely no more that that, then there has to be something wrong with you.Â  Again, even if no abuse occurred (which I think it did), I mean come on.Â  Sleeping in the guy’s room?Â  Taking them places for weeks at a time?Â  It’s one thing to hold hands and sometimes that’s cute, but everywhere and all the time? It was creepy.Â  No sane parent in the entire world would think this is normal behavior for an adult.Â  “But he loved kids so much!”Â  Really?Â  I mean, really?Â  Come on people.Â  Just use your heads for 2 seconds here.Â  Which leads me to the subject and anger of this piece.

Stephanie Safechuck and Joy Robson are two of the worst mothers on the planet, period.Â  When I digested the entire 4 hours the more and more I thought about that video, the more upset I got at Jimmy and Wade’s moms.Â  The more I kept thinking about how selfish they were.Â  The more I kept thinking about how the time they spent with Michael Jackson was equally if not more about them than their children.Â  And I’m quite certain the reason I was thinking about this is because I too am a parent.Â  I have two boys, ages 2 and 6 and I just couldn’t believe so much of the stuff I heard coming out of these mothers mouths with regard to what they allowed their children to do with a grown man who was not a relative, nor even close with them in the early stages of when they would let their boys spend so much alone time with Jackson.

And let me just stop right there by saying that I’m not discounting, in any way, the profound effect and power that a person like Michael Jackson possessed and how that power could make anyone let alone two children become completely infatuated, obsessed and willing to to anything for Jackson.Â  I can’t imagine how attractive that lifestyle must have been and I can’t imagine how hard it would be to say no to a person like Michael Jackson.Â  So while I acknowledge this difficulty I’m still going to go right back to being a parent in saying “What the f*** is wrong with you two?”Â  Seriously.Â  What in the hell is your problem?

Who in their right mind lets this happen to a child?Â  I’m sorry but I simply cannot get over this.Â  I just can’t.Â  I honestly can think of maybe 3 people in the entire world other than my wife and I who we’d let our kids sleep with.Â  Not only that, maybe 3-5 people we’d let our kids be alone with for more than an hour.Â  But spending an entire week or month ALONE with someone they barely know?Â  I’m calling bull****.Â  Â I just can’t.Â  I cannot for the life of me get over this and I think most people reading this should not be able to get over this either.Â  Now that Jimmy and Wade are parents and having seen their reactions to how they’d feel if someone were doing this to their own kids, I can only imagine the anger they must have towards their mothers and how their anger will likely live with them for the rest of their lives.

Every single time Stephanie and Joy spoke, it just creeped me out a little more and more.Â  “I didn’t think anything was wrong.”Â  Really?Â  What parent in this world wouldn’t think something was wrong?Â  What the hell is going on here?Â  I’m getting way too pissed just writing this.Â  I think I made my point.

Again, my hearts go out to all of the children who likely suffered abuse at the hands of Michael Jackson but I’m also placing blame square on the parents shoulders here.Â  I mean Jesus people, use your common sense.Â  I’ve said my piece and I’m going to go punch a hole through a wall now.