Home
Movies
The Movie Musical: Singin’ in the Rain as the Enchanted Archetype 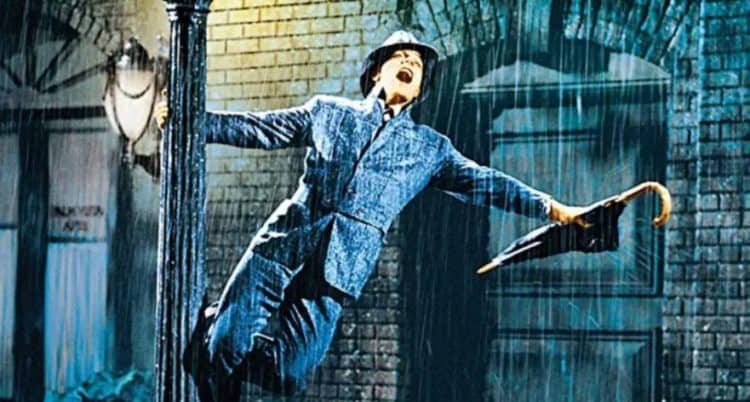 Many genres occupy the studio talent pool, however, “without a doubt, one of cinema’s most unique genres is the musical film” (Hoffman). Movie musicals were a staple genre of classic Hollywood beginning with the first talking picture The Jazz Singer in 1927 and oddly enough, the picture that many critics consider to be the greatest movie musical of all time is a film based upon The Jazz Singer’s impact. Filmed in 1952, “Singin’ in the Rain represents the pinnacle of movie musicals” (Buchman). Singin’ in the Rain (Kelly and Donen, 1952) has greatly impacted every movie musical produced since its creation and although remnants of the film’s influence are still hugely noticeable, modern day movie musicals such as 2007’s Enchanted (Lima) illustrate how the contemporary movie musical differs from the archetype established by the 1952 classic.

Not only does Singin’ in the Rain exist in a vacuum as a phenomenal individual achievement in film making but it’s “also a wonderful document of American film history” (Buchman). This is because Singin’ in the Rain serves as the quintessential model of the film musical by flawlessly establishing the shift between “two different dramatic registers – that of the narrative and that of the spectacle” (Belton). This shift is seen many times throughout Singin’ in the Rain but perhaps the best example is near the end of the film when Don’s (Gene Kelly) vision of “The Broadway Melody” is portrayed. The shift in register occurs as an extensive fantasy sequence injecting the “lift or experience of ecstatic pleasure” (Belton) typical of the cinematic musical number. This shift in register, where “song and dance replace the dialogue, usually during moments of high spirits” (AMC), is also used prominently in the contemporary Amy Adams musical Enchanted. In Enchanted, Adams’ character Giselle signifies the shift from narrative to spectacle by performing the nearly four minute long musical number “That’s How You Know” in the middle of New York City’s Central Park. In both instances, the actors are absorbed into the musical number, thus being released from their “duties and responsibilities as credible identification figures” (Belton). After each number is concluded, the characters melt back into the fiber of the narrative having achieved the desired effect of lift.

Enchanted chronicles the adventures of “animated characters that get sent to the real world, but they don’t change the way they act or think” (Weintraub). On the surface this seems like an absurd premise but the scenario works because like Singin’ in the Rain, dignity is at the forefront. Singin’ in the Rain and Enchanted both share elements of the musical subgenre of the book musical. This is because both pictures attempt “to integrate narrative and musical sequences” (Belton) resulting in the “seamless integration of story and music” (Belton). An example of Singin’ in the Rain’s book musical status would be when Don and his cohort Cosmo (Donald O’Connor) break into song in the midst of Don’s dialect lesson, integrating the actual lessons from the scene into the musical number with “Moses Supposes”. The integration between story and music attempts to be just as seamless in Enchanted as Giselle begins to tidy up the dirty apartment in which she is a guest. As she happily cleans, she sings a musical number, appropriately titled “Happy Working Song”. In addition to both films having characteristics of book musicals, both pictures also fit the definition of integrated musicals “in which the story’s characters naturally express their emotions in the midst of their lives” (AMC).

The key feature of the integrated musical is the “shifts back and forth within the number between its status as performance piece and narrative exposition” (Belton). Singin’ in the Rain exhibits this interaction with the musical number “Good Morning”. The performance of “Good Morning” by characters Don, Cosmo, and Kathy (Debbie Reynolds) is contained between two narrative spaces of a single scene. After the musical number is concluded, the characters actually revisit the song itself in a lip-synching exercise. By recognizing the elements of the musical number in the narrative, the narrative space, once shifted to the musical space, has effectively been restored. In the same vein, Enchanted is shown to be integrated during the number of “That’s How You Know”. When Giselle bursts out into song, her new acquaintance Robert (Patrick Dempsey) repeatedly marvels at the wonder of a musical number erupting around him in the middle of the Big Apple in the middle of the day, refusing to take part in the spectacle stating “I don’t dance and I really don’t sing.” As Robert, a member of the narrative space, observes Giselle’s musical space, the integration is established as “the two spaces acknowledge one another” (Belton). Although Singin’ in the Rain and Enchanted share many common features of the movie musical, there are also glaring differences.

Singin’ in the Rain and Enchanted can both be considered integrated book musicals, however, each fall into additional subgenres. These are fundamental differences in the forms in which both films present the motivation for musical numbers. As Singin’ in the Rain “focuses on the transition from silent to talking films, demonstrating [the] rise to a new cinematic genre” (Alon), it exemplifies the classical definition of the musical subgenre of the backstage musical. The backstage musical overcomes the obstacle of shift motivation beautifully by incorporating “performance into the plot. The film’s characters are identified as professional or amateur performers whose normal activity involves singing and dancing” (Belton). Since the plot revolves around musical performance, the musical numbers in Singin’ in the Rain occur organically. It is firmly established that Don, Cosmo and Kathy are professional entertainers so it does not seem out the ordinary that the register shifts from narrative to spectacle. Enchanted presents an entirely opposite motivation.

Enchanted does not rotate around “the milieu of the theater” (Belton) and thus, does not offer a bridge to musical sections by incorporating performance into the plot. Conversely, Enchanted displays many characteristics of the Operetta, which borrow narratives “extensively from fairy tales” (Belton) and “are populated with princes and princesses” (Belton). Unlike the backstage musical, the operetta does not offer “solid justification for certain activities in that particular world” (Belton). Enchanted occurs in a world that “features a princess, an evil step-mother, a prince, [and] animals that can talk” (Weintraub). When asked how she prepared to perform her musical numbers in Enchanted, Adams responded “what I trained to do was try to sing in that sort of operetta style” (Weintraub). Unlike Singin’ in the Rain and even modern day musicals such as Burlesque (Antin, 2010) and the Pitch Perfect (Moore, 2012) films, Enchanted does not offer the “realistic anchor” (Belton) of the professional music world and thus achieves the shift in register in the style of the operetta as opposed to the backstage musical.
People love musicals because “a musical is an escape into a different, more interesting, more sonically beautiful place” (Nelson). Singin’ in the Rain is the musical that all other musicals aspire to be and Enchanted is no different. Although not achieved using the same realistic motivations, Singin’ in the Rain and Enchanted both provide the necessary energy, lift and ecstasy to entertain people by shifting registers from the narrative to the spectacle. Both of these movie musicals make people smile and what’s more, they both achieve this with dignity. Always dignity.