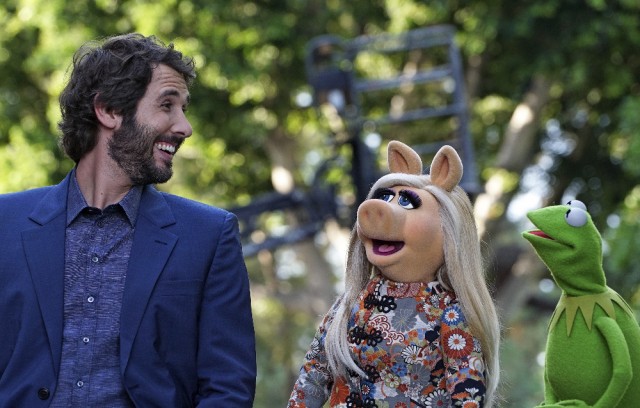 The Muppets are now in week two of their of their latest television venture. So far, I think they still have something special and successful going. The comedy is smart, rich, and funny, and the characters (though they are Muppets) feel genuine and real. Sometimes, week two can be more indicative of how a show will perform, and ifÂ The MuppetsÂ continues to deliver week two-caliber episodes for the rest of the season, I can say that I will most definitely be satisfied.

This week onÂ The Muppets:Â Kermit sneakily finds Piggy a date to the People’s Choice Awards (Josh Groban) who then becomes her boyfriend. There are mixed reactions to Piggy having a boyfriend, because it makes her pleasant and the show terrible. Fozzie is invited to a party at Jay Leno’s house, but insists on taking a souvenir.

I will admit that I thoughtÂ The MuppetsÂ second showing was down a little from the pilot episode. The pilot presented a fresh concept and established a whole new world. The second episode, however, was filled with celebrity cameos and leaned a little more on the format of the new show. It wasn’t bad necessarily, but it felt a little different than the pilot.

I actually really liked the appearances from real-life celebs. Jay Leno, Josh Groban, Lea Thompson, and Laurence Fishburne all made the most of their limited time on camera for maximum comedic effect. If there is one thing thatÂ The MuppetsÂ seems to have mastered in its short time on air, it’s the celebrity cameo. All of these are impressive talents, but it takes a special show to use them all in such unique ways.

If we’re talking about things I didn’t love (which is hard to come up with in The MuppetsÂ because…well, Muppets), I wasn’t a big fan of the “Fozzie steals stuff from Jay Leno” plot. Some of it was amusing, but most of it just made me a little uncomfortable. Fozzie should be a little more cheesy and quirky, and a little less of a weirdo.

Overall, though, I found “Hostile Makeover” a solid follow up to a solid pilot. The writing is still smart, and the “modern twist” to the Muppet format seems to be working out well. And boy, is it funny.

What did you guys think? Did you enjoy this episode? Did you like it better or worse than the pilot? Let us know in the comments!