Home
Movies
The “My name is Inigo Montoya. You Killed my Father. Prepare to die” Compilation 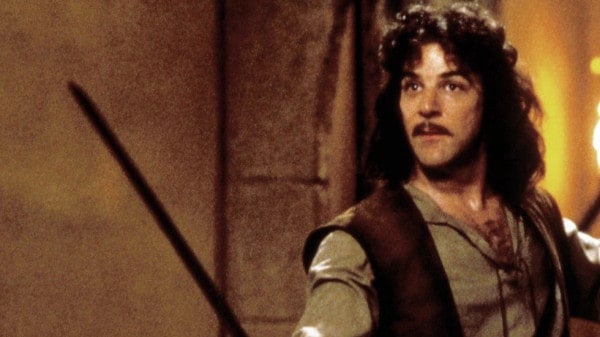 Out of all the catchphrases in The Princess Bride, the one that goes “Hello, my name is Inigo Montoya. You killed my father. Prepare to die.” is likely one of the most popular and most well-respected as well as remembered given how many times it was uttered. ‘Inconceivable’ is perhaps the only other one that comes close during the movie since it’s used so often. But throughout pop culture it’s a little more than obvious that the three sentences have been taken again and again and spoofed more than once while being respected quite often since they’ve been seen as so iconic that spouting them over and over has become expected in a way. But hearing them from the lips of someone in this manner, meaning over and over as Inigo used them, does tend to needlessly repetitive after a while even if the saying is pretty cool. When you think about, Inigo had every right in the world to feel a certain way about the matter and repeat the line over and over, since it was something that kept him going and kept him searching for the six-fingered man that had taken so much from him. A lot of people could possibly state that there are certain things that seem to repeat over and over when losing someone in a tragic manner, though the trauma of such a thing does tend to take away the otherwise nature of the line.

Inigo Montoya was actually one of the more positive characters in the movie despite starting out as a bad guy, as both he and Fezzik were there as cronies and didn’t really have the heart for kidnapping that their shorter and much more cynical leader did. Once they were given the chance to prove their worth they did manage to switch sides and become good guys fairly easily. Inigo though had a very clear reason for existing whether it was good or bad, as he wanted revenge on the man that took his father from him. That definitely stands out as a noticeable part of the story and it’s one of the things that many people throughout the history of the movie have picked up on since Inigo, despite not being the main character, has one of the best lines ever devised in the history of the movies. It’s simple, it’s direct, and it lets the enemy know just who he is and what’s going to happen, and why. Face it, if someone took your family member from you and you had the means to enact a bit of revenge in this manner, without legalities or laws or courts being involved, how many people would hope to come up with a line that was half as cool as this?

What’s even better is that the moment he’s defeated, the moment it would appear that Inigo will NOT be gaining his revenge, is when he becomes a bit stronger, more forceful, and falls back on that one line that keeps him from falling. He’s hurt, he’s losing a lot of blood, and he might keel over at any moment, but the memory of his father and the need to take his revenge is strong enough that in true movie fashion he calls upon one last reserve of strength and continues to advance, spouting the same line over and over as his strength returns and the words become more forceful with each exchange. Tell me that didn’t get you pumped up even as a kid and I’ll gladly say that you’re lying at least a little bit since moments like this are typically crafted to increase the adrenaline surge within the audience that might have already been riding high and pushing the people to embrace the cause and cheer for Inigo since he was gaining ground and finally looked to be getting what he was due. Once the fight ends you get the feeling that Inigo is without a doubt satisfied with the result, even if it won’t bring his father back to him. It still stands as a way to honor his father and make sure that the six-fingered man won’t harm anyone else, and it gives Inigo a good deal of closure finally.

Advance a couple of decades and you find that no matter how many people have forgotten parts of the movie, most still remember it well enough that they can quote certain lines, and many can still speak this line verbatim since it made such a huge impact when it was first seen on screen. While The Princess Bride didn’t exactly stand out as a blockbuster for a while it’s still a pleasing childhood memory that many of us can agree was something special back in the day and still remains that way today.

As per William Goldman of Spark Notes, “Hello! My name is Inigo Montoya! You killed my father! Prepare to die!” Oh yeah, it’s still great.