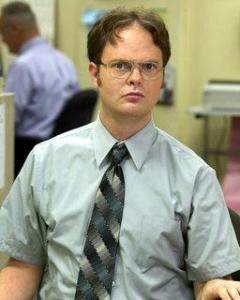 It was the moment fans of The Office have been waiting for this season. When was Andy finally going to stop being the only one in the office that didn’t know about Dwight and Angela’s affair? The answer: right about now.

‘Duel’opens up on a foot race outside the Dunder-Mifflin office building, where there is a newly installed radar board that posts the speed of cars going past. Michael hits 12 mph. Dwight makes 13 but Michael disallows it because it was really clocking the wind, he claims. On Oscar’s turn, Michael takes off ahead of him, at the same time a car is traveling past. Michael thinks he has run 31 mph and rubs it in everyone’s faces.

Back inside, Andy has arrived and he seems distraught. The group tenses because they think he has found out the dirty little secret. He is upset, actually because the deadline for the wedding RSVP’s has come and gone and no one has replied. Michael can’t believe it. ‘You don’t know abo–’he keeps trying to ask but is shoved back into his office by Jim, who recognizes that discretion is the better part of ignorance.

All around the office there are discussions going on about the sordid affair, and somehow Andy is oblivious to every one of them. Jim: ‘Eventually he’ll figure it out. When their kids have giant heads and beet stained teeth.’

Dwight is on edge, because he knows Andy, who has a rather legendary anger issue, will be gunning for him when he finally does find out. He is constantly shifting his position so he is facing Andy. He says that as a child he, along with all the Schrute boys, learned many valuable lessons. Dwight: ‘Rule 17: Don’t turn your back on bears, men you have wronged, and dominant mating turkeys.’I wonder which relative added the last one. I’ll bet that has an interesting story attached. Back at his desk, Dwight sends Angela a signal by moving his Dwight bobble-head from one side of his name plate to the other. They quietly duck out, and Dwight attempts one more time to get her to tell Andy. She thinks that is one of the worst ideas he’s ever had and walks away in a patented Angela huff. You know, the haughty, rhymes-with-witchy kind.

Everywhere Andy goes, people are talking about something and won’t tell him what. He asks Jim, Dwight and Michael, but they just walk into Michael’s office and close the door on his face. Inside, Dwight insists Angela should tell him when she is ready. Jim thinks this kind of information should not come from his boss, and that it definitely shouldn’t happen at work. Michael wants to know if Angela is crazy in bed. Dwight: ‘Yes. And flexible.’Jim and all of us are horrified that we now know that. Michael has decided that he is going to tell him, and that now is the best time. It’s only coincidental that the perfect time to tell him is as he’s leaving for the day.

Michael asks Andy to walk him to his car. He stammers and fumbles for words as they walk across the parking lot until he is safely ensconced in his car and just about to pull away. Then he quickly mumbles that ‘Dwight and Angela have been sleeping together for some time.’Andy is left agape as Michael beats a hasty retreat and leaves this mess in Jim’s hands. The staff has been watching this from the conference room windows, including Angela, who looks slightly worried.

Andy walks slowly back into the office and approaches Angela. They go into the conference room to talk about it. She tries to dodge the question but he finally gets it out of her that she has, in fact, been sleeping with Dwight. When he asks who else knows about it a look out the window at the entire staff watching them answers that question.

Meanwhile in New York, David Wallace is telling Michael that the sales staff at the Scranton branch is out-performing every other branch. Michael somehow does not explode in glee when he finds out that for once he has a win, so I do it for him. Squee! The head office wants his advice on how to be more successful. Still adjusting to this bizarro world, he tries to wax philosophical about his ‘methods.’Michael: ‘Don’t ever do anything to anyone for any reason ever no matter what. Ever.’In an interview in the hall he explains to us that sometimes he starts a sentence without having any idea where it’s going. Like an improv conversation. Improversation, he calls it. Back with David he asks if it can be made three degrees cooler in the room. I can’t decide if this means Michael is nervous, or if it’s a case of sudden-onset divaness. With Michael it’s probably a lot of both.

Back in Scranton, Angela and Andy are still ‘discussing’her affair. Angela: ‘Standard. Nothing fancy.’Andy: ‘Like missionary?’Angela: ‘I said nothing fancy.’

Andy comes out of the conference room and demands to know where Dwight is, and by the way, he says while oozing sarcasm, thanks a lot guys for not telling him about the affair. Creed: ‘You’re welcome!’Dwight emerges from the break room and the two men begin to posture at each other. They agree to a duel in the parking lot at 4 o’clock. Pam, who finally gets a line in this episode, tells Angela that she needs to put a stop to this right now. Angela: ‘I will respect the results of the duel.’Meredith: ‘I call loser.’
Back from commercial, Jim is going around the office collecting Dwight’s secreted stash of weapons. In the box are nunchuks and a machete, and Jim pulls a curved sword from behind the copier. Meredith: ‘There’s a star shaped thing taped under the kitchen table.’

Michael is still in NY boring Wallace. He is telling him a story involving a corny joke as if he’s dispensing pearls of wisdom. Wallace tries to drop hints for Michael to leave but Michael doesn’t get them. Wallace, afraid to somehow mess with their one and only profitable branch, sits down helplessly. Michael: ‘I am so impressed with the potential you see in me.’

Back in Scranton, Dwight is in the parking lot waving some kind of a ropey belt looking thing. I’m sure it is a weapon of some kind, but I have no idea what it is. He is screaming for Andy to show himself. It is 4:10. The staff watching from the office think Andy isn’t going to show up. Angela seems flush with excitement. Angela: ‘I can’t believe they are going to fight over me.’Kelly: ‘I guess people have fewer choices as they get older.’

Dwight notices a note pinned to the hedges over by an empty parking space. He runs over to read it. As his back is turned, Andy pulls into the parking lot in his Prius, which is silent if he keeps it under 5 mph. Dwight has no idea that Andy is right behind him until just before he is pinned up against the hedge. They shout at each other through the windshield. Dwight: ‘You can’t protect her.’Andy: ‘From what, bears? When’s the last time you saw a bear in Scranton?’Dwight: ‘Last year, idiot.’Andy: ‘I can’t believe she’s been sleeping with you this whole time and she’s only slept with me twice.’This is what does it. This is where Dwight deflates. He had no idea his girlfriend was cheating on him with her own fiancÃ©.

The two men slowly return to their desks, neither men’s eyes meeting Angela’s. Andy picks up the phone and calls to cancel the wedding cake. Dwight, knowing Angela is watching him, picks up the bobble-head-signal and chucks it in the garbage. I couldn’t be happier with this ending. I love that she got neither guy. And she lost what little respect she had from everyone in the office. The whole Andy being played for a fool while Dwight and Angela were screwing around plot line was starting to drag out, so I am also glad this puts that to bed, so to speak. I wonder how the two men will move forward. It would be interesting to see if they end up friendlier to each other after this.

Parting shot: The last scene of the episode has Jim catching Dwight trying to sneak off with the giant crossbow he hid under the reception area couch. Said crossbow is confiscated. 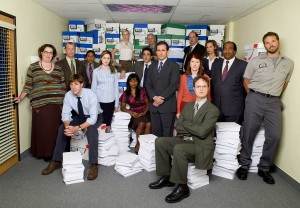