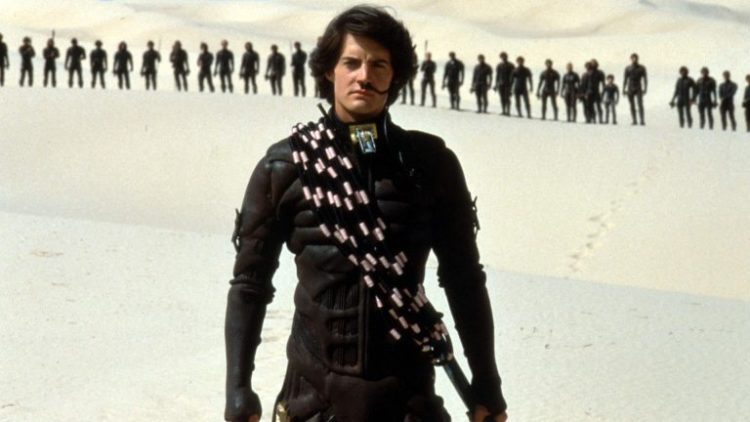 Given the cult status that Dune has gained over the years one might be scratching their head at David Lynch’s proclamation that he’s not proud of the movie in the least. There is more to it than just his desire to step away from the movie entirely, as it’s not so much a snub as it is a choice just to forget that it ever happened. He has nothing against the new version that’s being made by Denis Villenueve, he simply doesn’t want to be reminded of what he came to think of as a total failure. The problem of course is that Lynch didn’t get a final cut and there were simply too many issues on set and the entire thing felt like it was a complete wreck to him by the time all was said and done. That’s kind sad really considering that Frank Herbert’s story wasn’t told in such a bad by Lynch, but the obvious notion is that he’s a bit of a perfectionist and it’s not hard to think that many directors want to be able to take control of the final cut, which is the right to take control of the final edits. This is important largely because as the movie is typically the director’s vision, they prefer to have as much control over it as they possibly can. Taking that from a director is kind of like taking a book from an author and making edits that the author had no intention of making, without giving the author a choice. So if you’ve ever written something had someone take huge chunks of it out before telling you to do it again then you might understand how much this can sting.

The new and upcoming version of this movie, which is supposedly coming to theaters in December of this year, is of no interest to Lynch, though he’s been done with making movies and is proud of everything else he’s done. Something tends to indicate that he’s simply tired and doesn’t want to talk about it any longer, which is understandable. No one wants to be reminded over and over of something they’ve tried to distance themselves from, though plenty of people still want to know why he feels the way he does. It’s usually better in that case to take the word of the articles and interviews that have already been written so as to give the man a bit of peace. Those movies that he’s proud of are those he would likely talk about at length, as he has created several that have been thought-provoking and even a bit odd in their own way. But the point is that Lynch hasn’t distanced himself from anything but this one movie, and the reason behind it is that he didn’t get to have his way with it, which might sound like a bit of whining to some people but goes a little deeper than that. The story of Dune is a great one to tell, and to be fair, Lynch’s attempt was easier to receive than the version that came later, though Villenueve’s attempt is looking pretty solid thus far.

One thing that many fans of the original story are wondering is why the other books haven’t been picked up on as of yet, since there is so much more to Dune than the one book. In a way, this story could rival Star Trek or Star Wars if it was to be fully realized on the big screen or even on TV through an episodic program. That’s a bold claim to be certain, but it’s one that many people would gladly stand behind since the story of Dune has continued onward in the wake of the first book, developing in a big way as other aspects of the universe have stepped in to take over where the original story ends. It’s a bit odd why no one has thought of this since the story of Dune is something that one can’t help but think could be something great, a new breakthrough with an old story in an attempt to create another franchise that could possibly stand up and announce itself in a way that could be fully accepted and therefore taken to new heights with added stories that could tie in to the original.

Perhaps if Villenueve’s attempt proves fruitful we’ll see something of the sort, though only time will tell at this point. Dune is a great story as many would agree, but it definitely needs to be further developed and fleshed out since going back to the original story over and over feels as though each version has been a false start and that many people are hesitant to move on in any significant manner. A story has to grow after all, and this one has a great deal of potential.