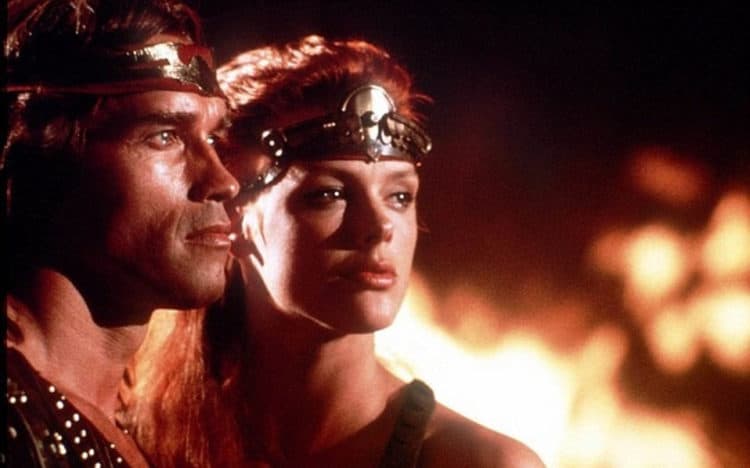 It’s a misguided assumption to think that a movie is going to be great just because it’s connected in any way to another, bigger movie that takes place in the same universe. Red Sonja has been a name that many people have known for years now since she’s been built up as one of the greatest warriors to ever be created for the comics and the screen, but the movie was pretty horrible despite the forgiving nature of many Conan fans. Arnold Schwarzenegger has been in a lot of movies over the course of his career, but this is one of those that he can’t help but regret since Red Sonja was a crash-and-burn type of movie no matter how a person wants to look at it. One can say that the Conan movies might have done better with more advanced effects, but back in the 80s, this was what was there to be used. For Red Sonja, though the effects were still beyond cheesy since they made Conan the Destroyer look hi-tech in a number of ways. From the story to the effects, Red Sonja was a flop that’s been remembered solely because the story was something that could have been so much better if it had been given more attention and a bigger budget for better effects. One of the primary fight scenes was horrible simply because it could be seen without any trouble that the creature was fake and that it had a set course that it had to travel along for the length of the scene. Granted, the giant snake in Conan the Barbarian was an easy effect to see around, but it was still done in a far more effective manner than the creature in Red Sonja. Heck, even the demonic wizard in the Destroyer movie was better than the mechanical beast.

And let’s be honest, Kalidor, the warrior that Arnold played in the movie, was a knock off Conan, and in fact, some people were hoping that it would be Conan since it would make sense for Sonja to hook up with another highly-skilled warrior that could possibly best her in time. But overall it’s not difficult to see why Arnold regrets taking this role since the movie didn’t end up being even half as popular as the Conan movies. The trouble here is that Red Sonja has a very strong base that could be developed into a very screen-worthy movie. There are days when it’s simply frustrating as a writer to see stories that could be looked at and given a fresh look that might carry them through with a few key changes to the script and a strong plot that could carry them from obscurity to show people that the movies are worth more than a minor remembrance that they’re given from time to time. The fact that Arnold regrets starring in this movie says a lot given that he’s starred in a number of movies over the years that have either been huge or haven’t been seen as that big of a deal. Every actor is bound to have a few movies under their belt that didn’t perform that well, but the thing about this is that the Conan movies, that were set in the same era, are still to this day seen as great movies that really helped to build Arnold’s reputation. Red Sonja didn’t really do that, and in fact, was kind of a speed bump that didn’t really do much to stop or even pause his growing fame, but wasn’t a big push either.

It’s a wonder why no one has bothered to try to reboot Red Sonja at this point since Conan has already been given the reboot treatment with Jason Momoa as the titular character. Obviously it didn’t perform that well, but it could have something to do with how far the movie strayed from the original, or it could be that people just weren’t ready for such a legend to be brought back without Arnold as the lead. The fact is that the actor is a bit old to take on the same kind of sword-swinging role that he made look so good when he was younger, but it could also have something to do with the fact that the cast of the Conan movies was a reason why people kept watching as well. Red Sonja didn’t really have that. Kalidor was probably the best part of the movie apart from the main character, and if anyone was watching, Sandahl Bergman was in the movie as well as Queen Gehdren, the main antagonist. If you’re still drawing a blank, she was Valeria in the first Conan movie, where she was actually given a pretty decent character to play. It’d be great to see both Conan and Red Sonja come back in their own movies, but until that happens they’re pleasant memories at least.