Home
Movies
The Pros and Cons of Rebooting Maximum Overdrive 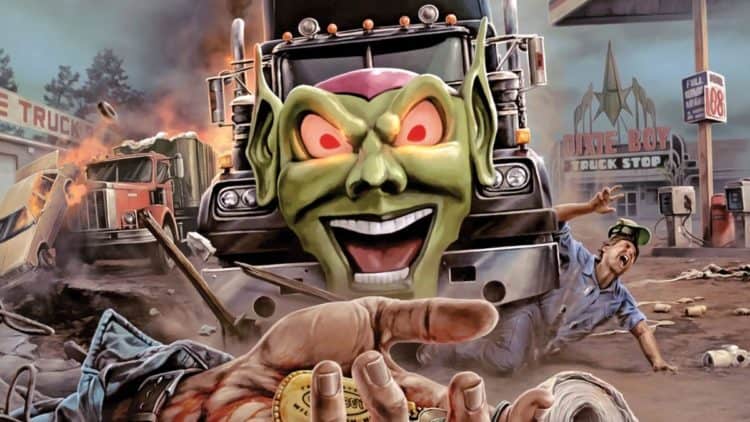 It would be interesting to know just how many people actually remember Maximum Overdrive, not because it was released in 1986 and was pretty campy, but mostly because, well, it wasn’t exactly a huge movie that a lot of people would remember, and it was pretty cheesy in quite a few spots. The whole premise is that earth has passed through the tail of a comet and as a result, every machine in the world has suddenly gained a life of its own. It doesn’t matter if it’s powered by an engine or electricity, the machines come to life and start attacking humans. There’s really not much rhyme or reason to it since the whole idea that one might get is that machines with an electric current feeding them would be a definite threat since there’s a grid feeding them their power. But anything else didn’t make a lot of sense considering that it took a human presence to hit a switch or pull a cord to start anything else up. Of course, that didn’t stop a bridge from operating on its own, thereby causing mass damage as those that were caught on the bridge as it rose found themselves rolling off to either side or into the river below. The idea to bring this movie back has its pros and cons, but it might still be a possibility since with enough updates the world might be in real trouble since the technology of the current era might be kind of terrifying if such a thing happened now.

Here are just a few of the pros and cons that could be looked at when trying to reboot this movie.

It’s a terrifying idea that would work perfectly in this day and age.

Smartphones could become kamikaze machines that might explode in a person’s pocket or when they’re being held to their ear (people still do that, right?), and it’s even possible that a person’s Fitbit could find a way to fry their wrist, or a smart car could drive their passengers off the road or something equally dangerous. Looking around at all the technology that we rely on today it’s easy to think that any of the machines we depend on could do some serious damage when it comes to turning on a human being. If the effect still extended to anything and everything that operates on fuel or an electric current of any sort it’s very easy to think that this could create a real and extremely terrifying threat since people use technology for a number of things that could turn deadly in an instant.

The casting decisions would be open to a wide array of people.

As a reboot, it’s possible to cast just about anyone and even think about a different setting that would work for the movie. A truck stop in the middle of nowhere, or at least as close as it could be, was a good choice for the original movie since it was isolated and didn’t afford the survivors a lot of hope. It was hard to make out just how many people had been affected and how many had actually survived by the end of the movie, but it was implied in a way that the worldwide event had taken a good number of lives and that there weren’t many people left. But in terms of the cast, it does feel as though pretty much anyone could be used, but it might help if there were a couple of hard-luck cases in there just to appease older fans and tell a similar story.

It’s not likely that we’d see any of the original cast members.

Pat Hingle wouldn’t be possible to get since the actor passed away a while ago, and to be fair he was a despicable character but he was still great for the role. It doesn’t feel likely that Emilio Estevez would come back, but I would hope to be wrong about that. Apart from that, several of the former cast members are still around, but whether or not they would come back for a cameo is kind of hard to say. Still, it would be a welcome sight, but in terms of having a younger cast, it would be required to look for other, talented individuals to take on the roles that made the movie what it was.

It would have to be a very different movie.

The technology available today would make this a very different movie than before but could be trusted to maintain some similarities. Imagine though the global scale that would be used for this movie, or possibly a series, and then the scope would truly be felt since planes would likely collide in midair or come screaming to the ground. Plus, military technology would be a serious threat considering that the original movie only used one massive machine gun, and an updated version could make use of some truly horrifying tech.

Did anyone else get excited thinking about the possibilities of this project?