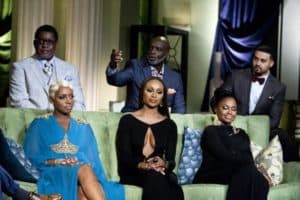 Well damn… Just when you thought the three-part reunion to The Real Housewives of Atlanta was headed straight to Dullsville, the Georgia Peaches came roaring back with enough drama and craziness to last another three seasons and possibly set the stage for more incarnations of the Real Housewives brand as well. Did Apollo Nida (Phaedra Park’s husband) really text co-star Kenya “Cuckoo for Cocoa Puffs” Moore? How bad was it watching Porsha Stewart defend her marriage when it came crashing to a sickening halt a week after the reunion taped? Was Walter-gate ever solved? Did the Husbands give anything worth watching on the show? Read on for my reaction…

The Golden Have A Seat Award of the week has to be given to Kenya for further displaying that the former Miss USA isn’t dealing with a full deck in the head. Andy Cohen brought up Walter-gate and asked the “Gone With The Wind Fabulous’ singer plainly if she brought Walter Jackson on the show to portray her faux-boyfriend. Kenya pretty much answered him as if she was reciting a ‘well-thought out’ press release she probably wrote herself. Also, while the reel featuring all of her and Walter’s ‘best’ moments of the season was playing, Kenya was too busy checking her make-up and looking even more stupid than Sheree Whitfield did this weekend on Iyanla, Fix My Life. It was abundantly clear that the woman prepped for months for this reunion, because she had an answer for everything that was slung her way, using her fan like a semi-skilled gamer pressing the block button on a Mortal Kombat character.

There were plenty of moments where if I could, I would have gladly advised Kenya to exit stage left and have an entire row of seats for some of the comments she made during the hour. During the Walter segment, Andy Cohen mentioned how Kenya attacked the tow trucker’s character by insinuating that he was gay, but the so-called actress clarified that being gay is not a character assassination, which we all knew Andy was very privy to already. While Kenya’s explanation was a good save in terms of not trying to imply that Walter being allegedly gay was a bad thing, she still didn’t fully grasp how spreading rumors and lies about a man’s sexuality (even going as far as making him stereotypically gay in her music video) is still some form of character assassination. In other words, Kenya, you’re a damn hypocrite. Wasn’t she the one up in arms about Phaedra calling her bipolar and spreading lies about her being crazy, but it’s okay to tell the world that because a man doesn’t want to sleep with you then he has to be unequivocally gay?

Then not even 30 minutes later, Kenya insinuated that an AIDS test should be given to Phaedra since Apollo is an ex-con. Um, now how disgusting was that? Well, it’s way more disgusting than “you can’t turn a whore into a housewife,” which is a phrase that has been tossed around for decades now. Yet you want to immediately assume that Apollo has AIDS since he came out of prison? Really, Kenya?

Next there was Text-Gate, which turned out to be another ploy on Kenya’s part to stir the pot 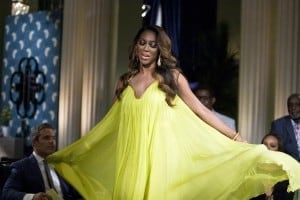 with a measly, plastic fork you might find at the hot plate section of your local grocery store. According to Andy, who Kenya gave the host her phone to read the texts, the messages weren’t even worth bringing up and the three weeks worth of build-up crashed and burned quicker that a snap from Kenya’s fan. Yet she really thought she had dropped a Hiroshima sized bomb on good ‘ole Apollo. Womp Womp. Then there was the question about why would she even want to entertain a married man’s texts to begin with? Yet when someone called her out on her messy behavior, she would start singing the lyrics to her song as if it was a prayer to the Lord himself.Â Um, yea, Kenya. Your seating arrangement is Section B, Row P. Have any seat in that row and just shut the hell up, please and thank you.

But despite all the twirling (yes, twirling) and tomfoolery Kenya put on during the night, the saddest moment had to been when Andy asked everyone on the set (including the husbands) if they thought Kenya’s relationship to Walter was real. No one said a word. I mean I heard nothing but crickets, vibrating cell phones, and the teleprompter ticking after Andy laid that question on the platter for them to chew on. Yes, Kandi surmised that she believed Kenya and Walter were “dating” and were nowhere near the level of marriage, but that still didn’t smooth over the fact that nobody believed for a nanosecond Kenya and Walter’s relationship, making 90% of Kenya’s relevance this year a pitiful joke.

After all that, please tell me that Kenya doesn’t need some form of psychiatric help?

The second half of the night was devoted to Porsha and her marriage to Kordell Stewart on the show. I’m pretty sure plenty of living rooms, dorms, and bedrooms across America got silent once Porsha went to bat for her marriage and her man. However, when you really think about it, the segment was very hard to watch in certain parts, most notably Porsha’s teary testimony to how she stands by her ideals of what a housewife’s duties are and the pressure of being judged by the women she grew up admiring. It was clear that Porsha had no clue about what Kordell was cooking in his lawyer’s office, despite the newbie housewife admitting that their marriage was in a crazy place at the time. Later on Watch What Happens Live!, Porsha revealed how she discovered through Twitter that Kordell filed for divorce and her lawyers confirmed it after seeing the documents on a gossip site. Meanwhile, Mr. NFL himself was over in the next room acting like nothing was going down. So knowing that and watching the reunion tonight makes one think that not only was Kordell the ultimate punk in the situation, but that Porsha probably felt like a bigger fool than ever once she saw the reunion screener after the divorce papers were filed. Sadness all around… 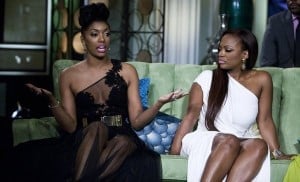 The only thing I loved about the segment was NeNe and Cynthia educating Porsha after she cried about the pressure of being perfect for TV and expressed her frustration at her cast mates for coming at her and her marriage with Kordell. Plus, Peter had the best line of the segment by saying that Kordell should haveÂ been there for his wife like the other men were. As for Porsha’s excuses for why Kordell didn’t show up, it was clear to everyone on the set how that’s all they were: excuses.

With that said, Porsha did make it known how she’s accepted the situation for what it was and is ready to move on to bigger and better things. Even though she’s still living under the same roof as Kordell…

Other Highlights of the Night

– NeNe reading Kim’s text that was sent after Kim Zolciak-Biermann left the studio that day. To me that was a lot better than that watered down make-up session last week. Bravo to the two of them even though I still don’t care for “Wig.”

– Todd’s answers to Andy Cohen’s questions were very short and straight to the point, which came mostly from the guy being visibly uncomfortable being on the set as stated above.

– Kandi pointing out how Kenya had never slept with Walter yet wanting to marry him was very odd indeed. Sure, there are still people in the world who court and save themselves until marriage, but we all know Kenya is not one of those types of people. If she was, then she wouldn’t have whined about Walter not wanting to touch her or walked around naked to get his attention. Just saying.

– Andy Cohen asked on Twitter during the airing of the reunion if he was being “too shady.” My response? His shade was legendary, even though I wish he had of put Kenya dead in her place for coming at him the way she did. Again, Kenya, don’t come for Andy unless he calls for you.

– At the end of the show, Cohen asked each Housewife if they enjoyed the season, which all of them gave appropriately different answers to. However, it was NeNe’s request to search for a new Housewife that brought the last serving of shade for the night (season). When Kandi asked if NeNe meant a seventh Atlanta Housewife should join the show or if one of them needed to be replaced, the Glee star smugly revealed that she meant the latter. Cohen, who clearly couldn’t help himself, asked who should be replaced to which NeNe replied that she will tell him in his office very soon, which will be aired on a May 5th episode of WWHL: One-on-One featuring NeNe. The shade of it all…

So that was the reunion and Season Five of The Real Housewives of Atlanta. What did you think about this season? Great? So-So? Blech? Well, I will say that this is the first time that I actually hate to see any Real Housewives cast leave for the season, because it was just too damn good this year. To me, that is. Luckily, Bravo will give us one more episode called Secrets Revealed, which is pretty much a deleted scenes type episode. Now if it’s anything like The Real Housewives of Beverly Hills Secrets Revealed episode, then I suggest you watch it for the drama that landed on the cutting room floor.

Until this fall, kids! Keep it classy! 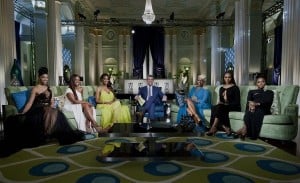