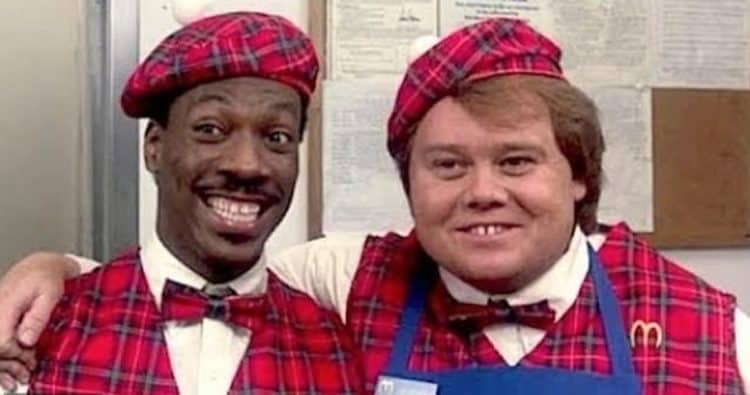 Many folks should know the argument that casting a movie without any diversity is going to bring up, but from a certain standpoint, one can reasonably argue the point that in Coming to America there had to be a pretty big diversity of faces, and not just white and black diversity since New York is a pretty big and diverse place. In fact, the city has been that way for a long, long time now. But since the movie was about a prince from the fictional nation of Zamunda and it was his story, the general consensus between Eddie Murphy and Arsenio Hall was that they wanted to hire an all-black cast. The compromise was that Paramount wanted at least one white face in the movie, so it was that Louie Anderson, who was also a prominent comedian on the rise at the time, was in a way forced upon them and was cast in the movie. One upside was that Murphy and Hall actually liked Anderson since much like them he was someone that was working his way up the comedic ladder and had proven to be quite hilarious for a good chunk of his career. But the overall feeling is that they’d lost a bit of the influence they’d wanted over the movie. The argument of course from a lot of folks might be that if this was a predominantly white cast that a lot of people might say that people would go nuts over there being too much ‘whiteness’ in the movie.

People need to calm down on this matter to be serious since there are plenty of movies out there that have a serious lack of diversity either out of habit, or because they take place in parts of the world where there wasn’t a huge amount of racial diversity. It’s a true statement since if anyone wants to harp on movies that take place in any part of Europe it’s fair to say that there are movies that show diversity, and those that don’t depending on the region. For instance, movies such as Braveheart, which is historical fiction obviously, didn’t have an abundance of diversity. Why is that you ask? Take a look at Scotland’s history and you might not find a lot of people of color to begin with, at least not until the 15th century or later. But that’s the point, movies consisting of one race or another are usually dependent upon the region as well as the time period. Just being thorough, the black population in Scotland has risen considerably over the years, which means that any movies being filmed there might need to be a little more diverse depending on what they’re trying to depict. But not focusing on people of a certain color or race isn’t a problem until a person makes it one.

In the case of Coming to America, diversity was just as much of a must since New York City is populated by more than black people, meaning that there needed to be a diverse crowd if there was to be any realism whatsoever. It’s not reverse racism that kept Murphy and Hall wanting to have a black cast, it’s not even racism, it’s a means of telling a story the way they wanted to tell it, and to be fair, having folks from different ethnic backgrounds as extras was all well and good, but not having any other white faces, apart from the old Jewish man that Murphy dressed up as, was bound to catch the attention of a few people. Folks can take this any way they want and spin the idea of Murphy and Hall wanting an all-black cast as much as they want, but forcing someone on them probably wasn’t the best idea, even though they did get along with Anderson. The fact is that the part of Maurice probably could have been a black man and been just as funny so long as they picked someone that was amusing. But years later this is what we’re talking about thanks to the current issues that people are having thanks to race and diversity. Creating a cast that all belong to the same ethnic group shouldn’t be such a huge issue unless there’s a well-defined plan to exclude others from roles that they might be able to take, but aren’t being given thanks to their skin color. Depending on the context it might not be racism, but it’s definitely discrimination. Of course, context means a lot since if one is telling a story that’s important one group of people that are trying to highlight the issues that they face in the world due to their skin color, religion, culture, etc., then it’s best to allow the feature to focus on their viewpoint. But for Coming to America, this type of issue is kind of ridiculous.