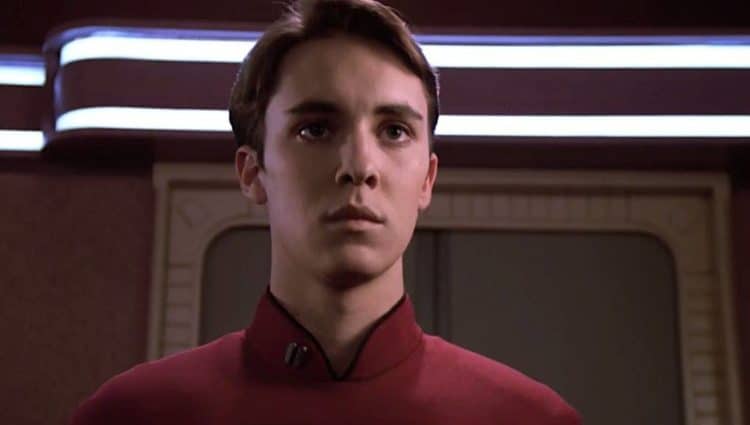 If a person were to ask a random Star Trek fan about Wil Wheaton, aka Wesley Crusher, they might be given a fawning speech as to why the character was so loved, or they might hear a few reasons why the character was just barely tolerated among the fanbase. How a person feels about Wheaton’s character really depends on a person’s perspective when it comes to the show, since some people feel that Wesley was an annoyance while others feel that he was a boon to the crew. To better explain it, the fact is that Wesley was the son of Dr. Beverly Crusher, played by Gates McFadden, and he was a very intelligent young man when he first came on the show. One big problem with Wesley though was that he didn’t initially have the level of experience or the wisdom to that could temper his intelligence and this made him a rather irritating know-it-all that some fans would have loved to see get roughed up occasionally, either in a physical or intellectual sense or both. In short, Wesley is the kind of kid that we’ve all met once or twice in life that is very intelligent but doesn’t know when to simply shut up. His character did grow and mature throughout his time in Star Trek: The Next Generation, but it was usually seen that Wesley was useful when he was the last man standing or when no one expected him to be of much help. This is a pretty normal thing to see in many movies and TV shows as the older cast members tend to think that a younger, less experienced individual couldn’t possibly help them since they don’t know enough about a given situation. Obviously this is a fallacy since younger folks can be a great boon to their older companions, but the generation gap is a barrier that stands between people now and then.

The reason why Wil left, as it’s been stated, has to do with a few factors. For one, starring on the show kind of limited the mobility of his career, meaning he couldn’t do as much if he was going to be a regular or recurring character. He did have to give up a role in a movie titled Valmont when it was determined that a certain episode was important to his character. The downside was that his decision to pursue his role in Valmont led the writers to rewrite the episode and leave him out of it, but something happened, a crossed wire here or there, that prevented him from learning of this until it was too late and his role in Valmont had been given up so that he could come back to the show. Apparently, he started losing faith in the writing crew and that could have easily transferred to his place on the show overall. There’s no doubt that it would be incredibly frustrating to try and work with those that are not only creating a character that’s hard to play since they tend to be unlikable, but Wheaton did try to make it work as much as possible and lasted up until season 4 when his character would finally head off the Starfleet Academy to train, with the understanding that he would likely be seen again. He was actually seen again in later seasons, but his role was greatly diminished as it appears that Wheaton had had enough and stepped away from Star Trek after a while. There was a brief moment in Nemesis when he appeared, and some folks are thinking it would be great to see him in the Picard series, but overall it does sound as though Wheaton’s time with Star Trek is something that he’s left behind without any serious lament, other than the idea that things might have been different had the writers given his character a little more attention and a lot more of a personality.

Some might want to claim that it’s up to the actor to do this, and they’re right to be certain, but poor writing can mess up a character just as much as poor acting. At one point it’s apparent that Wil had had enough and might have just wanted to distance himself from the show for a while, but as a lot of people can tell the fans weren’t ready to let him go. He’d been a part of something that still stands as one of the most loved franchises in the world and as such it’s not entirely possible to really distance oneself from such a phenomenon. Wil has definitely embraced the idea of being loved by the fans, but as far as his career goes he’s been a part of several projects over the years, and Star Trek hasn’t been a huge priority.