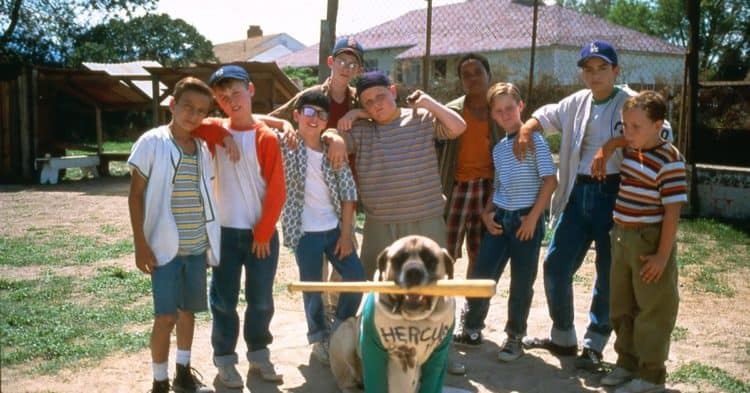 One thing that anyone can count on is that if they have a writer for a friend or a family member there’s a good chance that they’ll find themselves being written into at least one story that the writer will come up with. If they’re lucky, or unlucky, they might find that the story in question will become something that people will find appealing and thus worthy of putting on the big screen. If they’re extremely lucky that character will become a part of a beloved and cherished memory that people will wish to hold onto for years to come. One of those movies that people tend to remember fondly came to theaters in 1993, a short while before technology started to really take over when VHS tapes were still a thing and DVDs hadn’t yet replaced them. It was far removed from the time period that the movie depicted, but it was still a fond memory since anyone that’s ever played on a beaten old lot or had to make their own somewhere in town knows the feeling of getting together with a bunch of friends to smack the ball around and just enjoy the game. Today folks might say that having fun isn’t the main point as winning is what a lot of people strive for, but The Sandlot reminded us that just getting in there to play the game was one of the greatest feelings of all time.

Unfortunately, someone didn’t see things that way since thanks to the way that Michael “Squints” Palledorous was shown on screen, the real Michael Polydoros, the friend of the director and co-writer of the movie, had an issue with how he was apparently being depicted on screen. Yes, you read that correctly, someone in real life had an issue with the fictional character that his buddy based on him. On one hand, there is a bit of an issue since it stands to reason that the director could have switched the name around a bit to avoid this kind of problem, but on the other hand, which is where a lot of people might stand, Polydoros really needed to grow up. The lawsuit was filed against 20th Century Fox in 1994 and dismissed 3 three years after it was filed, though it’s still a black mark on the studio’s record since the fact that it happened is something that some people can’t help but remember. The idea of filing a lawsuit against a production company over something like this is kind of laughable since the truth is that the director did take Polydoros’ likeness and used it in his own way, but the fact remains that Squints was still a likable character and there really wasn’t any issue apart from the fact that he did forcefully kiss the lifeguard, as many people would happily point out today. But apart from that indiscretion, Squints wasn’t a troubling character, except to one guy that apparently couldn’t just laugh it off and had to raise a stink about it.

It’s kind of easy to laugh really since anyone that recognizes their own likeness in a movie should be flattered more than anything unless the representation is meant to be purposefully harmful or seeks to damage their reputation in any way. Squints came off as a kind of smart-aleck kid that was also kind of a know-it-all, but overall he was a part of the group and someone that was listened to above several others. If anyone really noticed though, there were only a few voices in the group that didn’t really speak that loudly and weren’t listened to as much. The input from all of them was what made the group work and made the group such a tight unit, especially since it made them better ballplayers because they could anticipate each other. But Polydoros’ need to fixate on just Squints is kind of funny since it kind of indicates that for one reason or another the guy was insecure as hell no matter the fact that he was already grown at that point. Taking a production company to court for taking one’s likeness is definitely something that might make a judge wonder what they did to deserve the headache that likely came with such a case. In this matter though the judge did agree that the picture was evidence, but it wasn’t enough to claim that Fox had done anything wrong by taking Polydoros’ likeness for the use of their movie. In other words, Polydoros was kind of out luck the moment he became offended at the fictional character that was based on him.

Seriously, a lot of us can probably pick our own likeness out in a movie, but even if it’s being used, with permission at times and simply because a writer has that ability at others, it’s nothing to fret this much about.