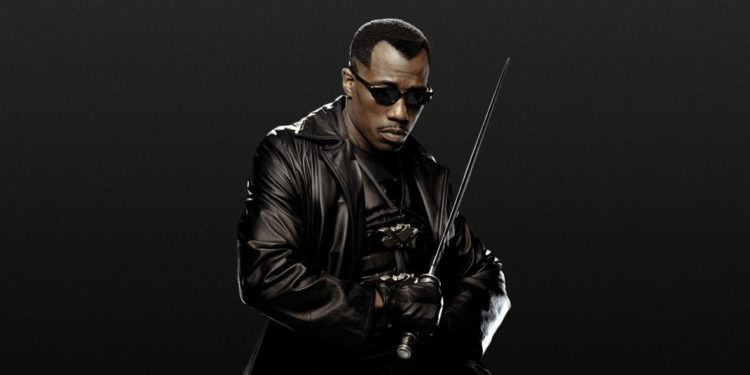 So far the MCU is being pretty cagey about the upcoming Blade reboot, and the main reason that it was left off of the sizzle reel that was revealed not too long ago is that there’s no idea when it’s really going to be headed to theaters since the October release this year could be showing the Fantastic Four as far as anyone knows. But it is rumored that production on Blade will begin this year, which means 2022 could see the daywalker emerge onto the scene in all his vampire-hunting glory. Mahershala Ali is still the only cast member that’s been confirmed, but it’s likely that we’ll see more development take place eventually. Some are even thinking that we’ll see Blade’s daughter make her way onto the screen, though right now there are no plot details to speak of and there’s no telling what the story is going to be about. It is kind of obvious is that it will be quite a bit different from Wesley Snipes’ version, so it’s likely that we won’t see the blood god or any of the other monsters that were seen in the three Blade movies. That might actually be a good thing since up until the main villains were revealed it was seen that the movies were actually pretty enjoyable, but once the final boss fight came along it somehow dropped off in a big way. Blade Trinity was a mess, Blade 2 had some promise, and the initial movie was what we were given, so it was held onto for as long as possible until people no longer minded tearing it apart with criticisms. To be sure, Blade started off with a seriously quick pace since the fight scene in the slaughterhouse was insane, and then everything slowed down to a crawl for a while until it was allowed to pick up again.

One reason I’ve been hesitant to embrace Ali in this role is simple: he hasn’t really proven himself as an action star yet. If there are moments out there that exist and could contradict this statement it’d be great to see, but he’s been great in dramatic movies. He has yet to really show himself in an action role that requires the energy and deadly nature of the character he’s taking on, so it’s still a little tough to throw all kinds of support behind him for that aspect. But as far as acting goes, and the drama he can bring to a role, there’s no worry at all. But for whatever reason, the MCU is keeping this movie under wraps more than any other at the moment, enough to the point that the title was left off the sizzle reel, which was definitely noticed by quite a few people. It’s nothing to worry about really, but try telling that to a legion of fans that are watching every single movement the MCU makes, it’s about as easy as corralling puppies that see a bone they want to chew on. That’s kind of a funky analogy, but it works at this point since people are all over any small rumor or bit of information that’s tossed their way, and it’s bound to happen that as soon as the MCU starts releasing movies into the theaters again that box office numbers are going to soar in a way that will make the Mouse House very happy.

It does feel necessary to state that this version of Blade might be toned down just a bit since the fact that it IS owned by Disney is going to play a big factor in what can be shown and what can’t be. So far the MCU has managed to get away with very little since the beheading of Thanos and a few other things that have taken place have been about the extent of it. But with Deadpool 3 bound to happen eventually the Mouse House is going to have to live with a double standard since like it or not, Deadpool is still Marvel, which is bound to get people asking why more blood and guts aren’t bound to be shown in the rest of the MCU. It’s likely that Deadpool will be seen as a separate story since Disney does have a reputation to uphold, you know, of violence that’s implied and only produces minute splashes of blood, not fountains of it. But with Blade, which is a VAMPIRE movie, it’s going to be a bit intriguing to see how things play out and whether or not there will enough room to add in the crimson that tends to go with this character since a vampire hunter that knocks his enemies out and then does violence to them off-camera is bound to be one that makes Disney happy but will be mercilessly ridiculed by pretty much anyone else. Hopefully it will all work out.