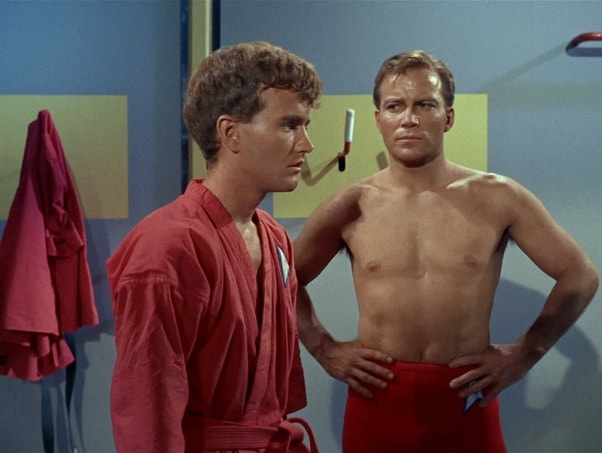 If you can’t figure out the obvious reasons why Captain Kirk would lose his shirt so often then you might have missed out on the idea that sex sells and that William Shatner has had a massive ego for quite some time. Those two driving forces are a big reason why one of the most iconic captains in the history of Star Trek managed to lose his shirt a few times over the course of the show, as the fact is that naked bodies or scantily-clad bodies tend to gain a great deal of attention with a lot of viewers, hence the reason why some of the female aliens weren’t always fully covered. That kind of programming is obviously problematic to some people, but has been seen throughout the years to be quite popular with many others. Plus, given that Shatner has been kind of a male diva on the set of Star Trek and in the movies in the past it’s not much of a surprise that he would find a reason to get his shirt off to drive the women wild (feel free to roll your eyes) and make the men jealous. It’s a rather common occurrence in TV and movies that nudity of any sort will get a great deal of attention that’s either negative, neutral, or overwhelmingly positive. In a way it’s human nature, we love to see what we can’t have or that which makes us envious of others. In this case however it’s kind of laughable since despite being in good shape at one point, Shatner was really showing his own narcissistic need for attention that has followed him throughout the length of his career.

It could have also been to hide the fact that he’s kind of a one-note actor, which some might want to argue with before realizing that he doesn’t have a lot of settings to his character when it comes to his time on screen. In a way it doesn’t really matter what he’s been featured in other than Star Trek, he’s still the same character wherever he goes with only hints and subtle notes of something else to his act that can be picked up and dropped the moment he doesn’t need them. But his character is pretty much the same from one movie, one TV show to another, which has made him a very predictable act for much of his career, no matter how much people have looked up to him as a legend. In a big way, Shatner created a legendary character and rode it as far as he could in order to keep his fame intact and insure that people would keep thinking of him as a star. Obviously it worked, no matter what anyone might want to say. Shatner has been pretty much immortalized in movies and TV over the years, which isn’t a good or a bad thing to be fair, it’s just something that’s happened. Whether a person agrees with his behavior in the past or not it’s not something that can be changed. It’s a bit comical to be realistic, and Shatner has even commented on and played along with the spoofs that have been made based on his character, so even if he is a bit egotistical it does appear that he has a sense of humor, which is a little uplifting to be truthful.

Some might want to even call it a bit of male dominance back in the day, something done to assert himself in a manner that would allow others to realize that he was a big deal and worth paying attention to. There are plenty of those types throughout the entertainment world and throughout the world in general that feel the need to show off their masculinity in a way that makes them appear to be alpha males when in truth they have insecurities they don’t want anyone to know about. Whether that’s the case with Shatner or not is hard to say, but it wasn’t that rare to see him with his shirt off, and if it got the attention of more and more people then it was that much better for the show since it meant viewers would pay greater attention. It might have even allowed the show to draw a few more female visitors since it’s easy enough to admit that Shatner was in pretty good shape back in the day. Once he started getting older and the movies started getting a little more ridiculous however it was obvious that the shirt wasn’t going to come off any longer, which was a good thing. But back in the day he no doubt had many a plan on how to get his shirt off.

Like it or not, the move did gain a lot more views for the franchise.