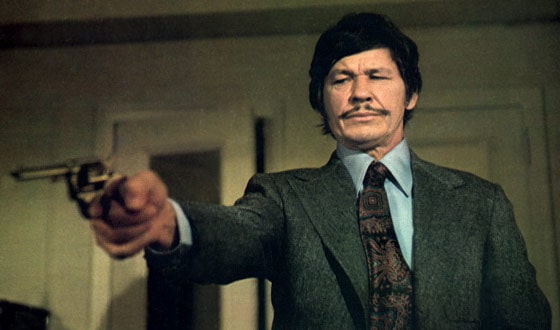 The act of having a relative or someone close to you in a movie usually turns heads since a lot of people will be quick to comment that the individual only got the role because of their relative or because the actor wouldn’t be budged when it came to including the individual in the movie. That’s more or less true when it comes to Charles Bronson, who was notorious for having his wife in the movies with him on a constant basis. Both Jill Ireland, his second wife, and Kim Weeks, his third wife, were in the movies with him for various reasons, one of them being that Bronson was apparently a little hard to get to know and having his wife there made it clear that he’d be able to get the job done due to their chemistry. The most obvious reason though is one that a lot of people tend to gloss over, even if it’s one of the most important. Charles Bronson was a family-oriented man and enjoyed having his family around him at all times. This of course meant that he wanted his wife and their kids around him whenever possible, which made for a pretty sizeable group. Obviously he wasn’t about to put all of his family in the movies, but he did keep his wives by his side.

It does feel as though this would put stress on a marriage or bring it closer, doesn’t it? Some couples can be around each other every possible second and thrive, others might need to have their space and some time away from each other just to keep the marriage strong. Without trying to sound insulting it does make a person wonder whether this was why Charles had three wives in his lifetime, though his first wife was never in the movies with him since he wasn’t quite famous enough and didn’t have that kind of pull yet. By the time he was married to Jill Ireland he was able to make this happen and obviously he wasn’t shy about getting her on set. For the most part, Jill did manage to hang with him on screen and was with Bronson until her passing in 1990. Eight years later Bronson married Kim Weeks, who was with him until he passed away in 2003. In all that time he was still the family man, someone that would want those he cared about close to him. This isn’t something a person hears all that often for various reasons. One could be that leaving a stars family out of their everyday affairs is considered good manners, but if one believes that then they’re incredibly naive.

Charles Bronson was considered one of the biggest action stars of his time once his career started rolling, but beyond the cameras, he was more or less a shy and reclusive person that didn’t even bother watching his own movies. He was also the kind of person that held a grudge since he was a bit resentful that it had taken him so long to become famous. At one point it was said that he even refused to work with a director that had snubbed him at one time in his career. In a way this makes Bronson sound like he was kind of petulant, but it’s likely that he internalized a lot of stuff and took it a little too personally. In some ways that might make him a bit weaker of a person when it comes to how he could assimilate and process the business, but his greatness couldn’t be discounted since he’s responsible for one of the greatest movies to this day that still holds up after all this time. Death Wish was and still is a movie that a lot of people idolize in their own way since it not only propelled Bronson to superstardom, but it also became a massive inspiration for a lot of people moving forward considering the message it sent. To think that Bronson, who didn’t care to give interviews and was kind of a curt and aloof individual, was a big family man is somehow heartening since it shows that despite the face he showed to those that he didn’t know that well, he was a husband and a father first, and he did care a great deal about others. But perhaps the idea that he didn’t get famous quick enough was regrettable since it did sour him to the business in a big way.

It’d be easy to blame Bronson for his attitude concerning the idea of not being famous when he wanted to be, but Hollywood is a rough business and it tends to skip over real talent at times to pick up those that can offer the flash in the pan service that the business needs from time to time. Let’s be fair and say this, no matter how one thinks, he came to prominence when he was needed.