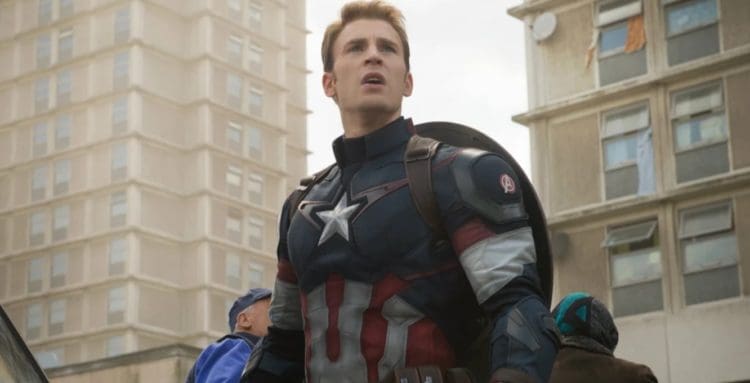 You wouldn’t think that a lot of people would balk at the chance to become famous and be known as one of the biggest superheroes in the world, but there was a time apparently when Chris Evans really had to take a step back and wonder if he could fill the spot of Captain America. The idea of signing up for multiple movies was only a part of what made him suffer mini panic attacks since he’d been wondering if acting was really his thing before being approached to take on the part of Steve Rogers. He’d already become a Marvel icon in the past since he played the Human Torch, aka Johnny Storm, in the Fantastic Four movies, but Captain America is such an iconic role that the pressure it comes with was bound to be something that would dig at him in a way that little else would. He was pursued though and given every reassurance that was needed as it had already been determined that he was the guy that the MCU needed in order to push this idea forward. Obviously he said yes finally, but this was after speaking to Robert Downey Jr. and also realizing that it was the chance of a lifetime that he couldn’t afford to miss out on. The rest is history at this point and as people have seen, Evans took on the role of the shield-bearing hero in a manner that was nothing less than spectacular.

Throughout this history of the MCU, there were definitely plenty of doubters that didn’t believe that the MCU would really get off the ground. For a while, Iron Man was believed to simply be another worthwhile superhero movie that was more or less a standalone project that had no intention of moving forward. But when the post-credit scenes showed up it was a little too obvious that things were about to take a big turn as Thor’s hammer was revealed, Tony Stark was seen speaking to General Ross, and various other scenes were unveiled as the MCU started to gain speed. The first Captain America movie in the MCU was seen as an eye-opener since it didn’t deviate too much from the origin story of Captain America, but it was kind of expected since keeping things as close to the mark as they could be is one reason why Marvel has been thriving on the big screen for a while. Captain America became a big reason why the Avengers were so popular, and his legacy is still being pushed with The Falcon and The Winter Soldier since the symbol that his shield has become is currently a big deal on the show and something that the two main characters, Sam and Bucky, continue to argue about.

It’s not too hard to think that Evans’ panic attack could have kept him from reaching his potential since it’s likely a heady experience to take on such a symbol and reputation since one can only imagine that wherever he goes people tend to think of Captain America. It’s bound to be that way for a long time no doubt since he’s played the role for so long at this point that trying to get away from it would be nearly impossible. Just like his costars, he’s become the character that he made popular when he stepped into the first movie, and it’s likely that people will still remember a lot of the other stuff that he’s done, but will think of Captain America first since it’s such an overwhelming role. It’s kind of amusing to think that Chris suffered several mini panic attacks before stepping into the role of Captain America, and in the third Iron Man movie, Tony Stark was suffering panic attacks after having been Iron Man for so long. There’s not a lot of correlation there, it’s simply something that came to mind and was kind of funny in a way. But what’s really funny is thinking about what Evans had to be like in the Fantastic Four movies, basically, a fresh-faced, carefree, arrogant individual that had to learn how to become a team player, and then what he became during the Captain America movies. That switch was definitely impressive since as Steve Rogers he was the fair-minded individual that believed in truth, justice, and the American way when it meant something.

Thankfully he did finally say yes since despite the fact that there were a couple of guys in line that might have done just fine with the role, it feels as though this was Chris’ role to lose and might not have been quite as convincing with anyone else. But then again, we don’t know for certain what might have happened. All we do know is that a lot of people are grateful that he decided to pick up the shield.