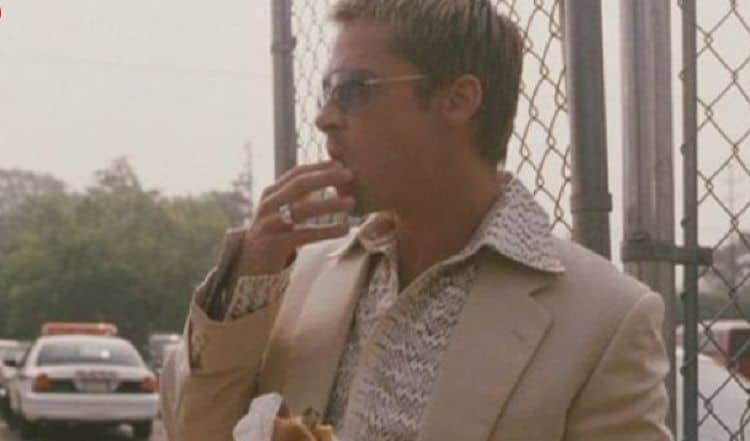 There’s more than one reason why Brad Pitt is always seen eating in his movies, but one of them that some folks like to recall is that he’s been on a couple of movies that didn’t give him a lot of time between takes and he had to find something to eat since he was starving and needed to eat. The idea of filming him while eating wasn’t a hard one to make since it did a lot for his character and it’s been seen that his movies actually do better when he’s seen eating something. This appears to humanize him in some way with the viewers since otherwise a lot of people tend to look at him as an idol since he’s such a big movie star. But in a lot of movies when he’s eating he’ll eat small meals and rarely if ever sits down to really enjoy a full meal. The character of Rusty from the Ocean’s Eleven movies is a good example since almost every time we see him, Rusty has something in his hands and he’s eating or drinking. There are plenty of shots that don’t feature him eating, but for one reason or another people enjoy watching Brad Pitt eat and that’s what usually makes its way onto the screen for that reason.

The guy in the clip is right, eating isn’t always the most attractive thing to watch someone doing since people can get messy, and depending on the dish it can look absolutely disgusting. The octopus-eating scene in Oldboy was just flat out nasty but it was done a few times. But somehow eating does make it clear that the people on the screen are human and can look just as ridiculous while eating as anyone and that they do need to do this in order to continue their existence since it is kind of a thing among living beings that we need consume something in order to survive. But with Brad Pitt, it’s become kind of a part of his whole performance since he’s had to make it look natural but also impressive enough that he’s not getting sloppy with it and isn’t trying to shove an entire burger in his mouth ala John Belushi. Yes, Belushi actually did that as Bluto in Animal House, there was no trick there. But people eating on screen can be gross or it can be an art form since some folks are well aware of how to consume something in a very different way that can make it look good and yet still give that natural feel to it while making it clear that they’re not doing it just for the scene since Pitt does consume quite a bit in some of his movies.

Rusty is perhaps the best example since he’s always on the go and doesn’t sit still that often which means that he’s burning calories and needs something to eat now and then to keep his energy up. But by the end of the first movie, it’s seen that what he’s eating might be getting to him just a bit since a touch of heartburn appears to strike him, which makes him appear even more human since a lot of people can probably attest to since eating is absolutely necessary, but resting while you eat is also a good idea now and again and watching what kind of food you put into your body is definitely a must since too much fast food can mess with your system after a while and too much grease can really produce undesired effects. But the fact that he’s only eating quick and easy to hold foods is usually enough to indicate that he doesn’t stay still for very long and needs something that won’t require him to sit down and spend too much time in one place. In other movies, this is also the case since Pitt really doesn’t play characters that sit around and do nothing. He’s usually pretty active and doesn’t employ a sedentary existence in the movies that often for reasons that go beyond this article, so it’s fair to say that he needs to consume more calories now and then just to keep himself upright.

His eating generally describes something about his character as most articles will tell you and this is very accurate since like it’s been said with Rusty he needs to be on the go all the time and therefore he doesn’t really watch what he eats since he’s burning it off continuously. In other movies, he’s eating stuff that keeps his energy up but it’s not always the same since it depends on the character and what kind of lifestyle they lead. But one thing is clear among all the others, Brad Pitt is one of the few that can make people actually want to eat by picking up just about anything to consume in a movie.