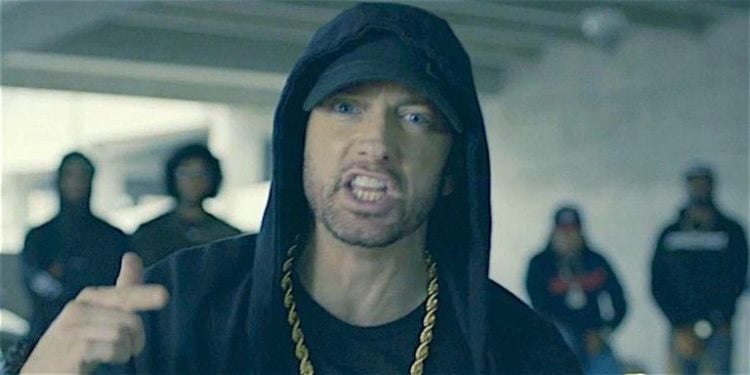 One could almost say that Eminem was making up for a no-show 17 years ago when he performed at the most recent Oscars in a surprise move that no one saw coming. If anyone remembers his movie 8 Mile won back in 2003 and Eminem wasn’t there. No shows do happen from time to time but there was a pretty good reason why he wasn’t there and why someone else had to accept the award on his behalf. At that time he’d taken the time to spend with his daughter and be a father to her for a while and had decided to skip the Academy’s largely because he didn’t think he stood a chance of winning. This is what he had to say as per Jeremy Dick of MovieWeb:

“Back then, I never even thought that I had a chance to win, and we had just performed ‘Lose Yourself’ on the Grammys with the Roots a couple of weeks before theÂ Oscars, so we didn’t think it was a good idea. And also, back at that time, the younger me didn’t really feel like a show like that would understand me. But then when I found out I won, ‘That’s crazy!’ That to me shows how authentic and real that award is – when you don’t show up and you still win. That makes it very real to me.”

To be frank I can’t say that I agree with how ‘authentic’ the award process is, but the obvious note within those words has to do with his younger self and how he perceived things back in that time. Eminem’s style has definitely changed throughout the years but when he was younger he definitely sounded angrier, a little less refined, and more likely to let his youth and his passion flare more often without as much rhyme or reason to it. In a big way that passion has remained in his raps throughout the years even as he’s taken on the same direction of many individuals in Hollywood, but the act of staying away from the Academy Awards for so long has a lot to do with his attitude and how things have changed for him over the years. If anyone remembers watching Eminem come up in the rap game then they likely remember how angry and how nuts he sounded at first since songs like My Name Is and many others appeared to be giant rants that acted as highlights from a life that he was eager to tell us about. That much hasn’t changed, but his viewpoints and what he raps about has changed quite a bit over the years as he went more commercial and attempted to make his story go mainstream.

It’s not too hard to wonder why 8 Mile won back in the day, it was a very powerful movie that was put together in a way that made sense to a lot of people and was very popular with fans. Some definitely wonder if it was based on the life that he told so many about through his music, and for the most part it’s a loose representation of what he went through while growing up. Of course a lot of it is story that was made up to increase the audience’s reaction to it and show the struggle that the main character was going through. The fact that he didn’t believe that the movie would win is kind of telling since the history of the Academy’s shows quite well that a lot of movies that had the merit and the support of the fans haven’t gone on to win, and 8 Mile was definitely a fan favorite in its time since Eminem has been the kind of rapper that people want to hear in this day and age, and he’s been spitting rhymes for long enough that many people figure that he has a good handle on what he’s saying and believes it wholeheartedly.

At this point it’s enough to wonder if Eminem will continue to show up at the Academy’s from this point forward since the outpouring from the fans has been more than enough to indicate that he’s wanted there. Plus, he’s openly admitted that he was in a different place in his younger years, meaning that he might not have seen the point of the awards and could have thought that he didn’t belong there. Obviously this year set him straight on the account since enough people were psyched to see him that it’s obvious he should be showing up on a more regular basis. Plenty of stars from both movies and music show up to each others awards as it’s a chance for celebrities from every venue to get together and enjoy the congratulations they heap upon each other. But the idea of the awards being ‘authentic’ is still kind of amusing. Jen Yamato of the Daily Beast has more to say on this thought.