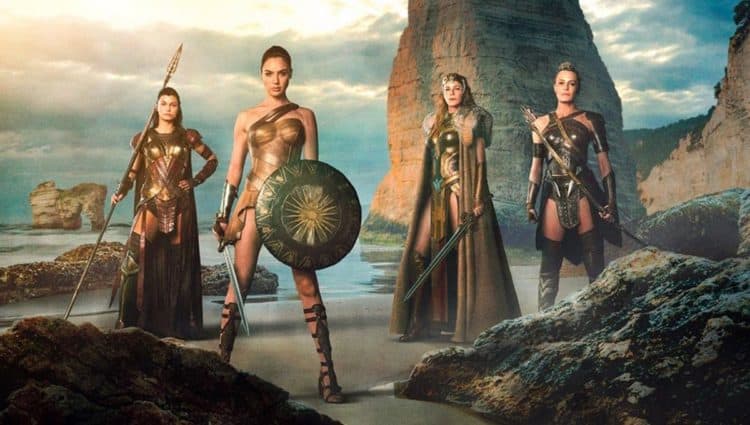 In some ways Wonder Woman eschewing the use of her sword and shield is kind of arrogant as it says that she’s just that awesome and she knows it and doesn’t need weapons to take down her enemies. The thing about that is that it’s the truth since by the 80s she’s had plenty of time to acclimate to the world around her come to grips with the power she holds and the abilities she has. The sword and shield are tools more or less as any warrior would admit since the weapons don’t always make the warrior, as without the warrior in control the weapons are simple implements that are finely crafted and highly useful, but useless on their own. And with the enemies that Diana has been seen to take on thus far there have only been a few in the movies that have been powerful enough to warrant the use of her sword and shield, as fighting Steppenwolf and his army might not have been a good idea without her weapons at hand. But against common enemies such as terrorists and other human adversaries her speed, strength, and reputation is probably enough to make it work. As per Katherine Stinson of ScreenRant, Gal Gadot had this to say about the lack of any weapons on her character:

“We had an intention to let go of the sword because there’s something very aggressive with the sword. If you have a sword you need to use it, so we wanted to give that up and we didn’t feel that the shield was necessary either. She’s a goddess, she can fight, she’s super strong, and she has the skills and the lasso.”

Being a goddess has several perks, and those include being able to take out enemies with her speed and strength alone. But there are those enemies that Diana has that would likely force her to take up the shield and sword again if only because their power is great enough to harm her. One has to wonder if Cheetah, who will be making an appearance in the upcoming movie, will be one such individual that might force her to think abandoning her weapons was such a good idea. It might not come to that however as we can see in the trailer that she’s donned a new set of armor that covers her from head to toe. It could be that she’s still more than a match for her super-powered villain, and that the sword and shield will continue to be absent. With Cheetah however it could be that her new armor might be needed more than people realize since if the movie is going to go by the comics at all then this Cheetah might be able to give Diana good run and possibly hurt her if she gets close enough. That’s a big ‘if’ though since as people also saw in the trailer Wonder Woman can whip that lasso around in an even more impressive way than she has before and can even ride the lightning with it, making her even tougher than some might remember. Thinking of how she might find anyone to give her a challenge is difficult since she is that insanely tough and can wade through most opponents that aren’t strong enough, fast enough, or even smart enough to find a way to neutralize her abilities.

In the coming movie though it’s a bit obvious that something is going to happen that will make it clear that Diana will need something to help her out though, and despite not taking up the sword and shield again it does seem as though her status as a goddess will be in need of a little help. After all Cheetah has been said to be able to pierce Superman’s skin with her teeth and claws, so taking on Diana will create a definite fight that should be kind of interesting to watch. The only thing about Cheetah is that she does seem a bit unhinged and not quite as skilled as Diana, so it’s going to be more of a grudge match to see just who’s going to come out on top. Many people of course will say Wonder Woman and there’s nothing to doubt that, but seeing the heroes in trouble now and again is kind of nice since it does remind you that they do have weaknesses that can be exploited and aren’t bound to be able to just walk through everything. The sword and shield were great for Wonder Woman’s entrance into the world, but as of now they’re not really needed until someone comes along that can offer her the kind of challenge that her bracers, lasso, and godlike abilities aren’t enough to handle. With this movie though it will be intriguing to see how she does without them.