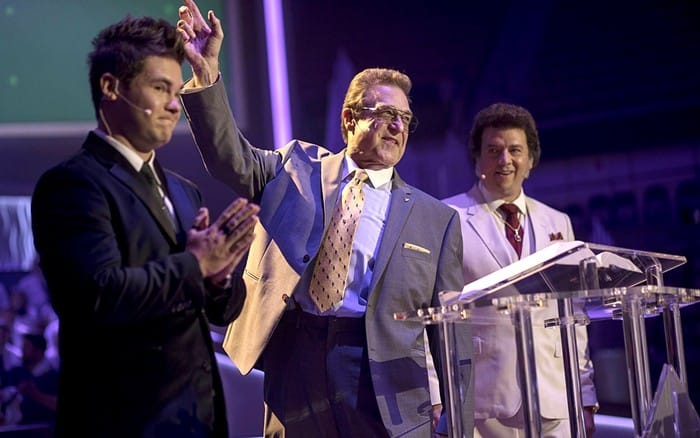 “The Righteous Gemstones” is a new exciting upcoming television series that is expected to premiere on August 18th 2019. The legendary Danny McBride created the comedy show. The series is based in the USA and adopts English as the original language. Its plot revolves around the life of the famous Gemstone televangelist family. The show exploits each segment of the family’s deep tradition of greed, deviance, and even charitable work in line with their religion. It mirrors the state of modern televangelism, highlighting how the work of the Lord has been converted into businesses. As you wait for the series premiere on August 18th, here are some facts about the show that you did not know:

Your much-awaited comedy series has incorporated several high profile actors whose works you might have enjoyed in the past. The show gives you a second chance at getting blown by these stars’ acting prowess. As revealed on Wikipedia, the cast of this show includes the following in order of importance: Danny McBride acts as Jesse Gemstone, John Goodman is Eli Gemstone, Adam DeVine plays Kelvin Gemstone. Other actors are Cassidy Freeman who plays Amber Gemstone, Tony Cavalero is Keefe Chambers while Tim Baltz acts as BJ. Danny McBride and John Goodman are the main stars in the series.

The show was given the go-ahead by HBO on the June 28th last year and later on October 2nd that year, they ordered it. “The Righteous Gemstones” has three very talented and experienced producers. These are Danny McBride as the executive producer and assisted by Jody Hill and David Gordon Green. The series will air on HBO Network.

“The Righteous Gemstones” is solely the project of the celebrity Danny McBride who penned most of the show’s script. However, as the comedy series advanced from episode three going up, he brought others on board. He was assisted by John Carcieri, Jeff Fradley, Grant Dekernion and finally in the last episode by Edi Patterson.

The comedy is expected to consist of six episodes in the first season of its airing. These episodes will be titled as follows : “The Righteous Gemstones” for the first episode. Others include “They Are Weak But He is Strong,” “Wicked Lips,” “Interlude” and finally “Now the Sons of Eli Were Worthless Men.” All these episodes will air on HBO between August 18th and September 22nd 2019.

According to Charlestonscene, The Righteous Gemstones filming was scheduled to take place in Charleston between mid-July and week one of August. The directors were aiming to book around 1500 individuals for the filming. The casting for the filming would be done by the company who had previously worked on Danny’s previous shows,” Vice Principal,” “Halloween” and “Mr Mercedes.” Furthermore, according to the casting company, individuals of all ages, types, and races were welcome in the filming. The specifics of the casting criteria expected to book 500 adults to paint a picture of a congregation, Caucasian adults, black-haired or dark brown haired adults, children aged between 10 and 12 years, crowds of teens and people of Asian race.

6. The show was inspired by Modern Church

Most actors and movie developers draw their inspiration from their surrounding environment. They keenly observe the society and the systems in work and coin out movie themes from it. On Entertainment Weekly, Danny McBride reveals that the current church purely inspired the idea of the show. He claims he keenly looked at the current televangelists with their multimillion churches, private jets, and exquisite lifestyles and the idea came to him.

The comedy series is a clear picture of the current state of affairs in the church, where things are no longer the same. Men of cloth are caught up in scandals, drug abuse, and other forms of immoralities but still preach the name of the good Lord. As revealed by IndiWire, the characters are way off the righteousness gauge of true Christianity. Jesse and Kevin are always in battle trying to outdo each other in almost everything and attempting to bring each other down at the slightest of chances. These two are involved in most of the ungodly stuff such as drugs and immorality.

8. The Series Magnifies the Importance of Mothers in the Family

The show also, to some extent, magnifies how important mothers are to their families. Upon the death of his wife, Eli is entirely overwhelmed by his family. He does not seem capable of keeping the house in order in his wife’s absence. His son, Jesse even appears to be thriving on the grief of his father assuming more control in the family.

9. The series Gives a Picture of How Wealthy Families are Lampooned by extreme Behaviors

With extreme wealth, people expect the ultimate satisfaction and contentment. However, the picture usually is different, as painted in “The Righteous Gemstones” comedy series. Despite the vast wealth that the Gemstone family owns, they are always in wrangles. The brothers are ever in unnecessary competitions and fights while their father is a haunted man. Their sister Judy also harbors feelings of desertion and discrimination from family members.

10. The Comedy Show Highlights Gender Inequality in the Church

The Righteous Gemstones comedy reflects the unexposed gender inequalities in the house of the Lord. It clearly shows how women are not considered worthy to sit at the Lord’s Table. Judy, the family’s only female, is refrained from the altar existing in the shadows and riding in the glory of the male species in the family. She is not allowed to assume any responsibilities in the family’s church business with her father’s frequent insistence that she is not ready for any. Her dumb brothers savor the situation always ridiculing her about her uselessness in the church business.