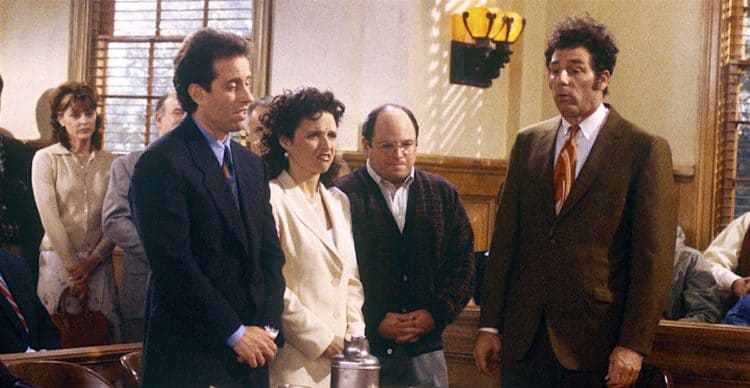 Seinfeld was the confluence of perfect comedic irony. It was also my favorite TV show and in May of 1998, I watched it come to an end. I was one of over 76 million people to tune in to the two-part series finale. It would be another 22 years before I could bring myself to watch it again.

The first time I saw the Seinfeld Finale, I was confused, upset and disappointed. To me, the last installment was not indicative of the tone that the show had established and certainly not representative of its undisputed brilliance. I was not alone. The final episode was ridiculed by fans and critics alike. Fans felt cheated by a lack of closure and critics thought that the conclusion took the easy way out by simply recycling the show’s most iconic moments.

Personally, my overwhelming sentiment was that the last episode should have been better. It felt like the show was making too big of an effort to wrap itself up. Of the finale, Jason Alexander said, “I thought it was a good episode, not a great episode.” In essence, that was why I was initially so disheartened with the 1998 swan song. It was not that there was necessarily anything wrong with the finale. It was good. But good simply did not seem good enough for such a great show.

I have come to the realization that it would have been impossible to find a “perfect” way to end Seinfeld. This is due to the immense expectations that the show had built over 178 glorious episodes. In a 2017 interview regarding the final show, Jerry Seinfeld remarked, “I sometimes think we really shouldn’t have even done it.” He went on to add, “There was a lot of pressure on us at that time to do one big last show, but big is always bad in comedy”.

Upon revisiting the final episode, I have a new appreciation for it. My perception of the last show has changed. I no longer attempt to view the finale as a conclusion of the show but rather a commemoration of it. Instead of making the final show something that it is not, it should be saluted as recognition of the series’ genius. As a vehicle to celebrate the fantastic story lines and legendary characters that made the “show about nothing” the greatest show of all time.

Because of unnatural expectation, it was inevitable that the Seinfeld Finale be considered a public disappointment. The fact is that you can’t please everybody. Seinfeld co-creator Larry David stated, “I think the thing about finales is everybody writes their own finale in their head”. David wrote the final episode. He added that people felt, “Jerry and Elaine should get together,’ and all that. They’ve already written it, and often they’re disappointed, because it’s not what they wrote.” Looking back, the farcical wit that characterized the show beautifully suited the finale.
The charm of the show was that it never took itself too seriously but all the characters were very sincere about it. When it came to the finale, the creators felt that the episode should embody those sentiments and attitudes. According to David, “I was not interested in an emotional ride, and neither was Jerry”. At the time, as a fan of the show, I wished that the finale offered something more of a concrete resolution. But that wouldn’t have felt right. It took me watching the finale again, 22 years later, to finally feel all buttoned up about it.

Seinfeld was a show steeped in clever satire. The element that I have come to appreciate most about the finale is that it displayed that quality until the last frame. It went out the same way it came in. The first dialogue that Jerry and George have in the July 1989 pilot (then called “The Seinfeld Chronicles”) has Jerry comment that the placement of buttons “literally makes or breaks a shirt”. In the last true scene of the series, nine years later, Jerry once again details the importance of button placement on a garment. The final scene fades out as George asks, “Haven’t we had this conversation before?” – A confluence of perfect comedic irony.