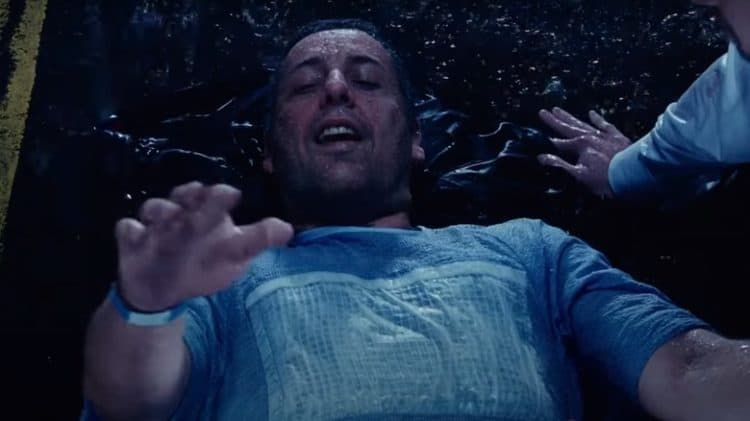 This kind of feels like an ill-timed gag that Adam Sandler might have put together in order to get a bit more notice, but then one has to realize that Sandler doesn’t really need that kind of attention since he became famous beyond measure a while ago. The fact that he has died in several of his appearances over the years should be able to get some folks on board by realizing that his characters have met their end in various ways, though it’s likely never going to equal the death counts of Sean Bean and Danny Trejo. I mean, come on, those guys die so many times that they should be banned from showing up multiple universes at this point. But Sandler’s deaths aren’t always the silly affair that some might think of since a few of them are rather heartfelt and do carry a strong message, much as a person might think. In fact, one of them is kind of tragic in a way that people didn’t expect, especially since it didn’t win him an award. But one thing about Sandler in any movie is that no matter if he gets serious or is bound to stay the irascible man-child that so many people have come to enjoy, he’s likely always going to have that air of expectation about him as people wonder what he’s going to say or do next. He’s made a career out of being a goofball, which means that even when he did start to take on serious roles it was still expected to hear him spouting gibberish now and then and acting like a giant child. Even some of his death scenes have such an air of comedy to them that it’s kind of hard to take him seriously when he does step into a role where comedy is no longer a thing.

In the movie Little Nicky, he died several times, so it’s fair to say that the number of deaths he’s had on screen have been stacked in some movies since as one of the three sons of the devil, Nicky was in line to be the next to rule hell. When his brothers decided to bring hell to earth, however, Nicky ended up finding out that he was half-devil and half-angel. The thing about this is that he had to die multiple times to finally get his feet under him after making his way to earth, and even had to die in order to meet his angelic mother, and then once again to save his father. A good chunk of Sandler’s death scenes come from this movie, which is kind of funny, especially considering that a few of them occurred due to the fact that Nicky had no working knowledge of the surface world. He reportedly had a death scene in Duece Bigalow: European Gigolo, but since it happened off-screen and he wasn’t in the movie for that long it’s fair to think that a lot of people are bound to wonder if this one even counts. It might feel like splitting hairs, but one has to remember that a lot of actors that have a high death count have died in their own movies and have done so in a very obvious manner. But by letting this one go it’s easier to move on.

In Bedtime Stories he was eaten by crocodiles and immolated in different stories, as told by his niece and nephew, so that kind of counts since it’s still happening in the movie, but in Click, his death scene was perhaps one of the saddest since he learned the value of spending time with your family a little too late. After messing around with an apparently magical or metaphysical universal remote control he fast-forwarded a few too many times and ended up losing his father, and eventually having a heart attack before dying in front of his family, on his son’s wedding night no less. One thing about Sandler’s scenes, be they triumphs or deaths, usually revolve around his character and make everyone else secondary, which is all well and good since he is the star of the movie. But others might feel that it’s a LITTLE self-centered. There’s nothing wrong with this kind of thing in Uncut Gems though since after kidnapping a loan shark so that he can make back the money he owes the guy, Sandler’s character is shot in the head, which is kind of a way to use his end as a cautionary tale on what NOT to do when trying to reason with someone you owe money to.

When it’s all said and done, Sandler’s death scenes do run the gamut from silly to meaningful and tragic, but it’s kind of amazing to learn that he actually bites the bullet this many times.