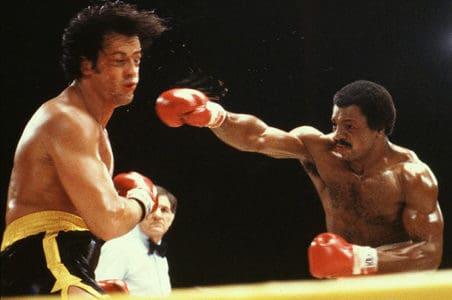 After so much time spent training, stepping into the ring to learn the movements, and being on camera posing as a legitimate tough guy, it still feels as though Jake Gyllenhaal might be more of a boxer than Sylvester Stallone. Let’s be fair and realistic at the same time, the man has spent a good part of his career bringing to life the character of Rocky Balboa, but even in his prime Balboa, a fictional character, wasn’t that great of a technical boxer. He was a bull, charging in and taking the kind of damage that would normally give a person extensive brain damage if it didn’t kill them outright. This kind of fantasy is great for the movies since it left him standing at the end and able to finally spend time with his son and grandchild at the end of Creed 2, but in reality it’s very likely that Rocky might not even remember his own name, and that he would have been close to being an invalid before the fifth movie could have been made. Keep in mind that he did tell Dolph Lundgren, a trained fighter, to hit him for real and wound up in the hospital, delaying the production of Rocky IV for a couple days.

Is Stallone in good shape? Absolutely. Has he learned a few techniques and how to move around the ring? Possibly. But taking into account his size, Sylvester Stallone stands about 5’10” and weighs less than 200 lbs., there’s no way he’d be fighting in heavyweight bouts, and there’s not much of a chance that he would have walked out out of the fight…at all. Dolph Lundgren had plenty of training as a fighter, while Stallone was in great shape but was still an actor without the experience or the physical toughness that comes from having been pummeled in the ring a few times. Obviously from the story of Balboa a lot of people were willing to suspend disbelief and think that a man who stood at 6’5″ and weighed over 200 lbs. could be taken down by a guy that was nearly half his size and didn’t punch like a jackhammer. As it’s been said so many times before: anything is possible, but in this case Drago would have, realistically, left Rocky with the kind of brain damage that Apollo should have been able to deliver in the first two movies. Has anyone ever really watched the first two movies? They actually slow it down for you so that it can be seen how Balboa is taking shot after shot to the head with enough force to knock his teeth into the back of his throat. And people think that a person can survive this, that’s the funny part. The human body might be tough and resilient, but even trained and hardened fighters can only take so much punishment before their body says “Okay, that’s enough, I’m done”.

Stallone has probably picked up a few things throughout the years and it’s likely that you wouldn’t want to call him out unless you were a capable and experienced fighter. But the man is an actor, and unless he’s been taking hits when people aren’t looking and doing some serious martial training in between movies, then no, it’s not likely that he’s all that good of a boxer. One only has to watch his movies to really understand that while he can hit a person and possibly do well in a street fight, where there are no rules, in a boxing ring he’d probably get wrecked in a hurry. Putting him up against a real heavyweight such as Tyson Fury or even an aging Mike Tyson would be the end of Stallone, since just being in good shape isn’t enough. Tyson and Fury are both in great shape but the difference is that their bodies have the physical experience of having been pounded on a few times, which means that they’ve hardened up a bit and they know how to move to avoid the worst damage, and also how to move when they want to really bring the pain. Stallone, for all his time spent as Rocky, doesn’t have that since he’s only had to look good for a few minutes at a time, whereas a boxer isn’t given the benefit of a director yelling ‘cut’ now and then when the scene is over.

As of right now the legend of Rocky Balboa is something that a lot of people want to look up to since it’s inspiring and shows a lot of heart. But woe to those that ever start to think that Stallone was a great fighter because of his time spent in the movies, as disappointment would be the knockout blow to such illusions, and it would be well deserved to be certain.

Why Mark-Paul Gosselaar Has Never Seen Saved by the Bell

Everything You Didn’t Know About 1998s Godzilla: The Series

Inside The Pitch Meeting That Led to Sharknado