Home
Movies
The Snake Eyes Movie: Predictions And What To Expect 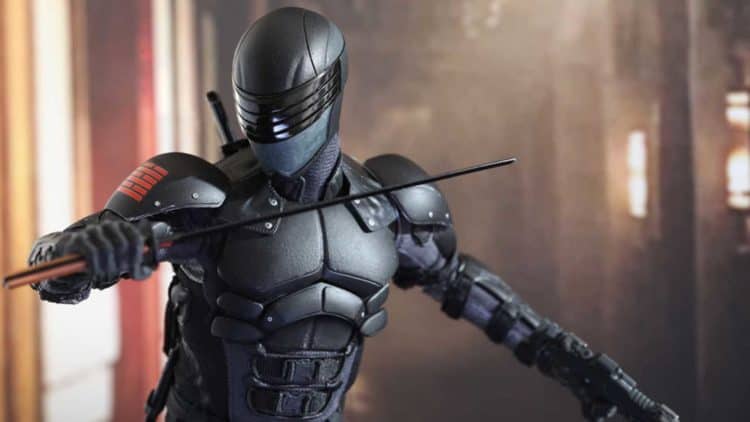 So after suffering through some underwhelming G.I. Joe movies and consistent delays, it looks like we’ll be getting the solo Snake Eyes movie in July. I actually really like the idea of the silent ninja/commando getting his own movie, because why not? Sure, they could’ve gone with the logical choice and just reboot the G.I. Joe franchise, but they tried that already. If you remember Rise of Cobra, it was a fun, but not the best representation of G.I. Joe. Seriously, what was with all the CGI costumes? Well, at least Retaliation fixed a lot of those problems, but it was only a small step forward.

So instead of getting a sequel to that movie, we’ll be getting something that I think will be far more entertaining. Along with Cobra Commander, Snake Eyes is the primary mascot of the G.I. Joe franchise. It’s not hard to understand why, considering he’s basically a ninja with guns, but he’s also known for two defining character traits: he doesn’t remove his mask in the presence of others and he never speaks. Despite that, he is widely respected as one of the most valuable members of G.I. Joe. On top of that, he’s also a massive fan favorite from the franchise, so yes, a solo movie with him is a good move.

Recently, the first images of the Snake Eyes movie have surfaced online, and boy, do they look awesome. We got to see our first look at key characters from the franchise, including the Baroness, Scarlett, and the main rival to Snake Eyes, Storm Shadow. And what of the titular character? Well, we got to see several images of him, only there was something out of the ordinary.

Anyone who is a fan of Snake Eyes knows that he’s the kind of guy who likes to keep to himself. He’s a man of very, very few words, and hides his face from everyone. The images that we saw are all of Snake Eyes without his famous outfit and mask. Basically, we got to see a lot of Henry Golding. Heck, even the poster for the movie has him in his famous tactical suit, but he’s holding his mask at his side. The thing that stands out in the poster is still the face of Henry Golding. I’m not saying that’s a bad thing, but on the other hand, what gives?

Our boy Snake Eyes is famous for not showing us what he looks like underneath that awesome mask of his and keeping silent. Now if the movie is willing to show us a lot of Henry Golding’s face, then I have a feeling he’s going to be talking a lot in the movie. If that’s the case, then the movie would be going against everything that makes Snake Eyes who he is as a character. I can see a lot of hardcore G.I. Joe lovers having a problem with that, but is it really a problem?

On one hand, I would say yes. Snake Eyes is a fan favorite for a reason and in a franchise filled with dull, generic characters, he really stands out. Why mess with the things that makes him such an awesome character? Well, the last two G.I. Joe movies stayed true to that and look how those turned out. Maybe they shouldn’t of given him less screen time than Marlon Wayans, right? Yeah, talk about the obvious, but with that in mind, this is also a totally different kind of movie.

This isn’t a G.I. Joe movie (per se) but a movie all about our favorite G.I. Joe. This movie isn’t about Snake Eyes just being a cool supporting character that just gets to be in a few good action scenes. This movie will dive into the origins of Snake Eyes and give us more information as to how he became the famous ninja commando we all know and love. Sure, the Rise of Cobra did touch on that a little bit, but it was very quick. In fact, that movie also did explain why Snake Eyes was always silent. A highly skilled warrior trained like a ninja taking a code of silence out of shame is typical. The thing is, I think this solo movie can dive even deeper.

The Snake Eyes movie will be telling a lot of origins and giving us a look at his training. Unlike his version in Rise of Cobra, he’ll be a grown man, who is probably looking for guidance. This will lead him to crossing paths with Storm Shadow, the man who will become both his brother and bitter rival. Out of all the things in G.I. Joe, their relationship is by far the most intriguing thing to see. It always shifts from admiration, to brotherly love, to a bitter rivalry, to hostile encounters. But since this is the beginning of Snake Eyes, we may actually get to see the two of them actually talk to each other.

That would be something unusual, but very cool to see. I would like to see how they met and their beginnings of training together. The key element of their relationship is how they became enemies. We’ve seen how their enmity was formed in several G.I. Joe shows and movies, but I think the solo movie is the perfect chance to emphasize on it. Storm Shadow is another iconic mascot of the G.I. Joe franchise and I’m excited to see how this version will build his relationship with Snake Eyes.

But of course, we all want to know if Snake Eyes will become the silent ninja he’s known for. I think if he does talk for most of the movie, then something will have to happen to have him not talk as Snake Eyes. Will it once again go the route of the code of silence? Or they can do something similar to the Resolute animated series where he was shot near his mouth and unable to speak. That would be a more tragic end to his origins, but it would seal his path for becoming Snake Eyes.

What do you think, G.I. Joe fans? I just can’t wait for the trailer and get our first glimpse at what the action will be like.