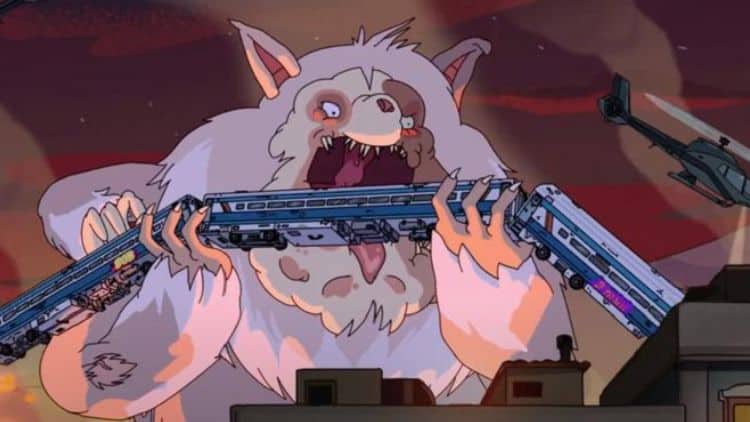 The animated series game is being stepped up a in big way with Solar Opposites since it almost makes Rick and Morty look tame in a way, kind of like Rick and Morty made Family Guy look tame and so on and so forth down the line. All one can say is that it probably stops at the Simpsons since they were one of the more controversial animated shows on TV at one point, and now there’s no way that a person would possibly compare the level of mature content in The Simpsons with the other shows that have come out. David Opie of DigitalSpy has an interesting theory to share about the show. In fact there are only a few shows that could have ever come close to this and South Park would either top the list or be dang close. So far Solar Opposites looks like a group of aliens trying to find their way into human society and simply adapt to their surroundings while finding it impossible to do so largely because they don’t know how to react around humans and have no idea what they’re doing. It also looks like the adult content on this show is going to quickly push past anything that a lot of shows have even dreamed of considering that between the violence, sexual content, and other images things are seriously off the chain already and are only going to get nuttier. And you know what? People are going to watch and they’re going to enjoy it since that’s the name of the game, shock and awe and hilarity all in a handful of carefully placed notes that will keep people entertained.

To say that the point of the show is going to be fairly easy to follow is a bit of an understatement really since as an episodic program on Hulu it will no doubt have various issues that need to be solved with each new show and will have a set of conditions that need to be met in order to keep things rolling along. It’s likely not how it happens but one can almost imagine a giant smoke cloud rolling out of the writer’s room the moment the door opens only to find whoever’s inside giggling like teenagers as they come up with each new hilarious idea and complain about having the munchies. The point is that much like Rick and Morty this show is taking off in a direction that people will be forced to follow if they want to know what’s going on since with each new episode it’s likely that the crazy is going to keep stepping up as people become more and more acclimated to it. To think that anyone would need to do such a thing after watching Rick and Morty, full seasons no less, is kind of hard to swallow, but there are levels of madness that some people have to actively force themselves to transcend.

For those that really do enjoy the spiraling insanity that leads them towards an end that’s hard to see but easy to guess at sometimes this show is bound to be another dream come true. To be fair, there’s nothing wrong with crazy and the show isn’t bound to be for everyone, but that’s the great thing about any series, they’re not bound to be everyone’s cup of tea. Some people didn’t like the Simpsons, others don’t like Family Guy or American Dad, and that’s perfectly fine. Everyone has their comfort zone when it comes to various shows and there are some that push buttons that people simply can’t abide. To think that there was any way to top the craziness of Rick and Morty though was likely hard for some folks to really wrap their heads around since the show has been something that has madness wrapped around it like a snug blanket with only momentary periods of lucidity that act as a kind of barrier for those that just can’t take the nutty all the time. Solar Opposites however looks like a show that’s going to thrive on crazy and use it as its own red carpet to stride down the aisle of insanity with the audience firmly in tow. A little melodramatic, right? Well to be certain it’s bound to be an interesting ride since the show already looks like it’s going top just about anything that came before it terms of sheer, psychotic lunacy. And yet for all that it looks rather hilarious, if somewhat controversial and very troubling in some respects.

It does feel as though plenty of people will have something to say about it, but the question will be if anyone really cares to listen since with each animated show it’s been seen that there’s always a voice of dissent, but the voices of those that enjoy the show tend to be a little louder.