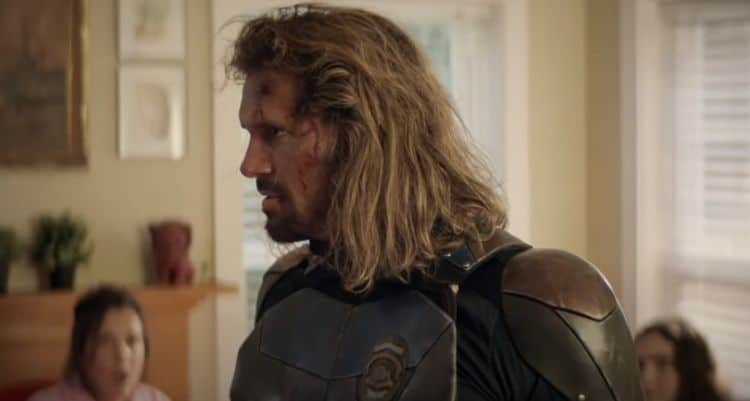 Some movies feel as though they’re meant to be goofy, and this is definitely one of them. The fact that it has John Morrison of the WWE, and Dolph Ziggler, is pretty cool, but the time-traveling aspect of it is kind of, wow. But then again, time travel has always been kind of off-kilter in the movies since to be fair there’s not a lot that people know about it, at least not in a definitive manner. Some folks have definitely attempted to explain it, and some believe they have the secret of it, but at the same time, one can’t help but think that if there was evidence of time travel that 2020 would either be better or a lot worse. In this movie the idea of time travel is something that might make your head spin since to be certain, there’s not a lot of sense to be made from it largely because it’s kind of a goofball movie the whole way through, and appears to be made this way on purpose. It’s likely that few if any WWE stars are ever going to be given an Oscar for their acting skills, as a lot of them are usually good for stunts or for a spoof here and there. But John Morrison has made a decent living as an actor outside the ring and despite his kind of less than professional style he’s funny to watch sometimes.

Movies such as this are usually made for fun and to provoke some kind of thought or reaction from the audience, and obviously this one was going for the latter since the jumbled lines of thought that go into this project make one scratch their head with wonder as to how the future self could exist if the past self was dead. That definitely feels as though someone might have gone back to destroy the egg just to prove that the chicken came first, without realizing that the chicken had to come from the egg at some point. Time travel is definitely one of the many things that people tend to quibble about when it comes to movies since everyone wants the theories to be as accurate and as precise as possible, along with the science of it. But the trick is that fiction can allow for just about anything and as a rule, there’s nothing that’s too outlandish so long as it has at least a bit of support here and there to make it work. Seriously, we’ve seen a movie with sharks hovering around in a tornado, thinking that time travel could work this way for a story isn’t that big of a stretch.

It’s definitely good for a laugh and for something to watch when you need to pass the time, but the hope is that the person making it wasn’t trying to do much else since John Morrison isn’t the best actor apart from the work he’s done as a wrestler and a few other projects that he’s participated in through the years. To be fair to the guy he’s not expected to be a great actor, and the cheesy way he delivers his lines does sometimes feel as though it’s purposeful, meaning that he could probably do a lot better if he absolutely had to. But again, this feels like the kind of movie that was made just to elicit a few laughs and entertain people on a very basic level, and it’s obvious that it does just that since trying to say that it does anything else is more than a little difficult. It works in a way that allows a person to sit back with a bag of chips or a bowl of popcorn in order to feel relaxed and ready to laugh, but that’s about it. In all honesty, though that’s what it feels geared for since, despite the fact that the movie is well done and that it took some doing to make, it’s still something that’s bound to make people snicker and wonder just what John Morrison is doing other than to show up in smaller parts outside of wrestling to pay the bills. Certainly, he’s doing more than that since the guy has made a pretty big reputation in the wrestling world. Maybe he’s attempting to do the same thing as Dwayne Johnson and John Cena but to a lesser degree. After all, he’s not the only wrestler that’s wandered onto the movie scene over the years, as even the immortal Hulk Hogan was known to show up on TV and in movies at one point. Wrestlers must be thinking that there’s more to life than what they experience in the ring since over the years a good number of them have tried their hand at acting. Some have done well, others not so much, but obviously a few of them keep trying.