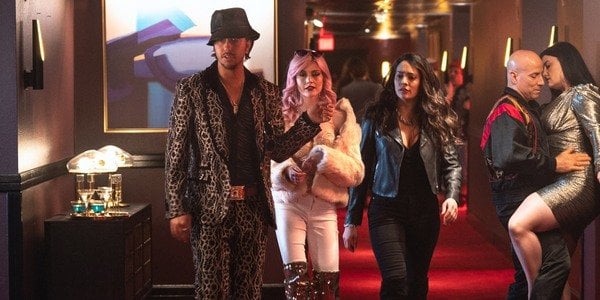 Welcome to the REAL Sin City. Randall Flagg’s version of New Vegas is something that might bring to mind images of Sodom and Gomorrah and the old testament since thanks to the decision to send three spies into Vegas, the leaders of the Boulder Free Zone have unwittingly provoked Flagg into seeking out those individuals. But as it was seen in the book and the first miniseries he can’t appear to track down Tom Cullen, which is kind of interesting given that Tom is hiding in plain sight along with Dayna and Judge Harris. We did get to see that Flagg is beyond any normal human in this episode as, spoilers, Dayna was pretty much fed to Flagg by Lloyd and Julie, who have managed to fit in perfectly to the New Vegas lifestyle, save for the fact that they’re in ecstasy, even if happiness is something that doesn’t appear to be a big priority. The fact that Lloyd can’t perform his more carnal desires when Julie mentions Flagg is interesting in a disgusting way, as is the idea that everyone in Vegas is out for themselves, experiencing the freedom that many might think comes without strings, at least until Flagg decides to pull those strings. There’s definitely something rotten beneath the glamour and shiny veneer of Vegas, but the justification that is being used to give everyone their freedom to do whatever they want has yet to be solidified by the top man as Lloyd and Julie are without a doubt at the head of the table, or at least right next to it.

But where, oh where, is the Trashcan Man? One of the most desired characters yet to be seen in this series has yet to show as far as anyone can tell, and it’s starting to look as though he might have a rather small part in a story that featured him a lot more originally than it has this time around. In the meantime, things are still happening as Harold continues to plan for the coming moment when he’ll make certain to let Boulder know who he is amid a fiery explosion of such proportions that anyone that’s read the book will remember how catastrophic it turned out to be, while Mother Abigail, after attempting to commune with God, has gone on her pilgrimage as she seeks to understand His will, leaving the citizens of Boulder in an uproar that isn’t bound to be calmed by mere words. If anyone remembers, the initial idea of Abigail coming back indicates that her part in the story is essentially over and that her final words to the leaders of the zone will be what prompts their next move. It’s easy to think that things might change once again though since it’s already been established that Whoopi Goldberg has kind of taken over her character and is not playing her strictly by the book. There are some upsides to this and a couple of possible downsides, as one might expect.

One upside is that she’s updated the character to the current era, while a downside is that Mother Abigail feels a little more bitter and argumentative than she ever has before. There are a lot of reasons why this could be a plus, but for those that were expecting Goldberg to simply fall in line, that isn’t about to happen. The veteran actress isn’t someone that’s going to just do what anyone else says, as she has a plan for her character and is being given a great deal of leeway. She’s not the only one that’s changed a bit, since Lloyd isn’t quite as serious as was seen in the original miniseries if anyone remembers, though Julie is every bit as devious as one might expect. Nadine is actually being given a good part though, since she’s playing both sides as she attempts to keep Harold on task while she then attempts to save herself by going to Larry to have sex, in the hopes that this will free her from Flagg. Somehow that doesn’t feel possible, especially since she would likely be condemning Larry as well, and would still be taken by Flagg anyway. The pace of the series feels a lot like sitting in a stick shift with a beginner, meaning it could take off for a short while and then jerk to a sudden, bone-jarring stop as things slow down abruptly.

The way things are going it does feel that the four from Boulder are going to be making the trip eventually, especially since Dayna has already found out that killing Flagg isn’t quite that simple, and that he’s not so easily fooled. Eventually, according to the story, we’re going to see Harold and Nadine make their way to Vegas after the big boom in Boulder, and will see the fallout of Flagg’s plans as his world begins to crumble to nothing. Maybe the Trashcan Man is off doing his thing, and we’ll get to see his character development soon.