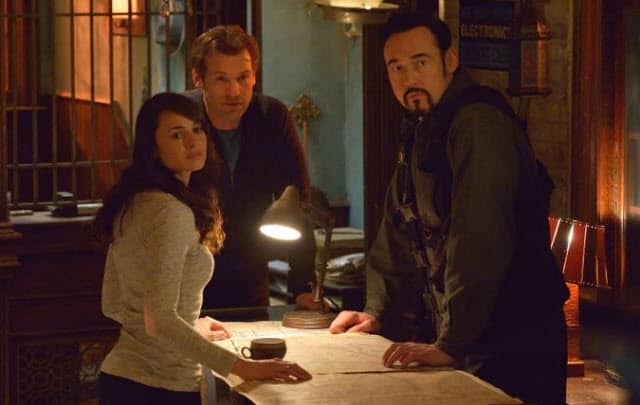 Here comesÂ The Strain,Â barreling towards its season finale with… an episode mostlyÂ spent in Setrakian’s basement? Save for some predictable flashbacks and cringe-inducing Gus material, the motley crue of viral vampire hunters spends their time hunkered down beneath Setrakian’s pawn shop. Is this really howÂ The StrainÂ wants to accelerate the drama of its season, by telling us a story it told us beautifully (and silently) back in the pilot? For some reason, it feels like “Last Rites” forgets that it’s a penultimate episode, too busy re-establishing that Setrakian has beef with The Master and Eichorst to realize things need to get interesting in the final two minutes.

What it makes for is a very lifeless hour of television; since we already know exactly what happens to Setrakian’s wife, there isn’t a whole lot of narrative value in returning to Setrakian’s past to show how he lost his family. We all knew how personal it was to him; how many times has he uttered the phrases “the ones you love”? More so, we saw in the pilot Setrakian’s face when he looked at the beating heart in his basement: that belonged to the woman he loved, a part of himself he was never willing to let go of (or forgive himself for). thanks to David Bradley’s material-elevating performance, a man who is perfectly capable of conveying emotions the script always needs to overtly point out (Eichorst, staring at said heart: “He’s abandoned everything he loved”), undercutting his performance with trivial bits of dialogue – or in this case, fell-into-a-cave stories.

Even the terror of Setrakian’s discovery when returning home falls flat; we saw this same scene play out over the course of an episode in “Loved Ones”, as Eph traced his wife’s path from human to probably-not-human through New York. Silly as those scenes were, they had the advantage of coming first; the repetition of this image in “Last Rites” – with the added ‘shock’ value of his children being turned, children we never actually met alive – is groan-worthy, elevated only slightly by the devastating feeling of loss and panic that Setrakian feels after failing to avenge his family once again, watching Eichorst break into his shop with the vampire apocalypse at his back.

At least with Setrakian, the emotional moments it goes for with his character are plausible; all season,Â The StrainÂ has went for moments it hadn’t earned or deserved, rendering everything silly and superficial as characters bemoaned the deaths of people we never met, or Eph spent time worrying about the son he never spent time with, or visited, or lived with anymore because he ruined his marrige and was sleeping with his assistant. Sadly, Setrakian’s desperation is a lone star among the dull collage of scenes that is “Last Rites”, which alternate between Dutch re-assuring Fet that she isn’t 100% lesbian and Gus robbing a drug dealer and getting kidnapped by that unexplained vampire militia group running around New York, murdering vampires and standing around in their We’re Going To Be Important in Season Two poses.

There is one other moment that is emotionally satisfying, but it’s not intentional: Nora chopping off her mother’s head at least eliminates one of the most useless characters on the show, a constant annoyance in the background whining about random things and smoking cigarettes, both apparent side effects of Alzheimer’s. She didn’t add anything to the show, more often holding back a character who already had a world of characterization problems in a holding pattern; with her mother as a constant distraction, Nora wasn’t able to get the kind of character development she needed to make her “Heartbroken Girl on the Side” story line work . And when they tried, her and Eph have sex in his ex-wife’s bed, a scene that only existed so we could see her face when he said “I love my wife”: hardly the kind of intriguing character development. I don’t see Nora cutting off her mother’s head asÂ addingÂ to her character much: but she served an important function tonight, displaying some serious talent swinging a long blade (while crying, nonetheless; her aim was strong and true, though) and ridding us of one ofÂ The Strain‘s most pointless presences.

And then there’s the ending of the episode, a scene that complicates the mythology of The Master (he converts Eichorst with a worm, but he heals Palmer with a drop of blood? What?), and also forces us to look at The Master’s ugly, hilariously B-grade face again, prosthetics that are impressive in their intricacy, but impossible to take seriously as a frightening, abundantly dangerous presence,Â The Strain‘s equivalent of the devil incarnate. Is The Master just appeasing Palmer until he doesn’t need him anymore – in fact, why does he need Palmer anymore now that the night is long, and the fall of man is nigh? Does the Master have a crush on him, or just a strict moral code when it comes to handshake deals? There’s really no explanation for why Palmer is kept alive, except for the smirking by Eichorst and The Master that there are nefarious things to come – nefarious things involving Eph’s wife, we can only presume, another one of the show’s least-developed, yet still integral to the plot characters.Â In other words, an underwhelming end to another lukewarm episode ofÂ The Strain, an episode with glimpses of potential (or at least, entertaining competency) buried under a sea of silly, weightless moments and wooden dialogue.